Michael Strahan stands at a strapping 6ft 4inches and so you’d expect his appetite to be substantial – which is why his social media followers were in a tizzy over his latest post.

The Good Morning America host and former NFL star sparked a mass conversation between his fans after sharing a simple image of his dinner on Instagram.

In the shot, there was a small piece of salmon accompanied by a head of broccoli which had been cut into pieces. Michael captioned the post: “Easy, simple, and healthy dinner. BBQ Salmon (yes, it’s a thin piece LOL) with roasted Broccoli. What should I eat for dessert? LOL #ChefBoyarStray.”

The comments section blew up with people insisting this was not a meal for a man of his size.

“I know ur still hungry,” one wrote, while a second added: “The other half of the salmon!THAT is not enough for the giant that is you! Plus, it’s totally healthy! Eat up,” as a third commented: “That’s not enough for anyone. You need another piece and more broccoli.”

MORE: Michael Strahan opens up about working with George Stephanopoulos on GMA

Many others said he needed to have something very naughty for dessert.

The snapshot comes one day after Michael delivered a heartwarming message from inside his home.

The star is typically upbeat in his Instagram posts, but paid a subtle and poignant tribute to his late father, Gene Strahan, who passed away in 2020.

The TV favorite was recording a podcast at home, and shared a photo of himself sitting at his office desk with a photo of his mom and dad behind him. 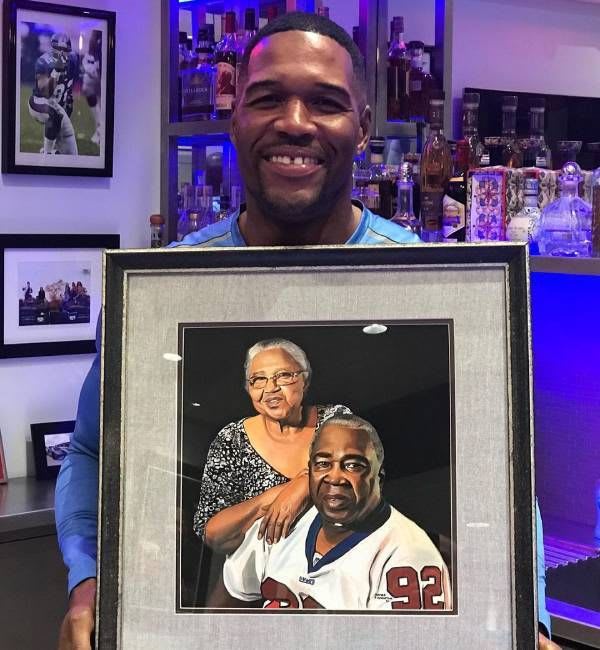 Michael recently paid tribute to his dad who died in 2020

In the caption, he wrote: “It’s the little things in life. Recording a podcast and got this shot of my mom and pops behind me. I know they are proud of me.”

Michael’s father died at the age of 83. Gene had been married to wife Louise since 1957 and they spent 63 years together raising their six children.