The Queen had a very different official birthday today as the lockdown in the UK. The social distancing measures meant that the traditional Trooping the Colour parade took a different approach to celebrate the monarch’s official 94th birthday. The event took place at Windsor Castle, with a short military ceremony performed by 1st Battalion Welsh Guards.

The special event took place in the Quadrangle at Windsor Castle, where the Queen has been isolating with 99-year-old Prince Philip.

The royal event was broadcast on the BBC with commentator Huw Edwards saying: “If you’re lucky, you’ll catch the twinkle in Her Majesty’s eye” as the Queen looked on at the guards.

The guards had to maintain a two-metre distance at all times, while music played by a Band of the Household Division.

The Queen wore a special brooch with a hidden meaning in a nod to the Welsh guards who performed the march. 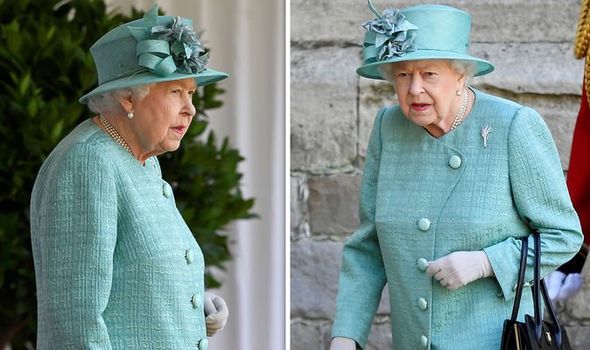 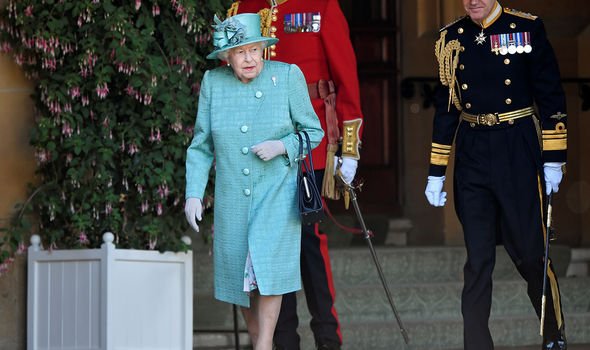 Wearing a mint green suit and hat, the Queen accessorised her turquoise outfit with a diamond brooch that held a special meaning for the guards.

The Queen always wears the same brooch each year for the Trooping the Colour celebrations, the Guards’ Badge.

The Grenadier Guards badge features a leek for the Welsh Guards, with the Scots Guards’ badge (a thistle) on the left, Coldstream (St George’s Cross) at the bottom and Irish on the right (shamrock).

However, as a tribute to the Welsh guards who performed the unique ceremony for today, the Queen wore a different brooch –  a diamond leek on its own.