It takes guts to recreate a look worn by Beyonce, but Zendaya pulled it off to perfection. While attending the 2021 BET Awards, Zendaya wore the same sexy dress that Bey rocked 18 years earlier.

Zendaya looked absolutely flawless when she showed up to the 2021 BET Awards on June 27. The singer/actress wore an incredibly sexy, plunging purple Versace dress, which featured pink and green fabric across the center and down one side. The sheer dress, WHICH YOU CAN SEE HERE, had a slit up one leg, allowing her to show off her long legs as she posed for photos and a video, WHICH YOU CAN SEE HERE. Zendaya paired the purple ensemble with matching, open-toed heels, and wore her hair slicked back into a low ponytail. Her gown dipped low in the back to show even more skin from behind, as well.

The look was fully inspired by what Beyonce wore for her performance at the very same award show back in 2003. Bey’s version of the outfit was much shorter, but featured the same low-cut neckline and fabric that dipped extremely low in the back. The 2003 BET Awards were one of Beyonce’s first major performances as a solo artist. She sang her hit “Crazy In Love,” and obviously turned heads in her teeny-tiny outfit. 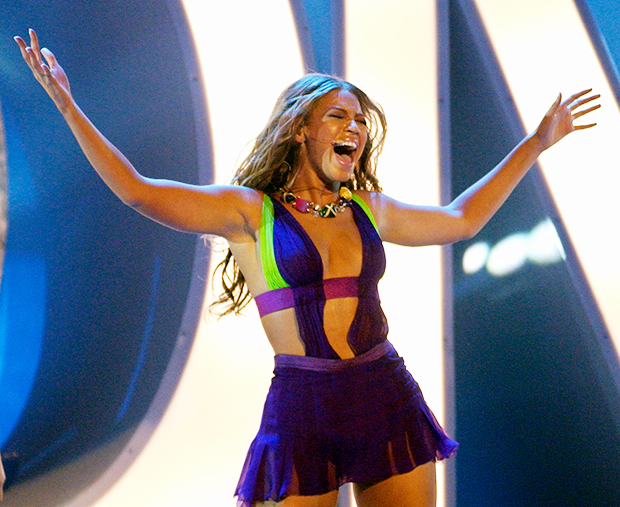 “Crazy in love,” Zendaya captioned one photo of her look, while she added, “2003” in another caption. Comments immediately began flooding in on her Instagram posts from the night, with fans and friends gushing over how incredible she looked. Zendaya’s stylist also took to Instagram to show off the look, writing, “Paying homage to the Queen Beyone wearing Versace SS2003. Get you a stylist with a[n] ARCHIVE!!!!”

Zendaya has always admired Beyonce, and she hasn’t been shy about letting the world know it. Back in Sept. 2020, when Zendaya celebrated her 24th birthday, she got a special message from Bey on the singer’s website. “HAPPY BIRTHDAY ZENDAYA,” she wrote, alongside a baby photo of the starlet. Zendaya reposted the message to her Instagram and admitted, “Never shutting up about it.” We don’t blame her!