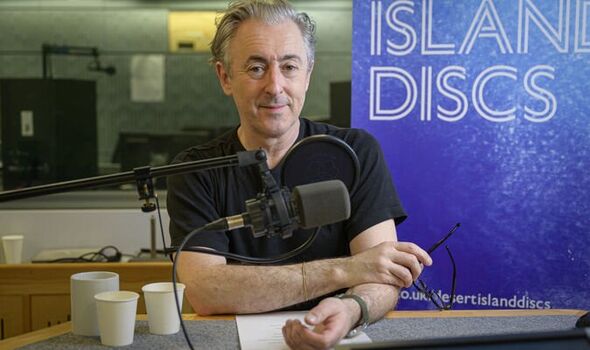 The praise made him stick with acting and meant that his father never broke his spirit. In an emotional interview on Radio 4’s Desert Island Discs, the Scottish-born award-winning actor, 57, recalled how his father Alex abused him, his brother Tom and their mother Mary. It would cast a shadow over his teenage years in particular, and he said: “He was out of control.

“He was very abusive mentally, emotionally and physically to me and my brother, and I sometimes felt terror for my life.”

He recalled Alex was obsessed with Alan’s hair and would drag him to a shed, cut it with sheep shears and “got great pleasure in hurting me”. As an adult he would vomit when he went to get his hair cut.

He recalled his mother “was terrified too but I always felt completely loved by her.

“But my dad literally told me I was worthless and my mum told me I was precious. And I knew she was doing it because, well, she meant it but because she was trying to counter my dad.”

It was his drama teacher who boosted his confidence. Alan told host Lauren Laverne: “It was the first time anybody said I was good at anything. So I stuck with it.

“My dad did not break my spirit.

“I feel the qualities you need to deal with somebody who is an adult who is abusing you and you are powerless are good qualities to being an actor – listening, pretending you’re not feeling what you’re feeling, not showing fear.”

As his first marriage ended in 1993 and he struggled with his past, his mother suggested he and Tom went to see Alex. They said they wanted him to be part of their lives but only if he acknowledged what he had done and tried “to heal with us”.

But Alex never got in touch and 17 years later, as Alan was about to appear on Who Do You Think You Are?, he lied that Alan was not his biological son. After taking a DNA test Alan phoned Alex “to disappoint him that I was his son”.

“I knew he was dying of cancer and stuff and told him he had been a coward because I had been the one to go and find out the truth and he had used a fallacy of what he believed as a justification to abuse me.”

As he hung up he had wanted to say they would speak again but added: “‘I won’t talk to you again, but take care’. So I said goodbye to him.

“I was in my trailer in South Africa and I was in full drag because I was playing a transvestite.

“It was just perfect. I thought if my father could see me right now, it would be his worst nightmare.”

He said he nearly turned down director Sam Mendes who asked him to play the emcee in Cabaret as “musicals were seen then as a bit more frilly and frothy”. His 1998 Broadway performance won seven awards, including a Tony.

● Desert Island Discs is on Radio 4 at 11am today.