Angelina Jolie looked so chic in a charcoal pleated pant and a scoop neck gray sweater as she stepped out for a shopping day with son Pax.

Angelina Jolie, 46, and son Pax Jolie-Pitt, 17, enjoyed a mother-son shopping date in Beverly Hills! The pair were spotted shopping for new sunglasses at the Optometrix store, located on Beverly Drive, on Thursday, Aug. 12. Angelina and Pax browsed several designer brands, including styles by Spanish luxury brand Loewe, as they walked through the store. Pax was later seen carrying a black bag from the boutique, seemingly having picked out a pair. 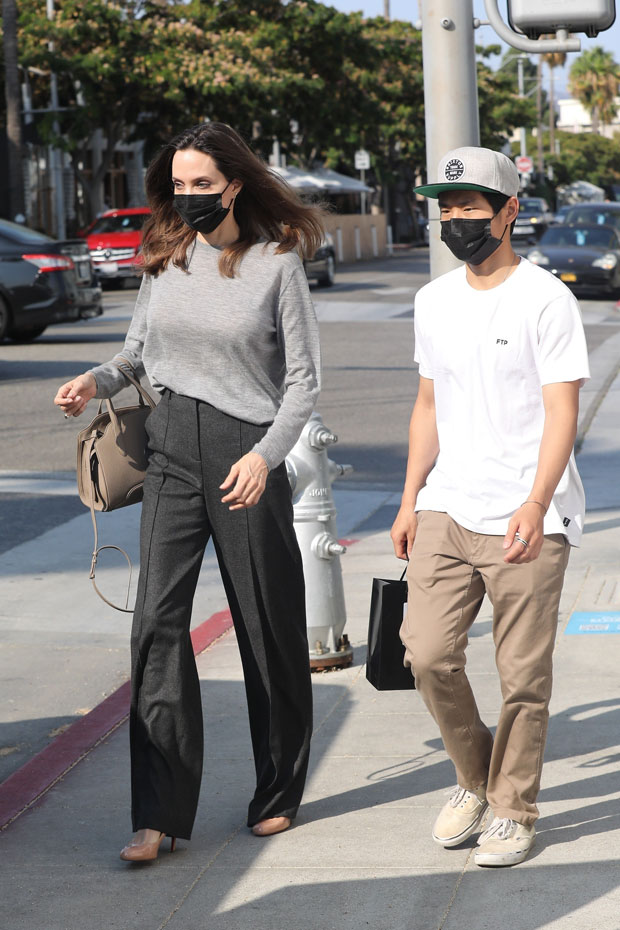 The Lara Croft actress looked so chic in a wide-legged charcoal dress pant for the outing, adding a light gray scoop neck sweater for a tonal look. She finished the look with a round toe nude shoe and taupe handbag, keeping her face partially hidden behind a protective black face mask. Meanwhile, Pax stayed casual in a camel colored chino and white FTP t-shirt (an acronym for streetwear brand F***THEPOPULATION), along a baseball cap and white sneakers. The hat appears to be a favorite of Pax, who has been spotted with it in both LA and NYC. 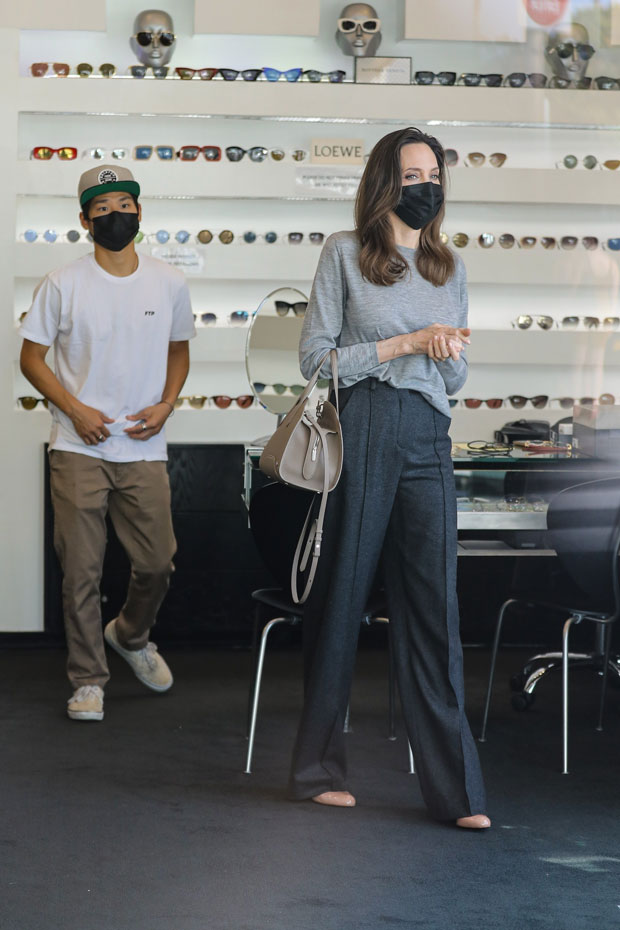 The 17-year-old has had a busy summer traveling so far, following trips to both New York City and Paris. He was spotted going for a stroll through the historic French capital with sisters Shiloh Jolie-Pitt, 15, and Zahara Jolie-Pitt, 16, and younger brother Knox Jolie-Pitt, 13, on July 22. The group were specifically spotted hitting up streetwear hotspot KITH, best known for their own branded sweats and extensive, hard-to-find sneaker collections. Notably, Angelina does have some ties to Paris: while her late mother Marcia Lynne “Marcheline” Bertrand was American, she was of French-Canadian descent and spent time in Paris.

Angelina’s family outings haven’t slowed amid her custody battle with ex Brad Pitt, 57, over their five of their six kids (Maddox, 19, is now a legal adult, therefore, the agreement only applies to minors Pax, Zahara, Shiloh, and twins Knox and Vivienne, 13). Brad was granted joint custody in early 2021, however, Angelina has fought the legal decision. “Brangelina” originally linked up romantically in 2005 and married in Aug. 2014, before splitting just two years later.