In case you haven’t heard yet — and if not we do ask that you sit down and brace yourself — Ansel Elgort was accused of sexual assault on Friday.

A woman known only as Gabby told her story on Twitter of reaching out to the star back in 2014 and being surprised to get a response. Even though she told him she had just turned 17 years old, the then-20-year-old got the teen alone and had sex with her. Even though she was “sobbing in pain” and he knew she “didn’t want to do it.” His response, according to the young woman?

If all of this is shocking and unbelievable behavior from the Baby Driver star, maybe it’s because a lot of people weren’t paying enough attention to how sketchy he’s been all this time.

Rewind to 2014, when the man who would be known as DJ Ansolo was just getting big in a pair of movies aimed at tweens and teens, Divergent and The Fault In Our Stars.

That year — the same year Gabby says he violently, callously took her virginity against her will, giving her PTSD for years afterward — he was already talking himself up in a totally douchey way. He referred to himself in the third person. He told really fake-sounding stories about how great everyone told him he was. But having a big ego is par for the course with a lot of Hollywood stars. It’s gross but not dangerous.

However, there was also another aspect to his public persona. Ansel spoke about himself like some kind of American Psycho superfan might. In a GQ interview from the time he actually said this:

“Girls love it when you have some weird nerdy thing in your room. It makes you look less threatening, even though I’m, like, very threatening. I’m the most threatening guy ever.”

A guy starring in movies aimed at a very young audience, talking about how to hide how much of a sexual predator you are when you invite girls over. Even calling himself “threatening.” At least some people noticed; a writer for Complex called the quote “lowkey rapey” in a really prescient article way back in 2015.

As more stories come out about his inappropriateness with younger girls, it all looks almost too obvious in retrospect, doesn’t it?

How did YOU feel about Ansel before all this?? Let us know in the comments (below)! 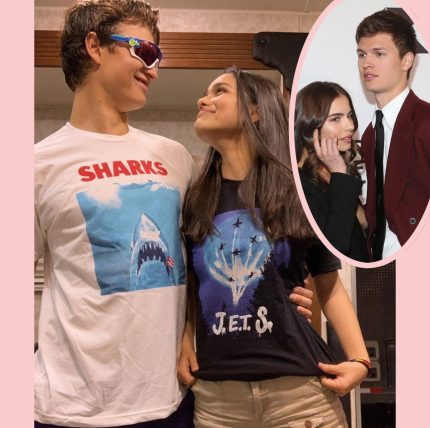