After Ben Foden’s pregnant wife Jackie expressed her honest opinions about how the coronavirus spread on her Instagram page, she was accused of being racist after she questioned: “Is that fair?” The rugby star’s new spouse received a lot of backlash following her statement.

Jackie wrote to her 7000 followers: “China owns a lot of US’s debt, BUT how much death and danger have they put us in, and how much money and time and energy have we exhausted because of it, caused by China’s diseases that keep coming out of there, either accidentally or intentionally?”

She then posed the question: “Is that fair?” and continued to explain: “Like if I owe u a $100, and then you caused a bunch of deaths in my family, and I had to spend a lot of time, money and energy to prevent further deaths, do I still owe you that $100?”(sic)

Jackie then told the country: “Like, clean your s**** up China, this isn’t the first time this has happened. #forgivethedebt.”

Once the entrepreneur said what she needed to say, one of her followers criticised her for racism and called her out for being an example of “White American Privilege”. 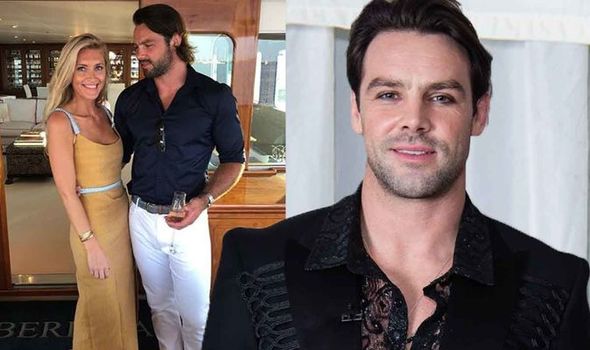 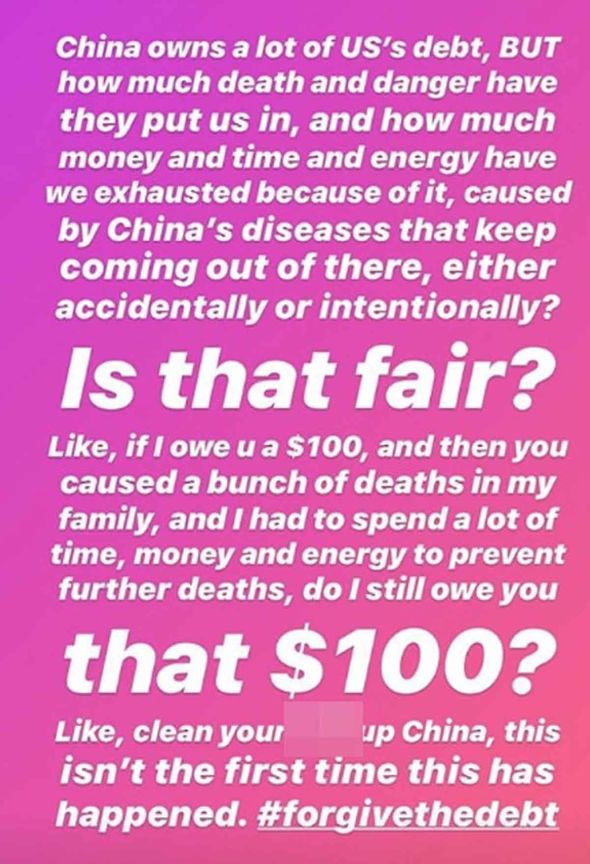 They wrote to the wellness businesswoman: “Eh racism isn’t particularly helpful right now. I don’t think USA is suffering like countries in the Third World that do and are repaying debt to USA. White American Privilege…”

Jackie then shared one follower’s response and her subsequent reply, hitting out.

She introduced the screenshot with: “And anyone who thinks I’m being racist, can go ahead and get f***** and go hit that unfollow button bye.

“All these diseases coming out of there, either from poor regulation of meat centres or poor regulation from labs, or they intentionally are doing it to cull their population, which, with this very convenient disease that only kills old sick people, just seems a little too convenient,” she continued.

She then went on to express her point further and stressed that it isn’t fair that they have to “bankrupt their economy”.

Jackie explained: “It’s not fair that we have to bankrupt our economy to deal with it, while still owing them the same amount of money?”

“I’m not hating on the Chinese people, I’m talking about the government. That’s it,” she concluded.

Express.co.uk has contacted a spokesperson for Ben Foden asking for a comment.

Jackie is an entrepreneur who runs her wellness and beauty company based in New York, The Goddess Line.

The businesswoman has also had her turn at acting, as she’s starred as an extra in And After All and At Home with Mystic.

Once they were a married couple, the rugby player shared their happy news on Instagram and dedicated the post to Jackie.

He wrote to his followers: “I met a girl who seriously swept me off my feet and in a time of hardship showed me love, a deep devoted love.”

Jackie also shared a picture following their big day: “08.03.19 I just married the most incredible brilliant beautiful loving person I have ever been blessed to have met. Thank you for loving me @ben_foden.”

Soon after she posted her selection of pictures, her friends rushed to comment to congratulate them both.

One wrote: “Awwwwww congrats, my love! So happy for youuuu.”(sic)