‘There are people dying’: Charlotte Crosby is slammed for ‘mocking’ coronavirus fears with a ‘Bali b****es’ face mask at a hen do in Sunderland

Charlotte Crosby has been accused of mocking coronavirus fears by wearing a ‘Bali b****es’ face mask at a hen party.

The former Geordie Shore star, 29, was throwing a surprise party for her friend at The Palm in Sunderland and supplied all the guests with personalised face masks ahead of their trip to Bali.

Even though there aren’t any reported coronavirus cases on the Indonesian island, Charlotte decided to get the girls matching black face masks embossed with gold writing. 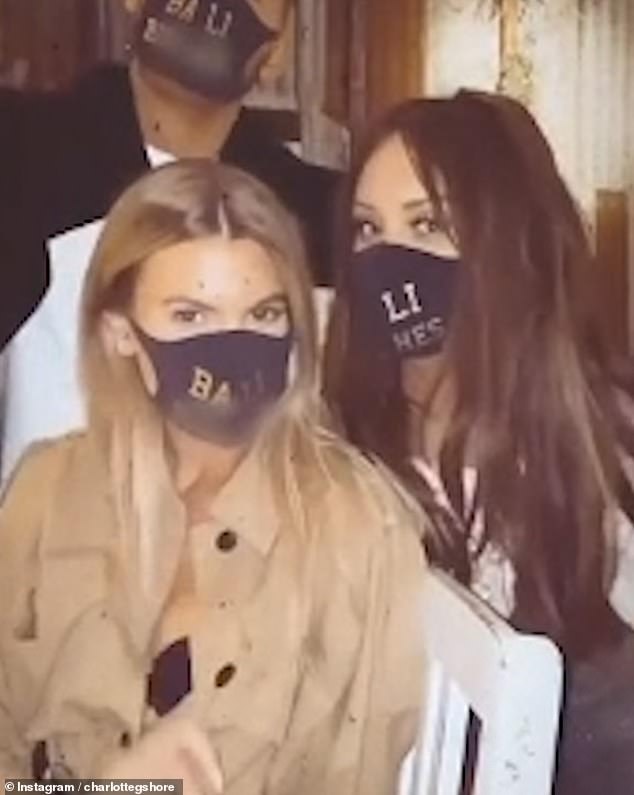 She captioned pictures from the night by writing: ‘When the hen do reveal goes amazing! Best friends forever. Bali b****es.’

However, fans almost immediately started berating her and accusing her of mocking the viral epidemic, which has killed 3,661 people so far.

And according to The Mirror, she even started deleting negative comments. 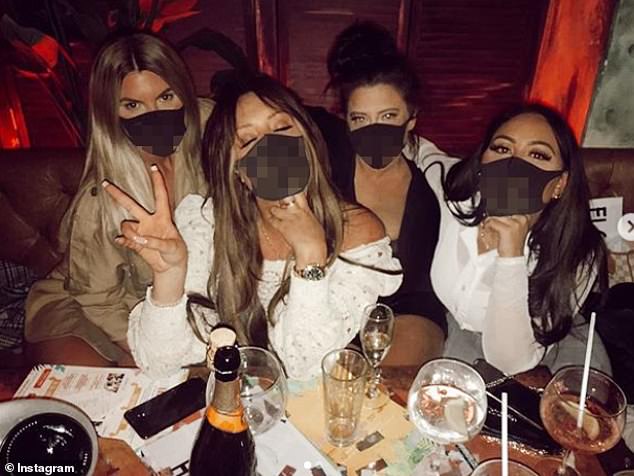 ‘Bali b*****es’: Even though there aren’t any reported coronavirus cases on the Indonesian island, Charlotte decided to get the girls matching black face masks embossed with gold writing 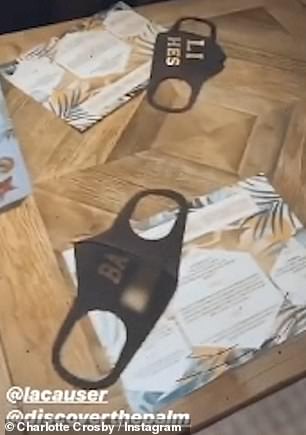 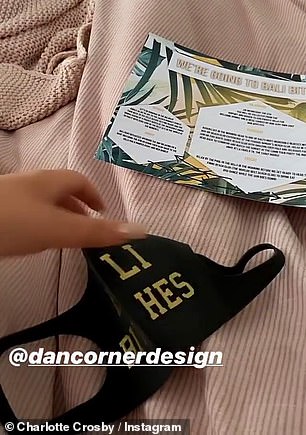 Slammed by fans: She captioned pictures from the night by writing: ‘When the hen do reveal goes amazing! Best friends forever. Bali b****es’

One fan wrote: ‘Why have you deleted all the comments calling you out about how poor taste those masks are?’

Another said: ‘This photo is just a no, there are people dying and you’re mocking a serious cause.

While another said: ‘This is in poor taste.’

One fan said: ‘This photo is just a no, there are people dying and you’re mocking a serious cause. Can’t stand you anymore’

But other fans were able to see the funny side and even asked where she got the personalised masks from.

The reality star is celebrating her single life again after ending things with her I’m A Celebrity Get Me Out of Here! Australia boyfriend Ryan Gallagher.

After a whirlwind romance in January, the pair split due to the distance but insist they are still friends.

Speaking to 10 Daily, Charlotte said: ‘When me and Ryan came out of the jungle I made no secret that I had been in a very long relationship and I wasn’t ready to jump into another one.’

She continued: ‘I still wasn’t looking for something serious, he’s at a stage in his life where he is – so we came to a mutual decision that we’d just cool it off.

‘We are still friends. I love that boy to bits, he’s amazing.’ 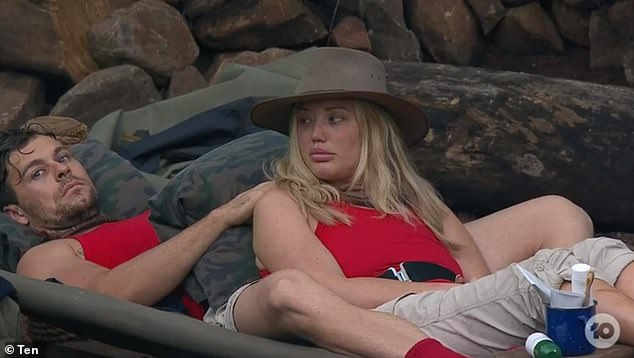 Moved on: Charlotte most recently starred on the Australian version of I’m A Celebrity… Get Me Out Of Here! where she enjoyed a brief romance with co-star Ryan Gallagher

Everything you need to know about coronavirus

By Natalie Rahhal, Acting US Health Editor for DailyMail.com

HOW DANGEROUS IS CORONAVIRUS?

About 14 percent of people who contract the Covid-19 coronavirus are taken to hospital – with severe symptoms including breathing problems and pneumonia. About 5 per cent need intensive care.

But the majority who get the virus suffer nothing more than a cough and may never know they are infected.

So far, some 51,000 people around the world have already recovered from coronavirus – and that just includes the numbers who received a diagnosis.

HOW MANY PEOPLE DIE?

Officially, the death rate so far has been just over three percent. But experts believe the true mortality rate is probably between one and two percent. This is because most mild cases have not been picked up by doctors or reflected in the official numbers – so the death rate is inflated.

HOW DOES THIS COMPARE WITH OTHER DISEASES?

Seasonal flu kills roughly 0.1 percent of people. So Covid-19 is between 10 and 20 times more fatal.

But it is far less dangerous than SARS – the virus that ripped across China in 2003 – which killed 10 percent of patients.

Yes, but not dramatically. The best estimates suggest every person with Covid-19 passes it on to 2.6 people, on average. For flu that number is 1.5.

CAN IT BE SPREAD WITHOUT SYMPTOMS?

Initially scientists feared carriers who had no symptoms could pass it on. That is now in doubt.

What is likely, however, is those who have mild symptoms are putting it down to a cold and going about their normal lives – which puts others at risk.

HOW LONG IS IT BEFORE SYMPTOMS APPEAR?

Again, unclear. Initially scientists said this could take up to two weeks.

But recent evidence suggests the incubation period could be as long as a month – particularly among children.

The average, however, is much shorter. A Chinese study said the average period of symptom onset was 5.4 days for adults and 6.5 for children.

WHO IS AT RISK?

The virus can affect anyone – with a study of the first 41 infected people revealing two thirds did not suffer from any pre-existing condition. But the middle-aged are most likely to get it – 78 percent of those infected in China have been aged 30 to 69.

WHAT ABOUT THE OLD?

WHO ELSE IS VULNERABLE?

Those with other conditions – such as diabetes, heart disease, high blood pressure and kidney problems – are likely to suffer severe complications if they become infected.

Children seem to be low-risk. Less than 1 percent of the Chinese cases have been under the age of ten – and if children do get the virus it’s often a mild form.

They do, however, retain the virus for longer than adults.

A study last week found the virus was still present in the stools of some children for a month after they contracted it.

Men are marginally more likely to get the virus than women. It is not clear why this is.

HOW DO DOCTORS TEST FOR COVID-19?

Anyone who has symptoms –particularly if they have travelled to an at-risk area – are told to call ahead to their health care provider, local emergency department or clinics.

This way, health care providers can be prepared, wearing masks, gloves and other personal protective equipment when they meet the possible patient and escort them to isolated areas of the facility.

They are tested using a cheek swab which is sent off for analysis at one of 12 Public Health England labs, a process that takes between 24 and 48 hours. Any positive test is double-checked at the main PHE lab in Colindale.

WHAT TREATMENT DO PATIENTS GET?

There is little doctors can do to tackle the virus, but they can treat the symptoms – such as fever and respiratory problems. Antivirals and antibiotics are also used, mainly to keep secondary problems at bay.

In the most serious cases patients are put on life-support equipment.

There are several clinical trials for potential coronavirus treatments ongoing worldwide, including one in Nebraska, where at least 13 patients are in quarantine, including two in biocontainment units.

WHAT ABOUT A VACCINE?

Even though the Wuhan virus appeared only a few weeks ago, 20 teams around the world are already manufacturing vaccines.

Chinese authorities provided the DNA code for the virus early on in the outbreak, enabling scientists to get to work straight away.

At least 30 companies and research institutions in the US are racing to make a vaccine.

Last week, one of these companies, Moderna, shipped its candidate vaccine to the US, signalling the shot was ready to begin clinical trials.

Even so, US health authorities say it will likely be upwards of a year before a vaccine is actually ready.

What are the symptoms of the coronavirus?

Like other coronaviruses, including those that cause the common cold and that triggered SARS, COVID-19 is a respiratory illness.

Although having a runny nose doesn’t rule out coronavirus, it doesn’t thus far appear to be a primary symptom.

Most people only become mildly ill, but the infection can turn serious and even deadly, especially for those who are older or have underlying health conditions.

In these cases, patients develop pneumonia, which can cause:

Avoid people with these symtpoms. If you develop them, call your health care provider before going to the hospital or doctor, so they and you can prepare to minimize possivle exposure if they suspect you have coronavirus.

As the coronavirus outbreak continues to spread, people who have been exposed to the virus or to sick patients have been asked to go into self-isolation.

But what exactly does that mean?

A former chief medical officer for the Centers for Disease Control and Prevention explains to DailyMail.com what self-isolation is and what you should be doing while cooped up at home.

IS SELF-ISOLATION THE SAME AS BEING IN QUARANTINE?

In a word: no. Those who undergo self-isolation do so voluntarily and have to make arrangements themselves while they’re at home.

While quarantines are typically voluntary, sometimes they can be mandatory, such as the federal quarantine for US citizens evacuated from Wuhan, the epicenter of the outbreak.

People under quarantine are not sick, but they are are separated fro the general public to see if they become sick.

Both self-isolation and quarantine differ from isolation, which separates those who are sick from the general public until they are cured or treated.

WHO NEEDS TO SELF-ISOLATE?

‘People who should go into self-isolation are not sick but they’ve had a credible exposure,’ said Dr Robert Amler, former chief medical officer for the CDC and dean of New York Medical College.

‘There’s reason to believe they may have been exposed. And we wait for the incubation period, in this case about 14 days, to see if they become sick.’

This includes a few groups of people such as anyone awaiting CDC test results or anyone who has been in contact with someone waiting for test results.

Anyone who has traveled to a foreign country where the outbreak is rampant such as China, Japan, South Korea, Italy and Iran.

WHAT DO I DO IN SELF-ISOLATION?

People under self-isolation are expected to stay home and not go to work or school, or take their children to school.

Dr Amler says that people should try to do as much of their normal activities as they can – such as working from home or doing school work – without physically contacting anyone else.

‘That means staying in your room, trying to have your own bathroom facility if possible, and not sharing plates or utensils with other household members,’ he said.

However, being in self-isolation doesn’t mean that you can’t have contact with the outside world.

‘You can use your TV, your stereo, your phone, FaceTime, go on social media,’ Dr Amler said.

‘Just anything that does not allow you to get [possibly infected] droplets everywhere else.’

CAN I GO OUTSIDE TO GET FOOD, TOILETRIES OR OTHER SUPPLIES?

People under self-isolation are not allowed to leave the premises under any circumstances.

One option is to have family or friends drop off supplies you need. Alternatively, you can use grocers or online retailers to deliver packages.

Dr Amler offers two suggestions, either wear a mask when the person drops off items or wait until they leave before retrieving them.

He says the latter is more ideal because ‘because the person delivering items not enter the air space.’

WHAT DO I DO WITH MY GARBAGE?

Dr Amler says that most people don’t produce huge amounts of garbage by themselves so, if you can wait to take it out, that’s the best option.

‘If there’s no harm in keeping it, that’s the most protective way,’ he said. ‘That way nothing going out your room.’

If that’s not possible, Dr Amler recommends depositing outside of your doorstep until the 14-day isolation period is up.

WHAT HAPPENS IF I FEEL UNWELL WHILE IN SELF-ISOLATION?

The most important thing is to not visit a doctor’s office, a hospital or any other healthcare setting, otherwise you risk infecting others.

Stay home and immediately call your healthcare provider and ask them for advice on what you should do.

‘Alert the authorities so you can be transferred to a hospital to be monitored, and undergo testing,’ Dr Amler said.