Christian Cooper has been birding since he was 10. His lifelong fascination with birds endured through his time at Harvard and into his years as an editor for Marvel Comics. He has fed his passion with birding trips to Central Park and around the world, but has been keenly aware that few other African-American men appear to be invested in the hobby. ⁣ ⁣ “We should be out here,” Cooper said. “The birds belong to all of us. The birds don’t care what color you are.”⁣ ⁣ On Tuesday, a video went viral, showing a white woman calling the police on Cooper after he asked her to leash her dog in an area of Central Park where it is required. The video, filmed by Cooper, shows the woman falsely claiming “an African-American man is threatening my life.” The video set off a painful discourse about the history of dangerous false accusations against black people made to the police. By the end of Tuesday, the woman, Amy Cooper, had surrendered her dog and was fired from her high-level finance job. ⁣ ⁣ “Any of us can make — not necessarily a racist mistake, but a mistake,” Christian Cooper said. “And to get that kind of tidal wave in such a compressed period of time, it’s got to hurt. It’s got to hurt. I’m not excusing the racism, but I don’t know if her life needed to be torn apart.”⁣ ⁣ To read the full story, tap the link in our bio. Photo by @bnewmanphoto.⁣

For whatever record, I am 100% here for turning Christian Cooper into a legitimate celebrity. He’s more compelling and interesting than 99% of the people in the entertainment industry. Christian Cooper is the African-American bird-watcher who was threatened by “Central Park Karen” Amy Cooper several days ago. He told her to leash her dog. She called the cops and claimed that she was being threatened by an African-American man. She ended up losing her dog and her job and she’s currently been investigated by the police and the city’s human rights department. In the wake of the Central Park Karen incident, people have been sharing video clips of Christian Cooper talking about birds and bird-watching in the city. He’s a beautiful, buff Harvard-educated bird nerd and I love him. And I loved him even more after reading this New York Times interview with him – he took the Times reporter bird-watching in the park yesterday. Some highlights:

He knows that we all make mistakes: “Any of us can make — not necessarily a racist mistake, but a mistake. And to get that kind of tidal wave in such a compressed period of time, it’s got to hurt. It’s got to hurt. I’m not excusing the racism. But I don’t know if her life needed to be torn apart.” He opened his mouth to speak further and then stopped himself. He had been about to say the phrase, “that poor woman,” he later acknowledged, but he could not bring himself to complete the thought.

He has no doubt that her intent was racial: “She went racial. There are certain dark societal impulses that she, as a white woman facing in a conflict with a black man, that she thought she could marshal to her advantage. I don’t know if it was a conscious thing or not. But she did it, and she went there.”

His love of birding: Mr. Cooper’s love of birding began at age 10, he said, when his parents, two Long Island schoolteachers, enrolled him in a 4-H program. There, in a woodworking class, he crafted a bird feeder that he set in his lawn. The creatures that flocked to it set off a fascination that has endured for four decades, through his time at Harvard, where he graduated with a degree in political science, and into his years as an editor for Marvel Comics, where he is credited with creating one of the first gay characters in the Star Trek comic universe.

How do we make progress: “If we are going to make progress, we’ve got to address these things, and if this painful process is going to help us address this — there’s the yellow warbler! If this painful process — oh, a Baltimore oriole just flew across!— helps to correct, or takes us a step further toward addressing the underlying racial, horrible assumptions that we African-Americans have to deal with, and have dealt with for centuries, that this woman tapped into, then it’s worth it. Sadly, it has to come at her expense.”

He read Amy Cooper’s apology: He called it “a start.” He said he was not interested in meeting her or in any face-to-face reconciliation.

He knows there aren’t many black bird-watchers, but: “We should be out here. The birds belong to all of us. The birds don’t care what color you are.”

[From The NY Times]

Again, I am completely here for more profiles of and interviews with Christian Cooper. Get him to do a weekly bird-watchers column in the Times. Give him a talk show on PBS. Give him a bird-watching and race-relations Netflix documentary. Anyway, yeah – he didn’t have to show any sympathy for Amy Cooper but he did, which is more than she’s shown him all week. If he had not gotten her on video, Amy Cooper’s version of what went down would have been very different, I have no doubt. And he knows that too. 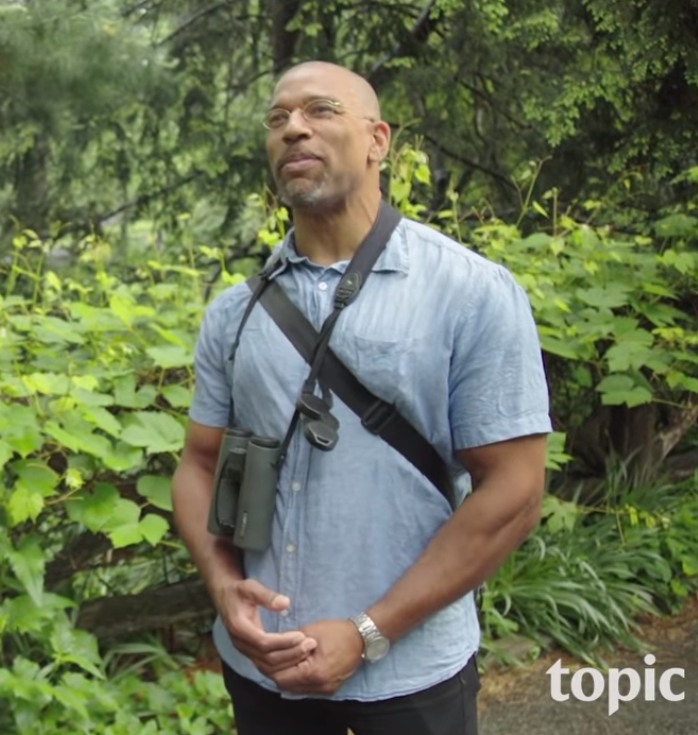 Photos courtesy of Instagram/NYT and screencaps from Topic video.