CLAUDIA CONNELL reviews last night’s TV: An army of men to build a den? No, just one amazing mum and her pal

Scandalous! The Tabloid that Changed America

The enduring appeal of George Clarke’s Amazing Spaces (C4) is that he talks about buildings in a no-nonsense, blokey way.

So when, last night, the architect mentioned that a project wouldn’t just transform a space but ‘lives as well’, alarm bells sounded.

Uh oh, had Amazing Spaces gone all DIY SOS? Would armies of men in matching polo shirts swarm in and toil while kindly neighbours made them tea? Thankfully, no. 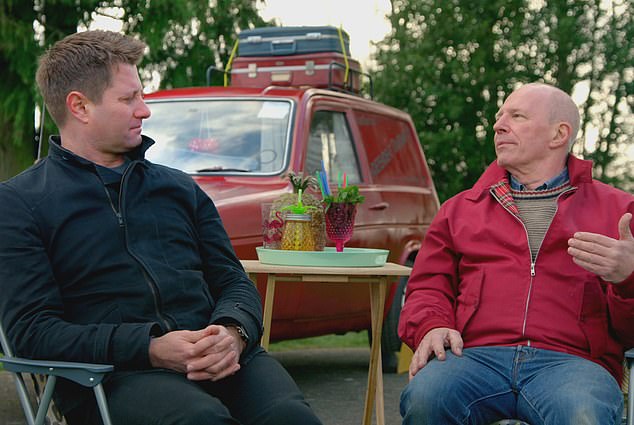 The appeal of George Clarke’s Amazing Spaces (pictured during episode one) is that he talks about buildings in a no-nonsense, blokey way. So when he said a project wouldn’t just transform a space but ‘lives as well’, alarm bells sounded

Instead, George was talking about Marianne and Bill, who wanted to turn their dilapidated garage into a space for the family to relax.

Youngest daughter Tilly suffered from a ‘sensory processing’ disorder that meant her brain had trouble with sights and noises around her, causing her to have what her family called ‘daily meltdowns’. These were taking their toll on older sister Bea.

By the end of the project, Marianne and a friend had created an impressive den for Bea with a special adjoining ‘sensory room’ for Tilly. What’s more, they’d done it by following online video tutorials.

Elsewhere, life on a houseboat with no electricity and water was proving a test for young couple Gaby and Callum. Unable to afford London house prices, they bought a boat for £48,000 in desperate need of some TLC.

Their £20,000 budget may have been blown out of the water but, after six months, they ended up with a floating high-end apartment.

It was certainly far easier on the eye than the curious property craftsman Will Hardie visited in Pembrokeshire.

A glass bubble built into the hillside, it looked like a cross between the Teletubbies’ house and a Bond villain’s lair.

Whether mucking in with a mallet or having an ‘architectural epiphany’ in a Chilean temple, George has become the everyman of architecture, and it’s wonderful to watch a programme that feels informative without being haughty.

No one could accuse The National Enquirer of being haughty. At the height of its success, the American scandal sheet was reaching 25 million people a week.

In Scandalous! The Tabloid That Changed America (BBC4) we were told fledgling media mogul Generoso Pope bought what was The New York Enquirer in 1952 and set about rebranding it. His imagined reader was someone he called ‘Missy Smith’ from Kansas. 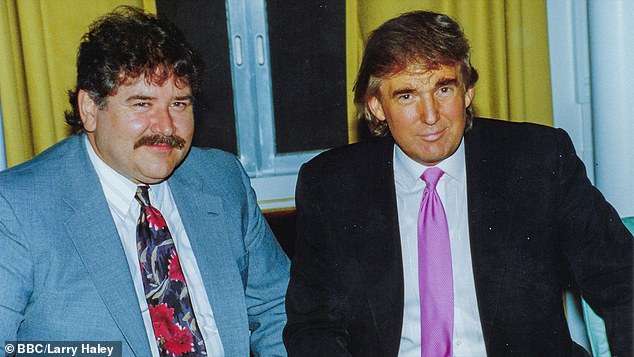 In Scandalous! The Tabloid That Changed America (BBC4) we were told fledgling media mogul Generoso Pope bought what was The New York Enquirer in 1952 and set about rebranding it. Pictured, former National Enquirer editor Larry Haley with Donald Trump

Missy, he decided, needed to know that celebrities had the same problems that she did. Missy was reassured that Elizabeth Taylor struggled with her weight and that the Charlie’s Angels all supposedly hated one another.

He also hit on the genius idea of selling the magazine in supermarkets so that Missy and her friends could pick it up with their groceries.

Bribing a family member to take a snap of Elvis Presley in his coffin led to one of the biggest-selling issues.

In the 1990s, the Enquirer ran endless stories on Donald Trump who, back then, was nothing more than a loud property developer with a colourful love life.

The source of the stories, according to former staff members, was mostly The Donald himself.

Not just a gossip rag, it thrashed rivals on the O.J. Simpson story. He claimed never to have owned the type of shoe that had left a bloody footprint by the body of his murdered ex-wife Nicole. The Enquirer uncovered a picture that proved otherwise.

Today, Missy has moved on and The Enquirer limps along, a shadow of its former self.

But being reminded of its heyday made for enthralling and titillating viewing.