EXCLUSIVE: Daisy Lowe’s third lockdown boyfriend is named as Jordan Saul as he shares video of them feeding deer on romantic stroll days after that PDA in the park

Daisy Lowe’s mystery man has been revealed as animal-obsessed, adventure-loving Jordan Saul, following their PDA-fest in a north London park on Saturday.

Jordan, whose Instagram handle is @jordanjaysaul, is the third male suitor model Daisy has been linked to since the beginning of lockdown.

The hunk proved things are going well between them by sharing a video of them feeding deer on a zoo date on Instagram on Tuesday. 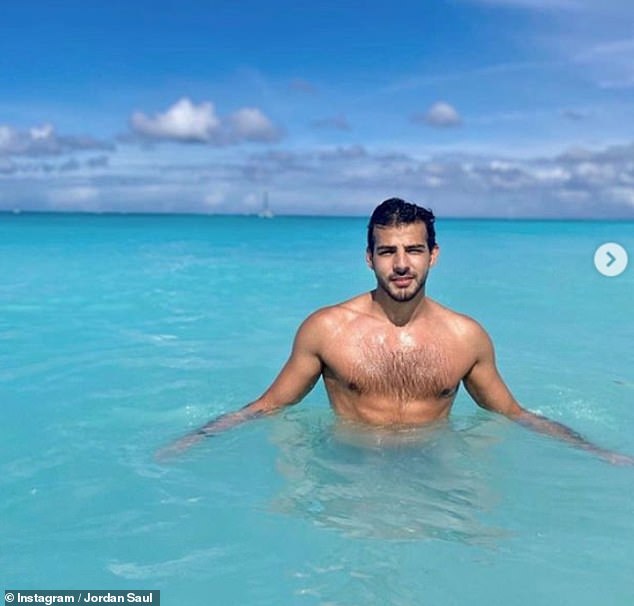 There he is! Daisy Lowe’s mystery man has been revealed as Jordan Saul, an avid traveller who documents his adventures on social media (pictured in snap posted in December 2019) 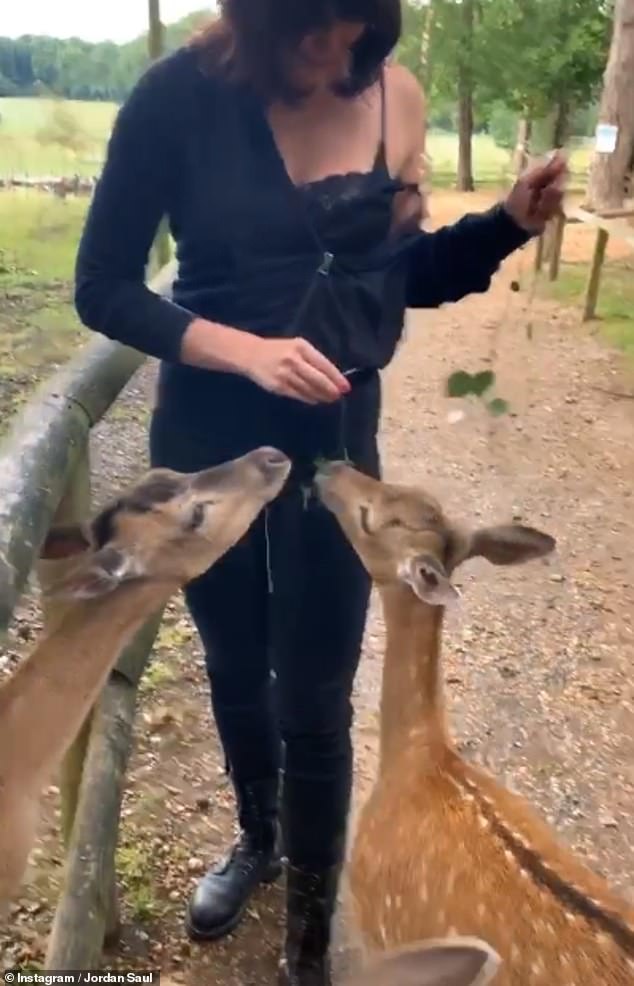 She looks familiar? On Tuesday Jordan shared a video of his recent trip to the zoo with Daisy on Tuesday, where the model can be seen feeding some deer as their romance continues

While he doesn’t mention his occupation on social media, he’s clearly at home with the animal kingdom, sharing pictures of himself cuddling a cheetah and snorkelling in the ocean.

He and Daisy appear to have bonded over their love of animals and in the video she can be heard whispering about how long the deer’s eyelashes are. 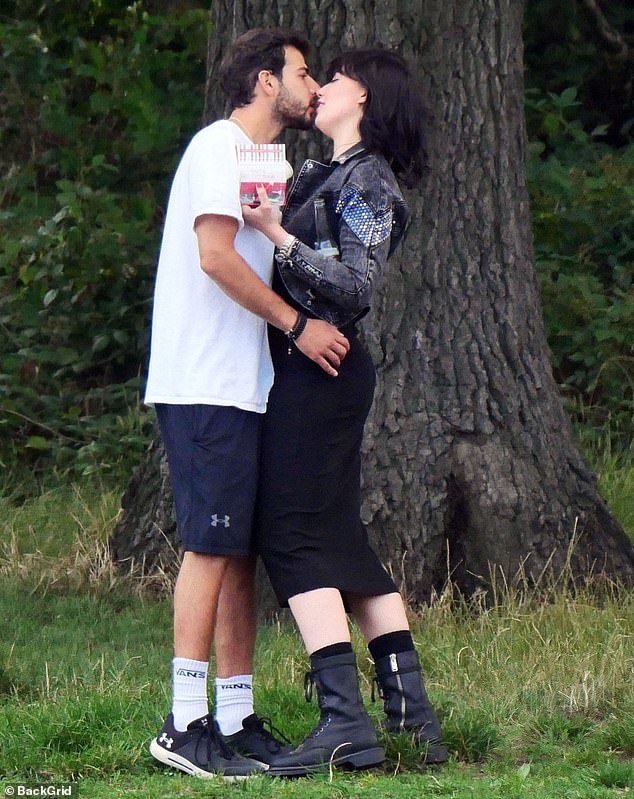 Cheeky: The pair were spotted sharing a cheeky smooch during a trip to a north London park on Saturday, the third male companion Daisy has been spotted with during lockdown

The fashion star sported one of her signature all-black looks as she fed some deer during the romantic date.

Later the pair were spotted enjoying a cheeky smooch as they headed to a north London park, and she was clearly enamoured with the handsome chap.

On Friday, the day before Daisy’s love-fest in the park, her spokesperson told MailOnline that her relationship with musician Christian Langdon was platonic after she was spotted with a ring on her engagement finger.

On June 2, Daisy had stepped out with her arm around Christian, despite being under government-ordered lockdown for 10 weeks. 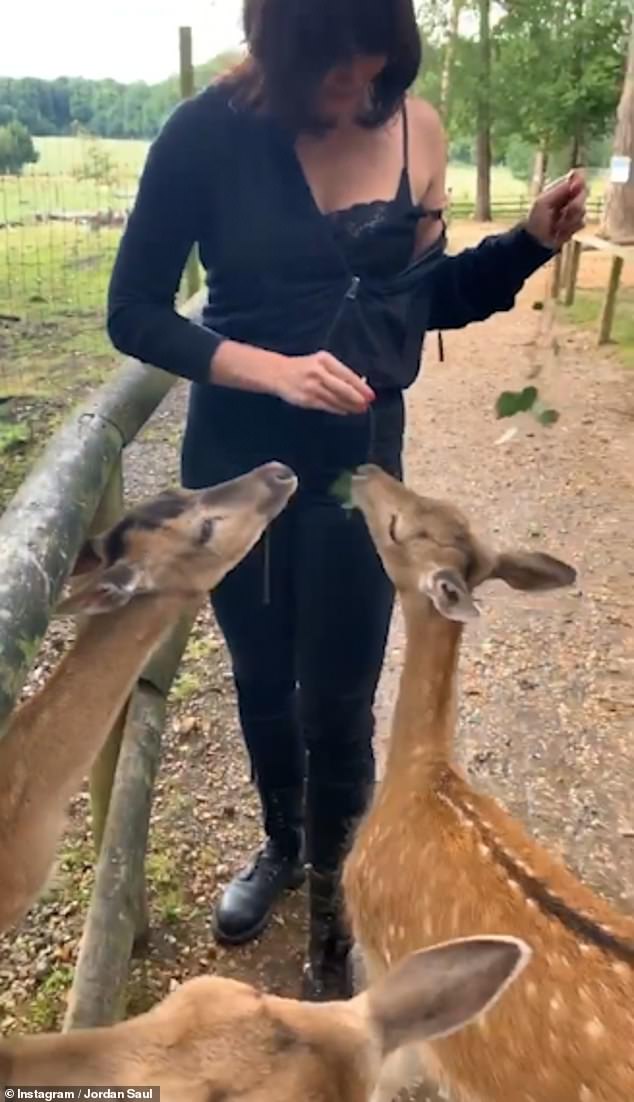 Gorgeous: The fashion star sported one of her signature all-black looks as she fed some of the deer in the picturesque park 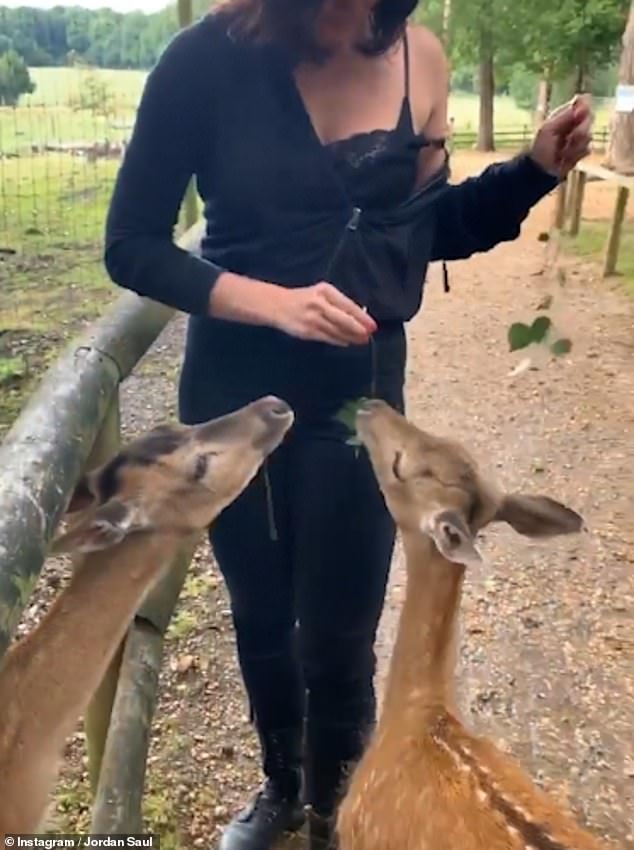 Exciting: Daisy seemed to be enjoying the date with her hunky new male suitor, after they were spotted together over the weekend 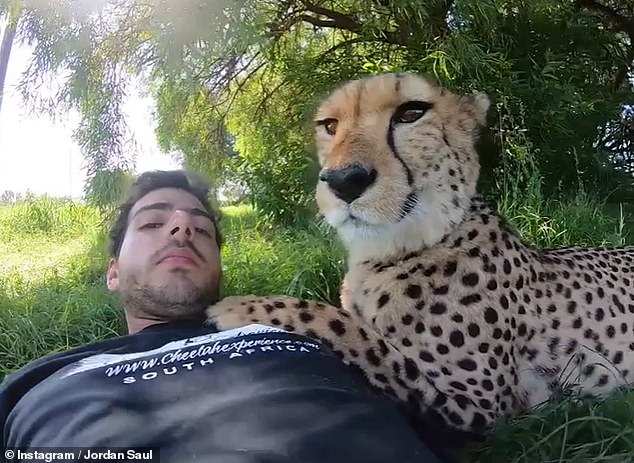 Daring: Clearly at home in the animal kingdom, social media snaps show Jordan relaxing with a cheetah, with many of his posts shared weeks before lockdown

The two had undoubtedly met thanks to their showbiz connections, with Christian’s brother Royston the lead singer of the rock band Spacehog.

Christian is also the ex-husband of Cat Pierce from The Pierces.  The rocker was a member of Arckid in the 1990s and early 2000s. He also goes by the nickname ‘Leggy Langdon’, thanks to his statuesque frame.

Daisy had split from musician Jack Peñate just a few weeks before. The beauty had found romance with Jack after splitting from Cameron McMeikan, 24. The model even supported Jack on his new album in November.

Daisy and Cameron dated for almost a year before reportedly ending their romance over their six-year age gap. Jack’s biggest hit to date is his 2007 song Torn on the Platform, and he has two top 20 albums. 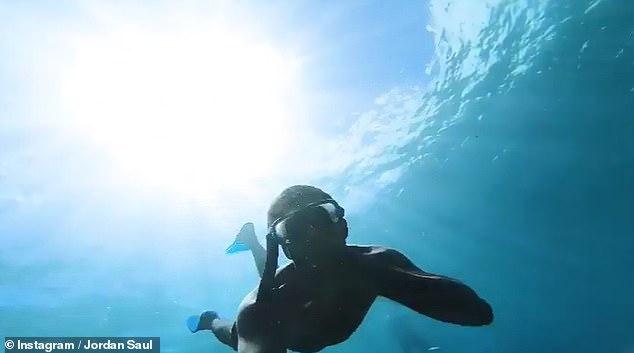 Fun: He openly documents his travels, which include snorkelling in the crystal clear ocean 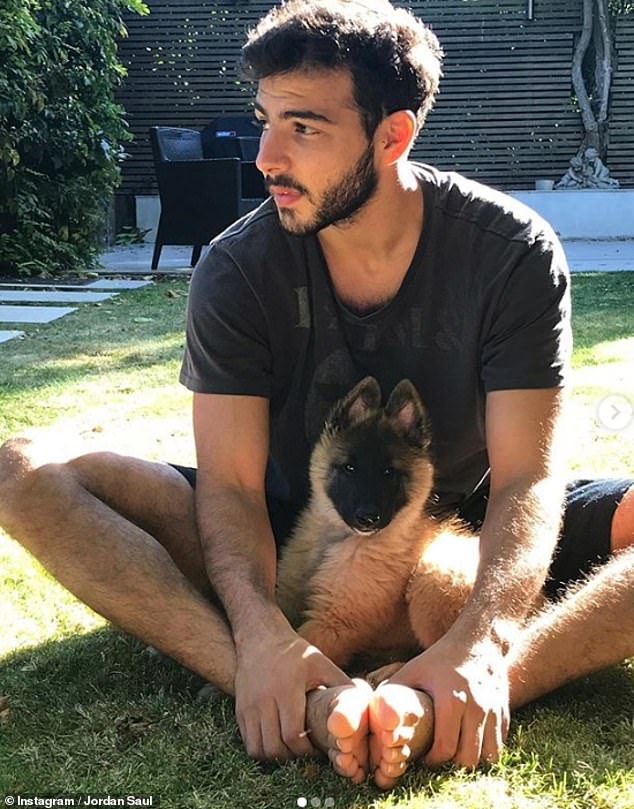 So cute! Jordan also shares plenty of snaps alongside his pet pooches, before being spotted smooching with Daisy 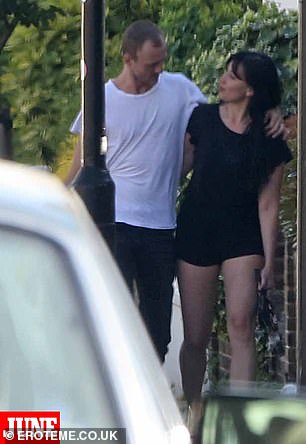 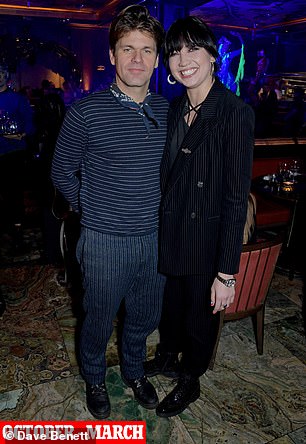 Doing what she likes: Daisy was linked to musician Christian Langdon

Daisy recently claimed she knew her relationship with one of her ex-boyfriends was over when he told her to lose weight.

Speaking to Mel B on Badoo’s The Truth Flirts podcast in October 2019, she said: ‘I hadn’t been very well, and I was on annoying medication that made me put on a lot of weight. 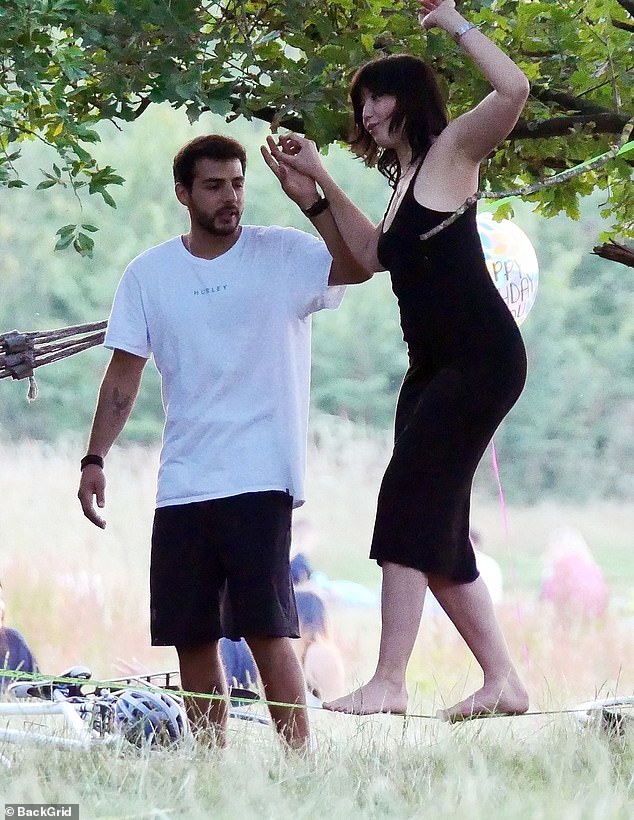 Flirty: Daisy certainly seemed to be enamoured with her new beau as they were spotted relaxing in a north London park over the weekend

She said: ‘We had been seeing each other for a while but I knew at this point that it was definitely over. He was in a bad mood or whatever, so I was like, “You’re in a really bad mood so I’m just going to leave you in here and go shower”.

‘I got in the shower and because obviously he didn’t like that I had said that to him he came into the shower.

‘Bearing in mind, I am starkers and showering, he pointed at me and said, “You’re so disgusting you need to lose weight so you can get work”. 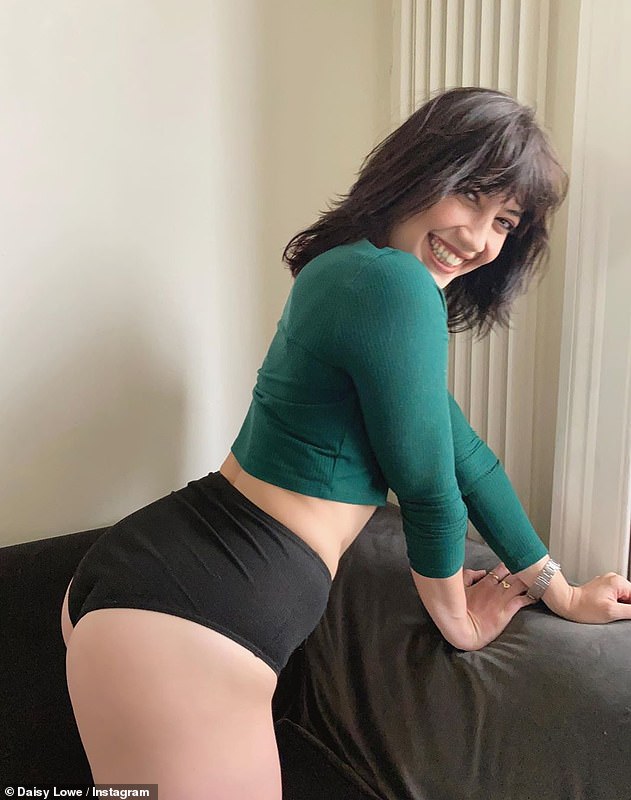 Confident: No stranger to flaunting her incredible physique, Daisy recently claimed she knew her relationship with one of her ex-boyfriends was over when he told her to lose weight