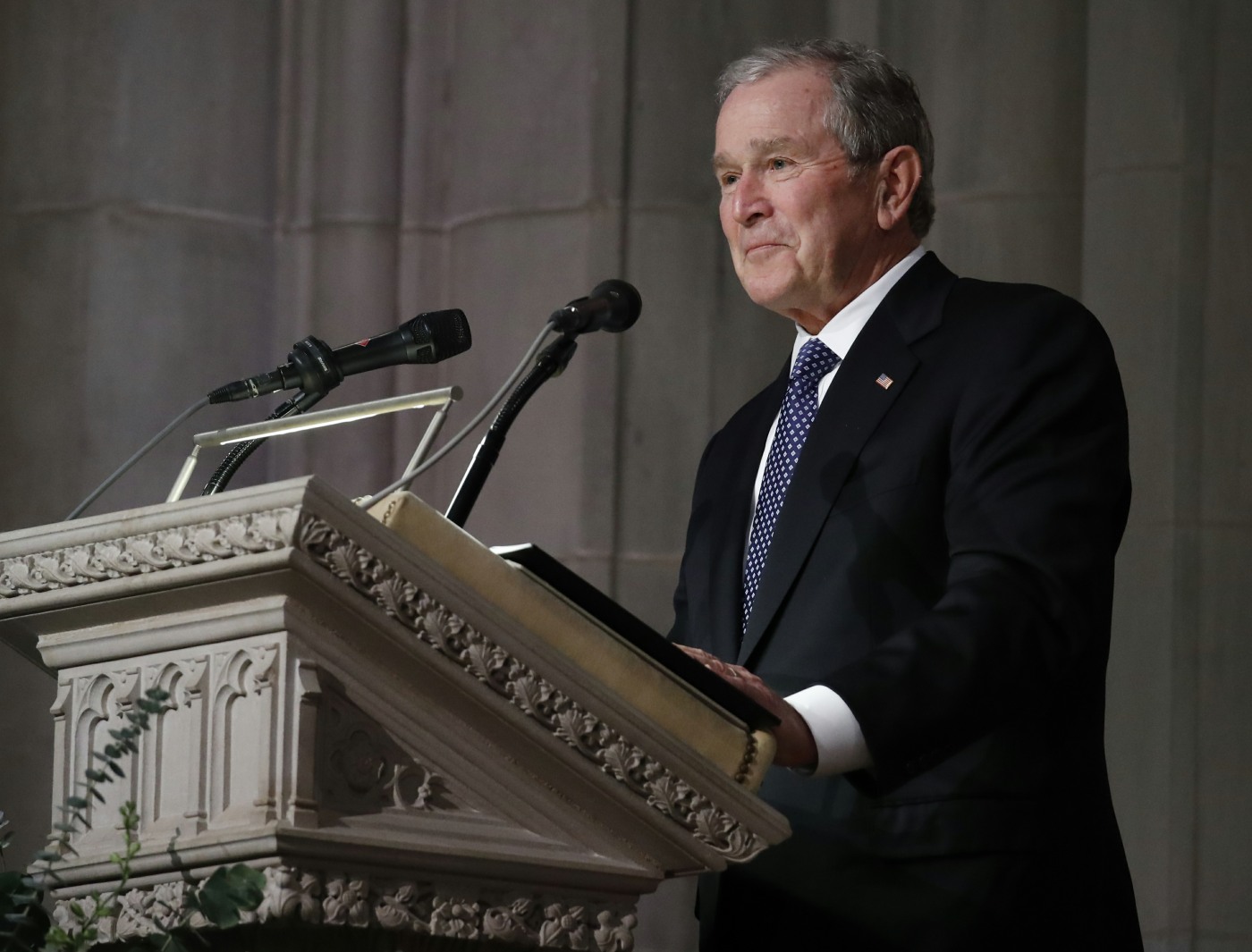 By now, I think everyone is uncomfortable with the way they feel about George W. Bush. As I’ve said before, I absolutely hated Bush when he was in office. I hated his presidency. So much of what we’re dealing with now in the Trump dictatorship is a direct result of the Bush presidency, and what Bush did to American politics and Republican politics. But if you put aside all of that (and yes, that’s an enormously privileged argument), Bush’s post-presidency has been fine. He lost both of his parents and grieved for them publicly, he’s maintained friendships with the Obamas and Clintons, he’s spoken out in humanitarian ways about race and the pandemic and more. Of course I still think the man was a terrible president. But f–k it, I didn’t hate his statement on the protests and the murder of George Floyd. I’m publishing it in full:

Laura and I are anguished by the brutal suffocation of George Floyd and disturbed by the injustice and fear that suffocate our country. Yet we have resisted the urge to speak out, because this is not the time for us to lecture. It is time for us to listen. It is time for America to examine our tragic failures — and as we do, we will also see some of our redeeming strengths.

It remains a shocking failure that many African Americans, especially young African American men, are harassed and threatened in their own country. It is a strength when protesters, protected by responsible law enforcement, march for a better future. This tragedy — in a long series of similar tragedies — raises a long overdue question: How do we end systemic racism in our society? The only way to see ourselves in a true light is to listen to the voices of so many who are hurting and grieving. Those who set out to silence those voices do not understand the meaning of America — or how it becomes a better place.

America’s greatest challenge has long been to unite people of very different backgrounds into a single nation of justice and opportunity. The doctrine and habits of racial superiority, which once nearly split our country, still threaten our Union. The answers to American problems are found by living up to American ideals — to the fundamental truth that all human beings are created equal and endowed by God with certain rights. We have often underestimated how radical that quest really is, and how our cherished principles challenge systems of intended or assumed injustice. The heroes of America — from Frederick Douglass, to Harriet Tubman, to Abraham Lincoln, to Martin Luther King, Jr. — are heroes of unity. Their calling has never been for the fainthearted. They often revealed the nation’s disturbing bigotry and exploitation — stains on our character sometimes difficult for the American majority to examine. We can only see the reality of America’s need by seeing it through the eyes of the threatened, oppressed, and disenfranchised.

That is exactly where we now stand. Many doubt the justice of our country, and with good reason. Black people see the repeated violation of their rights without an urgent and adequate response from American institutions. We know that lasting justice will only come by peaceful means. Looting is not liberation, and destruction is not progress. But we also know that lasting peace in our communities requires truly equal justice. The rule of law ultimately depends on the fairness and legitimacy of the legal system. And achieving justice for all is the duty of all.

This will require a consistent, courageous, and creative effort. We serve our neighbors best when we try to understand their experience. We love our neighbors as ourselves when we treat them as equals, in both protection and compassion. There is a better way — the way of empathy, and shared commitment, and bold action, and a peace rooted in justice. I am confident that together, Americans will choose the better way.

How is it that Bush has better speechwriters as an ex-president than he did as a president?? The tone of this was so good – “this is not the time for us to lecture. It is time for us to listen,” and “Those who set out to silence those voices do not understand the meaning of America” and “They often revealed the nation’s disturbing bigotry and exploitation — stains on our character sometimes difficult for the American majority to examine.” I’m sure a lot of people will catch on this line: “Looting is not liberation, and destruction is not progress.” Yeah, he could have avoided that, but A) black leaders have been saying the same thing and B) Bush made a full-throated defense of protesters throughout the statement. If he was still president and he made this speech, Democrats would praise his leadership.

Of course Bigly got his panties in a twist.