It’s not clear what point Giuliani was trying to make, since COVID-19 is contagious and cancer is not 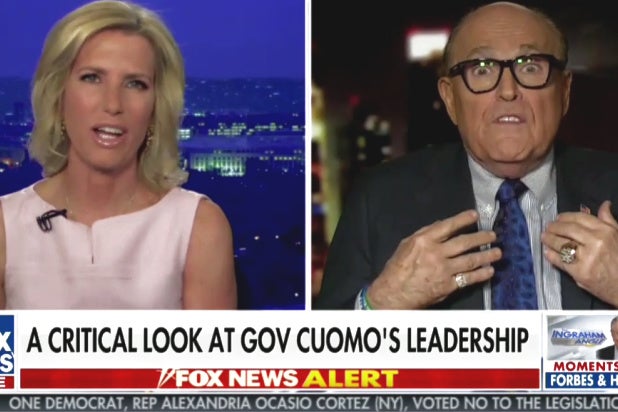 Guiliani took himself on a bit of a segue during the segment as he ranted about how nobody should “try to blame Donald Trump for the coronavirus. Blame China.” On the tail end of that miniature screed he claimed that China “sent 1.5 million people out of Wuhan to come and infect us.”

And that’s when host Laura Ingraham chimed in.

“That’s all right, Rudy. Michael Bloomberg is going to handle the tracing — army of tracers — in New York, we learned today,” she said, referring to the announcement earlier in the week that Bloomberg Philanthropies would be teaming up with the state of the New York and health organizations to “develop a contact tracing program.”

But then Rudy just took that prompt as an excuse to say another strange thing.

“That’s totally ridiculous. Then we should trace everybody for cancer. We should trace everybody for cancer, and heart disease and obesity,” Giuliani said, as Ingraham repeatedly attempted and failed to talk over him. “A lot of things kill you more than COVID-19. So we should be traced for all those things. And life possesses a certain degree of risk, and we have to be willing to live with it.”

You can watch the clip below.

Giuliani appears to have no idea what contact tracing even is, but for those of you who actually want to know things: contact tracing is the process of identifying who has come into contact with someone who is infected with a communicable disease.

This information is used to locate other potential infectees for treatment and isolation. It’s a vital part of identifying how viral illnesses spread and preventing outbreaks from becoming worse.

Suffice to say that heart disease, cancer and obesity are not conditions that can be spread by casual contact with other people. Contact tracing is something that can only be done with contagious illnesses.