As the aftermath of the first season of Netflix’s Dating Around shows, its rare that this show can generate a perfect couple; in general, it’s probably safe to say that a first date doesn’t have a super high success rate. But at the end of the fourth episode of Netflix’s show’s second season, it really did feel like Heather and Ernesto (her chosen suitor for a second date) had found something special. But as nice as it was to see him approach her on Bourbon Street with a brass band in tow, we’re still left wondering—are these two still together?

The second season of Dating Around is, essentially, the same thing as the first: six episodes, none topping 30 minutes, of seemingly unfiltered modern first dates—except rather than being set in New York, the new season finds its subjects dating in New Orleans.

The joy of the show, though, is that each episode is different—the main character and their suitors vary from episode to episode. Through the show’s unique presentation (there are no talking heads, and the various dates are all filmed at the same locations and cut together afterwards), it’s always a supremely interesting exercise in people watching to see how different people reveal their personalities with time.

And as Heather’s episode unraveled, it became increasingly clear that sparks were flying between these two. While most of her other suitors also seemed perfectly fine (it was clearly not working with one guy, Truman; the date was DOA as soon as he said he loved hunting and she said she loved animals), the chemistry between Ernesto and Heather was constantly present and improving.

At the end of the episode, we see Ernesto approach Heather as she waited on a New Orleans street corner with a brass band in tow. We know this couple had a second date—but what about a third, fourth, or dare we say it, fifth? It’s hard to say for sure, but the signs that are generally out there are pointing toward yes.

Heather and Ernesto are both very active on Instagram, and long before anyone watched Dating Around and knew who they were, Heather commented on a few of Ernesto’s posts.

Happy Mother’s Day to my mom the person who has sacrificed it all for love of her family. She is my biggest supporter, critic, mentor and voice of influence. As I grow older, I continuously learn that Mamá’s always right ?. Te amo con todo mi corazón ❤️ #spreadlove #mommasboy

Here, she appreciates Ernesto’s kind words for his mom on Mother’s Day. “The CUTESTTTT DUO🦋” she wrote.

I miss adventuring. Hopeful that one day soon we will all be able to travel and enjoy this beautiful world again. #travel #adventure #nolatravel #neworleans #camping #glamping #winnebago ?: @hsalvaggio

We knew Ernesto was a travel junkie from his conversations in the episode, and in his post here he reflects on his inability to do that in COVID-19 times. Heather appears in the comments section to comfort him: “Winnebago Boiz a cutieee🔥 also sameeee🙌,” she wrote.

Both of them have been clearly excited about their time on the show:

Surprise! I took a leap and decided to participate in Season 2 of ‘Dating Around’ on Netflix. I truly am happy and grateful for the opportunity to experience doing something like this. I was very hesitant to participate as reality TV isn’t really my thing. But I am so so happy I did this. It is a genuine, organic showcase of myself and I could not have asked for a better depiction of me. Yes I have funny moments and cheesy lines ? but I meant everything I said and I was just being me. Thank you for the outpouring of love ❤️ #datingaroundnetflix #datingaroundseason2 #netflix #spreadlove

“What a bunch of peaches you all are ! More to come kind hearts. Stay tuned 🦋🦋🦋🦋! #alltoberevealedfriday,” she wrote.

?just a smerlin merlin in peach? Also, YOU GUYS! Thank you all so SOO much for all the kindness and sweet messages !the amount of flattered could never be properly expressed ! What a bunch of peaches you all are ! More to come kind hearts. Stay tuned ????! #alltoberevealedfriday

Since the episode has aired, Ernesto has also been active on his Instagram, promoting the show while also keeping his personal life a little bit close to the vest. In one recent comment, a fan asked if he and Heather were still together, but he wasn’t in any hurry to divulge that information. Maybe he’s also waiting for Friday. 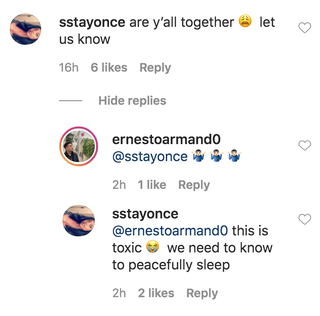 So it’s hard to say whether or not they’re still together or not—but a reveal is probably on the way soon. While we await official word, it’s clear that people were all aboard the pairing of Heather, who has dreams of taking her make-up skills to movie sets and once had a pet duck, and Ernesto, who gets excited about charity work and is the chair of the Hispanic Chamber of Commerce Young Professionals for New Orleans.

okay so i’m watching Dating Around and i just finished Heather’s episode… CAN I JUST SAY HOW MUCH I LOVE THE MAN SHE PICKED LIKE HES HANDSOME, DOES CHARITY WORK, AND BROUGHT A JAZZ BAND TO THE SECOND DATE?! we stan

I got emotional. Heather better chose him #DatingAround

Heather and Ernesto have to get married. I don’t make the rules. #DatingAround

Ernesto is so gorgeous, if Heather doesn’t date him… I will 👀 #DatingAround