‘We’ve been classed as essential workers’: Holly Willoughby and Phillip Schofield explain why they’ll continue to host This Morning live from the studio amid UK’s COVID-19 lockdown

Holly Willoughby and Phillip Schofield revealed why they’ll continue to host This Morning live from the studio amid the coronavirus pandemic.

During Tuesday’s instalment, the hosts insisted they’re still required to come into work as the government have classed them as ‘essential workers’, after UK Prime Minister Boris Johnson plunged the nation into a lockdown.

In a bid to cheer the nation during the global crisis, presenters Holly, 39, and Phil, 57, took a trip down memory lane by looking back at their best bits on the show, leaving the duo in fits of giggles. 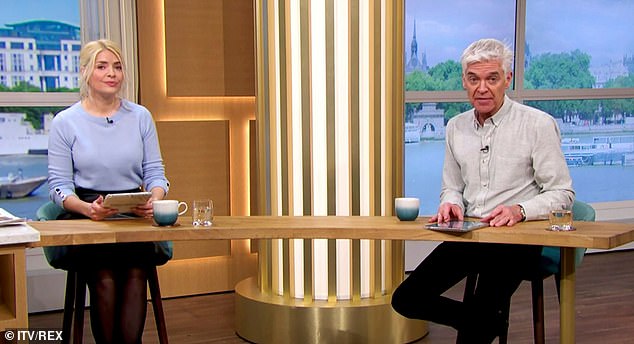 The show must go on: Holly Willoughby and Phillip Schofield revealed why they’ll continue to host This Morning live from the studio during Tuesday’s edition amid the coronavirus crisis

Addressing their viewers following Boris’ speech on Monday, media personality Phil said: ‘Lets start off by explaining probably for the first time ever, why we are here today.’

His co-star – who practised social distancing by sitting a few feet away from him – added: ‘The government has classed us as essential workers for the time being, as we are here to answer your questions and inform you on what is happening.’

Phil highlighted that their studio crew has been scaled back, adding: ‘We are running with a skeleton staff and for now on, with lots of people working from home.

‘In fact, the mobile crew have brought the cameras through from GMB through a hole in the wall. There are millions of others quite rightly staying at home.’ 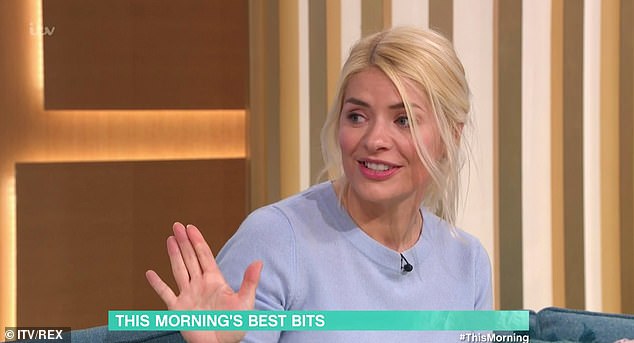 Business as usual: The hosts are required to come into work as the government have classed them as ‘essential workers’, after the Prime Minister plunged the nation into a lockdown 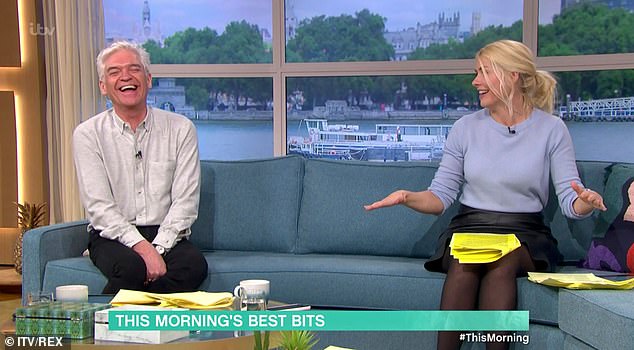 In good spirits: In a bid to cheer the nation during the global crisis, presenters Holly, 39, and Phil, 57, took a trip down memory lane by looking back at their best bits on the show 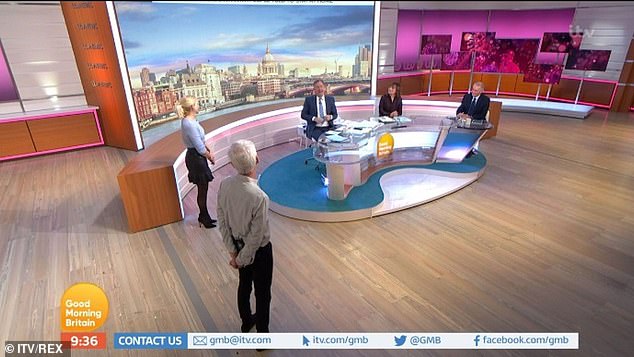 Compliance: The TV stars practised social distancing by sitting a few feet away from each other (pictured with Piers Morgan, Lorraine Kelly and Dr Hilary Jones)

On Monday night, the head of the government ordered the immediate closure of all non-essential shops and threatened people with fines or even arrest if they do not ‘stay at home’.

The shutdown will last for a minimum of three weeks and the UK’s new state of emergency is unprecedented in modern history.

Gatherings of more than two people will be banned in the most dramatic curbs on freedom ever seen in Britain in time of peace or war, as the government goes all out to stop the spread of the killer disease, which has claimed 335 lives.

Following the news, Holly and Phil attempted to bring some light relief to their viewers as they reminisced on their best bits from their 11-year joint stint on programme. 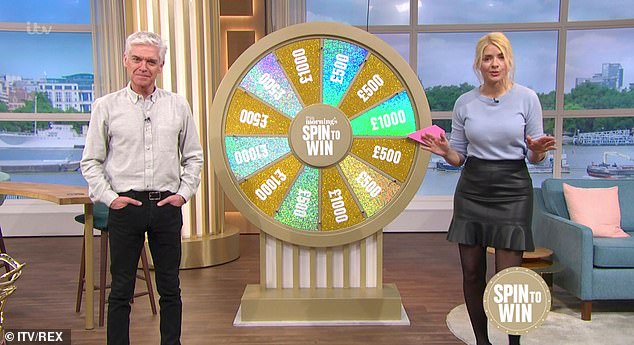 ‘We are running with a skeleton staff and for now on’: Phil highlighted that their studio crew has been scaled back

The throwback clips featured when the pair were forced to deliver their own cooking segment in chef Gino D’Acampo’s absence, as well as Phil joking Holly that would ‘pee her pants’ from laughter.

Reflecting on their hilarious moments, the blonde admitted: ‘One day [I’ll wee myself] and it’ll be the end of my career!’

‘If you’ve never seen our show, welcome to our world’, Phil quipped, before the TV veterans cackled over Holly’s laughing track – which was originally created when the star belted out a kooky chuckle in a previous edition of the show.

On Monday, the Dancing On Ice hosts adhered to social distancing rules for the first time on the show, with Holly admitting she couldn’t wait to hug her close friend again. 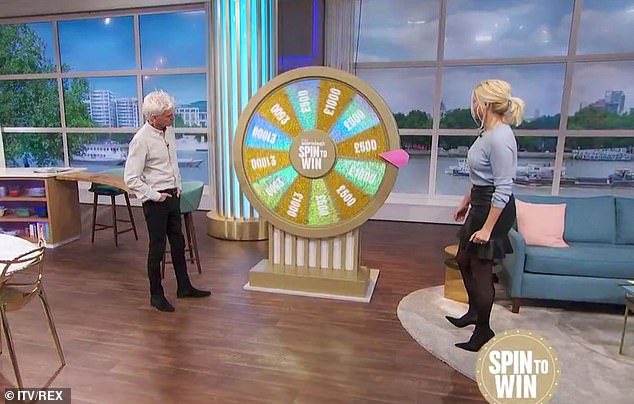 Cheerful: Following the news, Holly and Phil attempted to bring some light relief as they reminisced on their best bits from the programme, before playing Spin to Win with viewers 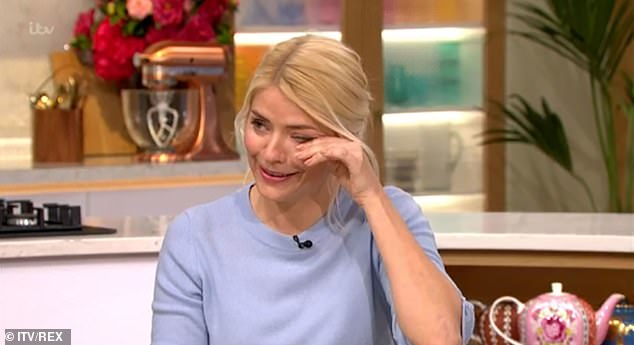 Overwhelmed with giggles: Reflecting on their hilarious moments, the blonde admitted: ‘One day [I’ll wee myself] and it’ll be the end of my career!’ 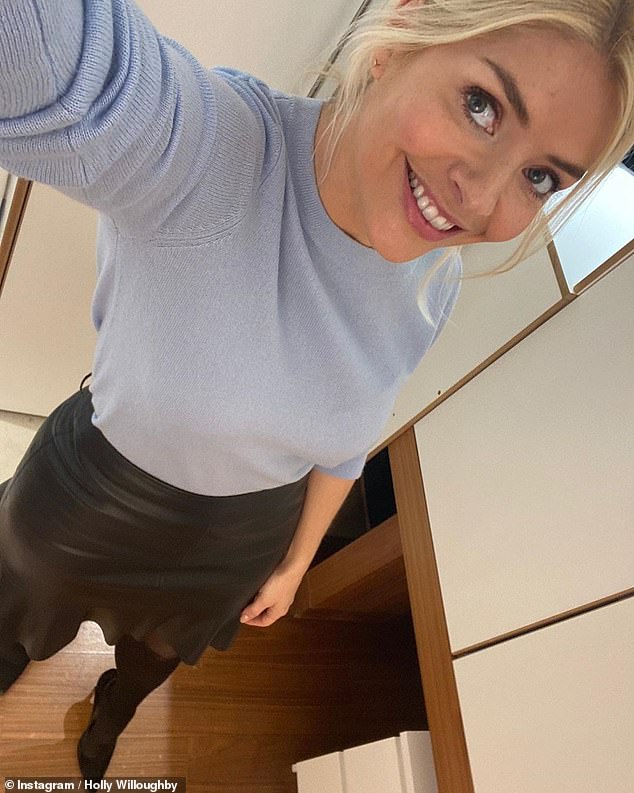 Effortlessly chic: The blonde beauty looked as sophisticated as ever as she styled a pale blue jumper with a leather mini-skirt

Earlier, they appeared on Good Morning Britain for a debate on how to discuss the coronavirus pandemic with children, as ITV launched its new daytime schedule after axing popular shows Lorraine and Loose Women.

During the GMB chat with Piers Morgan and Lorraine Kelly, the mother-of-three admitted she is struggling with what to tell her two eldest children about the global crisis.

Holly and her husband Dan Baldwin are parents to Harry, ten, Belle, eight and Chester, five.

The ITV star told Piers, Phil and Lorraine: ‘I have Harry, who’s ten and Belle, who’s 8. It’s about talking to them in an appropriate way’. 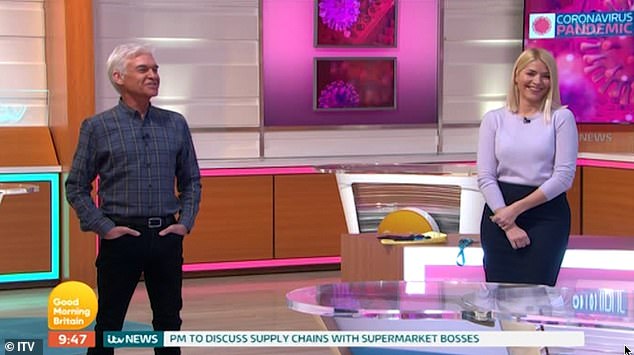 ‘I can’t wait to hug my friend again’: On Monday, the Dancing On Ice hosts adhered to social distancing rules for the first time on the show

‘No one knows your kids better than you do, you know the right approach,’ Phil, a father of two, reassured his colleague.

Piers pointed out that ‘what we’re being asked to do in terms of sacrifice, going home to watch the telly, is not that bad’.

Good Morning Britain star Susanna Reid joined in the chat from home, where she’s been self isolating for the past week after one of her teenage sons developed symptoms.

‘One thing with children, I think it’s good to focus on the good. There are people delivering meals to front line staff and nurses in critical care are getting those fresh meals. That’s an example of the goodness,’ she said.

ITV daytime confirmed in a statement that neither show would continue as of Monday 23rd March, with Lorraine Kelly joining an extended version of GMB, and This Morning continuing ‘as usual’.

‘This decision has been made to minimise the number of staff travelling in and out of our studios and working together on shift at any one time. 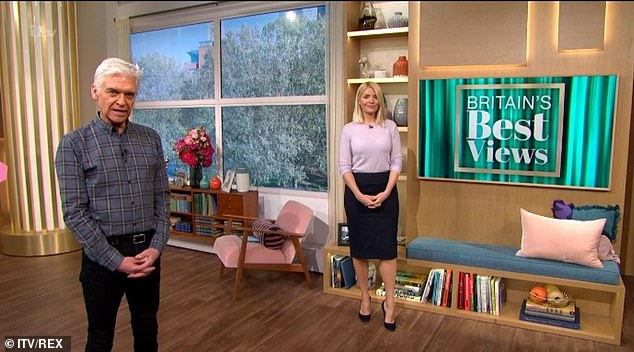 New rules: This Morning has been airing with minimal crew during the global crisis, which has claimed 335 lives in the UK

‘We’re focusing our efforts on providing to viewers the latest news on the rapidly changing situation which aims to offer some stability and continuity in all our lives whilst so many of us are at home right now.

‘That’s why we have taken this tough decision to protect our GMB News programme in the morning and keep This Morning on air for as long as possible.

‘From Monday we will be running an extended version of Good Morning Britain from 0600 until 10am. 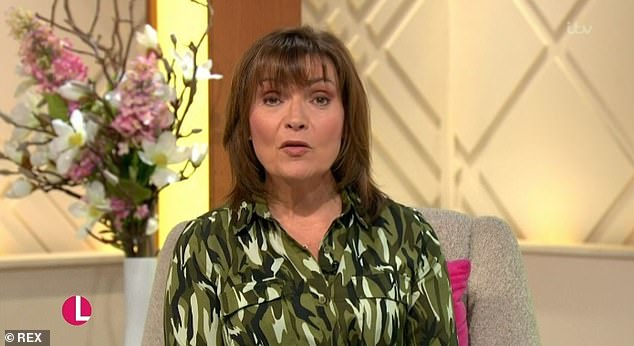 Off air: It was announced on Sunday that Good Morning Britain will be extended by an hour from Monday after Lorraine (pictured last week) and Loose Women were suspended

‘At 9am Lorraine Kelly will join Piers in the GMB studio for the last hour and then hand straight over to the This Morning studio with Phillip and Holly as usual running from 10am until 1230pm.

‘We will then run some of our most favourite repeat episodes of Loose Women from 12.30pm to 1.30pm to give viewers something to smile about each day at lunchtime.

‘We have been reducing our crew numbers over the last week and these changes will enable us to reduce them further and help us build further resilience with the aim of Daytime content continuing to air for as long as possible.

‘Safeguarding the well-being of everyone involved with our programmes is our priority and in this dynamically developing situation we will obviously continue to review these new arrangements on a day by day basis and follow at all times the latest PHE and WHO guidelines.’