Production on long-running E4 soap Hollyoaks is set to be halted at the end of the month, amid the ongoing coronavirus crisis, it has been announced.

Bosses of the popular series put out an announcement on Sunday, also revealing that the number of episodes aired weekly would be reduced from five to three.

The press release reads: ‘Dear Hollyoaks viewers… It is with a heavy heart that we have made the decision to pause filming of Hollyoaks. 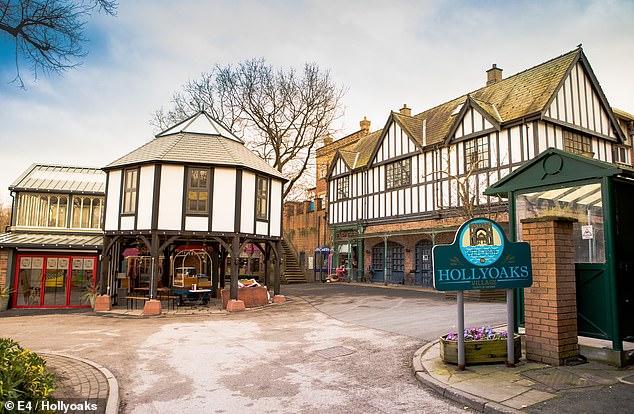 Halting: Production on long-running E4 soap Hollyoaks is set to be halted at the end of the month, amid the ongoing coronavirus crisis, it has been announced.

‘From Monday 30th March, we will be reducing the number of our weekly new episodes from five down to three, which will air Monday to Wednesday.’

Bosses of the show went on to reveal that fans will still be able to get their Hollyoaks fix, with the introduction of a new series in which they can watch all-time highlights.

The press release continued: ‘To make sure we stay on air every week night, fans can look forward to extra special episodes every Thursday and Friday on E4, as we begin a brand new series of “Hollyoaks Favourites”. 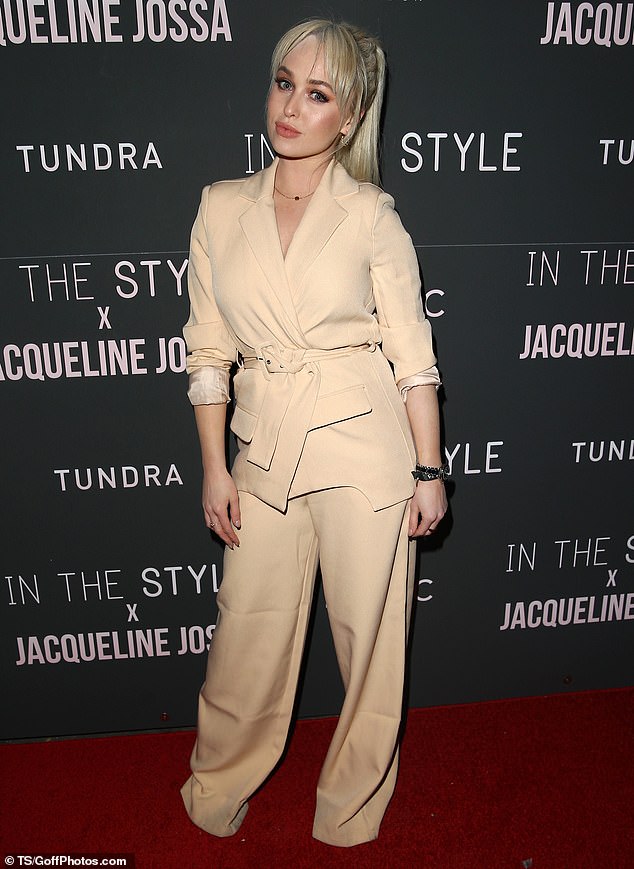 New show: Former castmember Jorgie Porter is set to host a new show called Hollyoaks Favourites as the series’ broadcast is pared down. Pictured in February

‘We will start the series with Mercedes’ fourth wedding, to Dr Browning.

‘Soaps are an important part of people’s lives and we have 25 years of Hollyoaks Favourites to revisit over coming weeks, celebrating the history of the show that you love.

‘We will remain as present as ever on our social platforms so please keep in touch with us here, stay safe and take care of yourselves. Thank you for your ongoing support. Love from everyone at Hollyoaks.’ 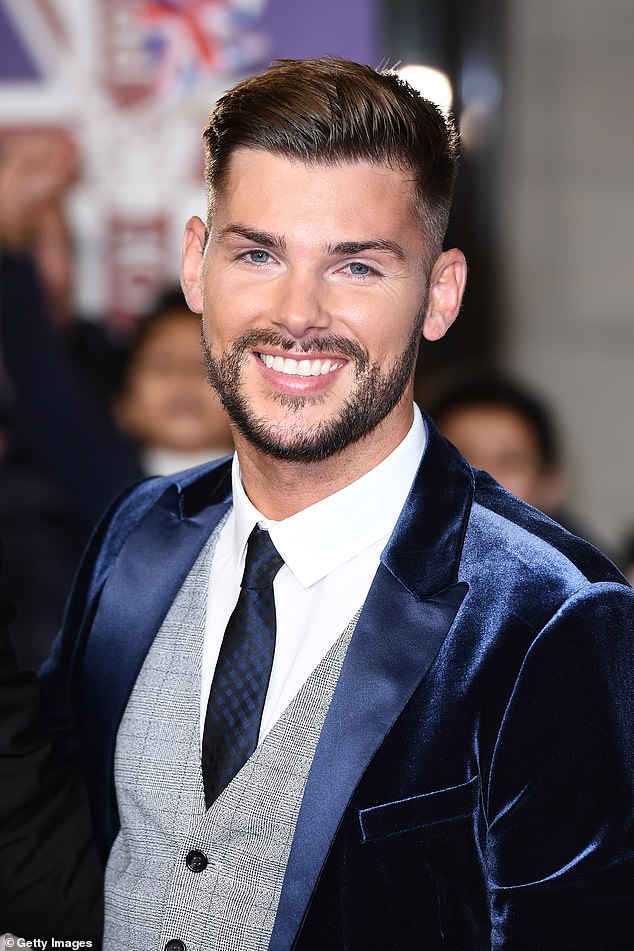 Host: Kieron Richardson will also present Hollyoaks Favourites, which will focus on some of the show’s ‘biggest episodes, from weddings, bust-ups, heartbreaks’. Pictured in October 2019

The news came within hours of ITV’s announcement that the production of Coronation Street and Emmerdale will stop from Monday due to COVID-19 concerns.

A statement from the broadcaster said its staff had been working hard to ensure filming continued ‘whilst adhering to the Government’s latest health guidelines’.

It said enough episodes have been recorded to see both soaps through until the early summer. 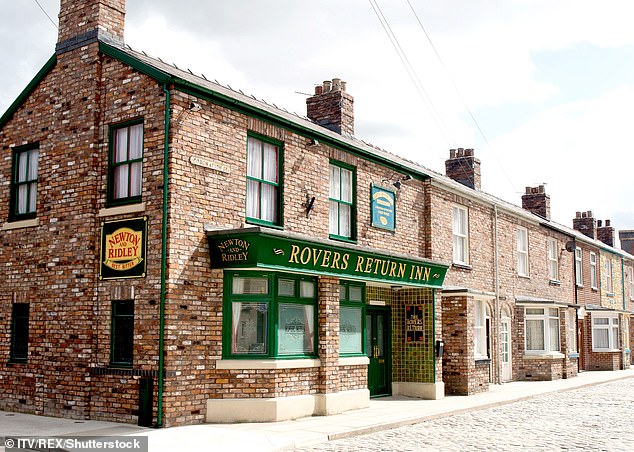 Announcement: The news comes as ITV bosses confirmed they would be halting filming for Coronation Street and Emmerdale from Monday March 23

The statement said: ‘ITV has sadly taken the decision to suspend production of the soaps Coronation Street and Emmerdale with effect from Monday March 23.

‘We’ve been doing our best to carry on filming, whilst adhering to the Government’s latest health guidelines, to ensure we’ve episodes of both soaps airing on ITV until at least the early summer.

‘However, the health and well-being of the production teams, actors, crew and their families is of paramount importance to us and we now feel that the time has come to stop filming.

‘We’d like to thank our viewers for their support and hope they continue to enjoy both soaps in the coming months.’ 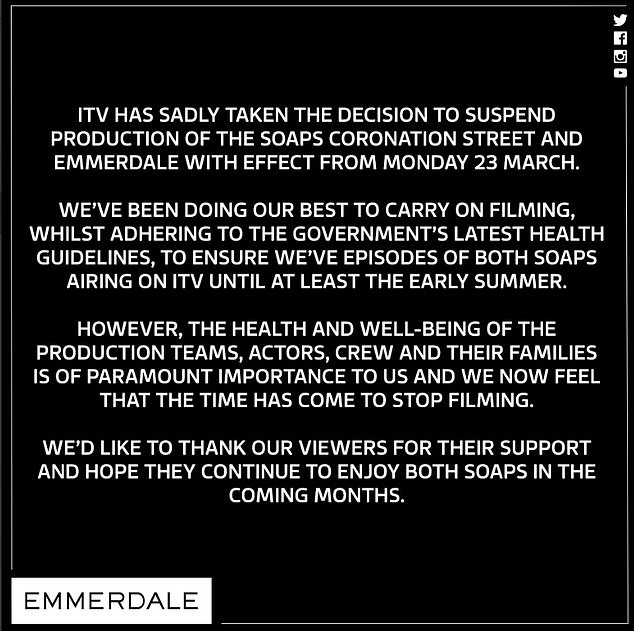 Suspend: A statement from ITV read, ‘ITV has sadly taken the decision to suspend production of the soaps Coronation Street and Emmerdale with effect from Monday 23rd March’

EastEnders fans will still be able to get their fix of Walford from episodes already filmed, and TV bosses say just two episodes will air each week to make them last as long as possible.

Coronation Street tweeted to fans: ‘We’ll still be on air next week as normal, apart from Friday. From 30th onwards we’ll be on three times a week.’ 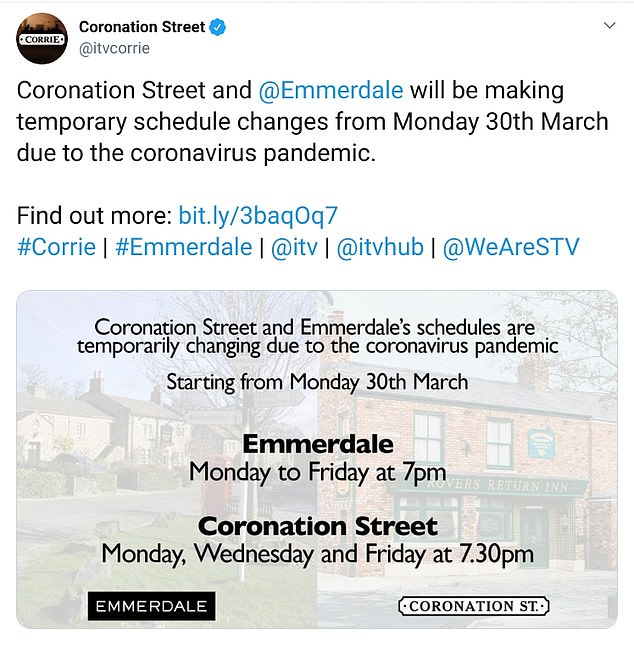 Out of kilter: A statement from ITV warned viewers that some episodes could be ‘out of kilter’ in the next few weeks as they attempt to establish a new transmission pattern

This is not the first time ITV has been forced to take shows off air due to circumstances outside of its control.

For eleven weeks, between August and October 1979, industrial action forced Coronation street (which began in December 1960) off the air, along with the majority of the network.

On Friday Andy Whyment, 38, who plays Kirk Sutherland on Coronation Street, said the show had been forced to rewrite scripts as cast members self-isolated. 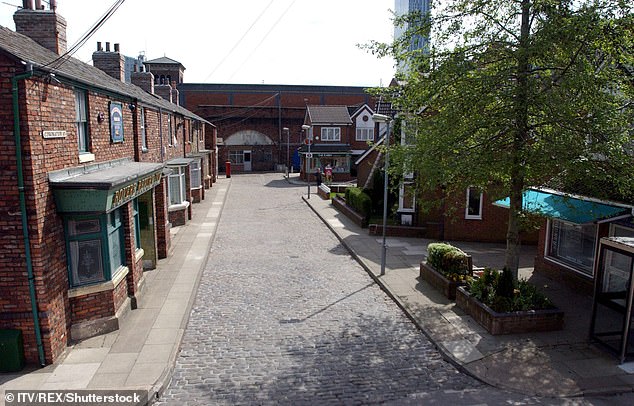 Empty: The sets of Coronation Street (pictured) and Emmerdale will remain empty over the coming weeks if not months 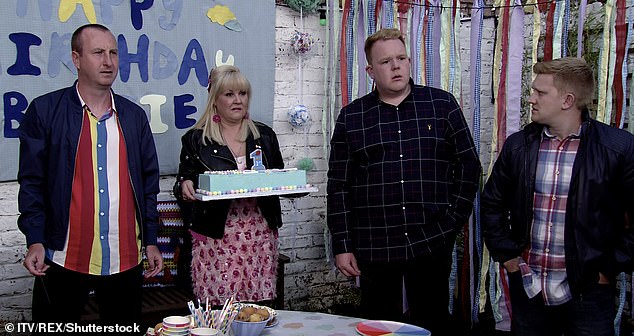 The actor took to Instagram to revealed it’s been a ‘tough week’ amid the upheaval caused by the coronovirus pandemic.

Alongside a snap of himself and wife Nicola Willis enjoying a beer, the star praised everyone on the show for all pulling together during this difficult time.

He penned: ‘So ready for a drink tonight been a tough week at work with rewrites and changes with some cast members having to self isolate.

‘I just want to say I’m so proud of everyone @coronationstreet the way people have mucked in this week has been incredible and shows how much love there is for the show. 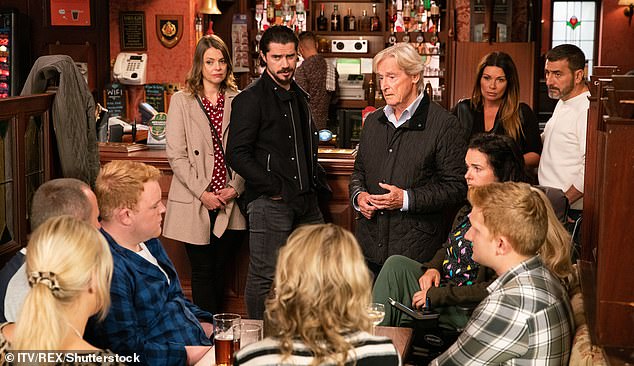 Hard times: The actor, 38, who plays Kirk Sutherland on the ITV soap took to Instagram on Friday where he revealed it’s been a ‘tough week’ amid the upheaval amidst the coronovirus pandemic

His co-star Georgiua Taylor, who plays Toyah Battersby was in agreement, as she wrote: ‘Everyone has been incredible haven’t they?

With Andy replying: ‘couldn’t agree more we have an amazing cast and crew xx.’ 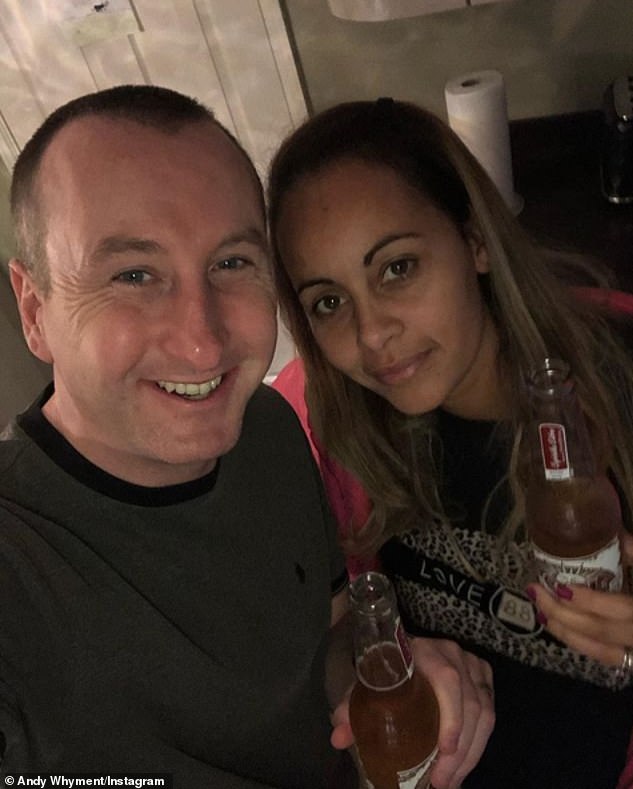 Tribute: Alongside a snap of himself and wife Nicola Willis enjoying a beer, the star praised everyone on the show for all pulling together during this difficult time

Jane Danson, who plays Leanne Battersby, added: ‘Totally agree. We all worked together at the worst of times. Its been difficult but everyone on and off camera has pulled together. Stay well everyone x.’

It comes after both Coronation Street and Emmerdale bosses confirmed that the soap’s planned storylines will be affected by their scheduling changes during the coronavirus pandemic.

An ITV spokesperson revealed that episodes that were planned to air around Easter or VE Day in May will inevitably be shown on a different dates, after cutting back on their weekly broadcasts to ration their filmed episodes. 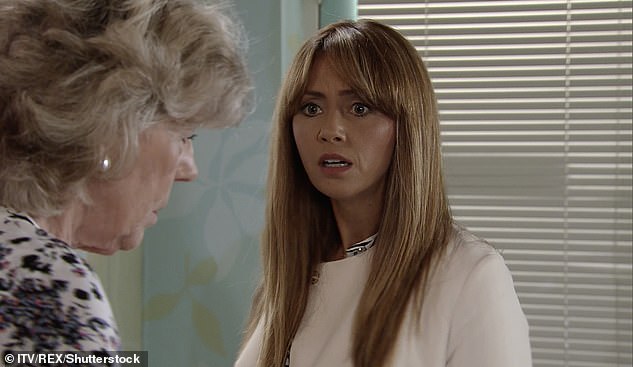 Which UK shows have stopped filming?

The Only Way Is Essex

In their statement a spokesperson told MailOnline: ‘In the coming weeks some episodes of Coronation Street and Emmerdale will understandably be out of kilter due to the temporary transmission pattern for both programmes which takes effect from Monday 30 March.

‘Episodes due to broadcast at Easter and those commissioned and filmed to commemorate VE Day, for instance, won’t now air on the dates we’d anticipated.

Coronation Street will now air just three episodes a week, while Emmerdale will only air five.

The ITV spokesperson also confirmed that despite government advice for residents to avoid social contact in pubs and restaurants, they would be continuing to include scenes in The Rovers Return and Woolpack.

They told MailOnline: ‘Additionally, as both Coronation Street and Emmerdale film many weeks before they air on ITV, episodes will continue to feature scenes set in the Rovers and Woolpack and other communal areas.

‘Although the Government’s latest guidelines indicate that people should avoid such public spaces, we’d ask viewers to make allowances for the fact that filming took place before the coronavirus pandemic… and to make sure they follow the most recent Government’s health advice.’

Corrie and Emmerdale join a long list of programmes that have been affected by the COVID-19 pandemic, with many shows including rival soap EastEnders, Casualty, Holby City and Call The Midwife forced to halt filming. 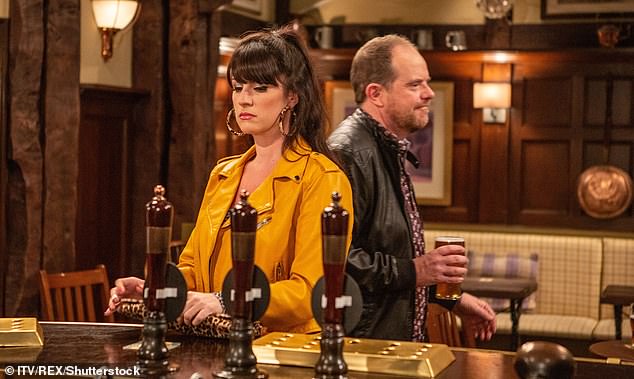 Circumstances: This is not the first time ITV has been forced to take shows off air due to circumstances outside of its control 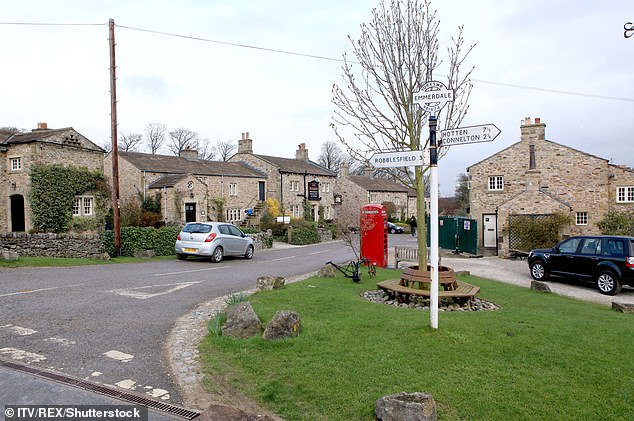