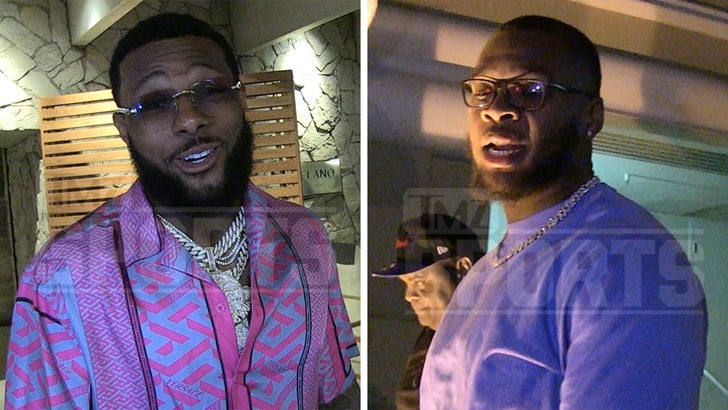 Daniel Jones, are you ready?!?

Kayvon Thibodeaux and Evan Neal — the New York Giants’ top picks in the 2022 NFL Draft — tell TMZ Sports they can’t wait to get started and work towards bringing a Super Bowl back to the Big Apple!!

The Giants were able to snag some of the best athletes in the draft class in the first round on Thursday … using the #5 pick on Thibodeaux, the edge rusher out of Oregon.

The #7 pick was used to get Neal, the offensive tackle out of Alabama … a must-have for Jones, who’s been punished in the last three seasons with a struggling offensive line.

But, that could all change soon … ’cause we asked Neal if he’s gonna keep the 24-year-old QB safe from now on, and he hit us with an, “Oh, yeah!”

“I’m going out there and working my hardest to be the absolute best player that I can be.”

And, Thibodeaux — who won 2020’s Morris Trophy as the best defensive lineman in the Pac-12 — wants to add another Lombardi Trophy in MetLife Stadium’s display case … and has a message for DJ.

That’s great for Jones’ sake … ’cause the Giants just declined his 5th-year option — so if the QB doesn’t start winning ASAP, it might be the end of the road for DJ in New York.