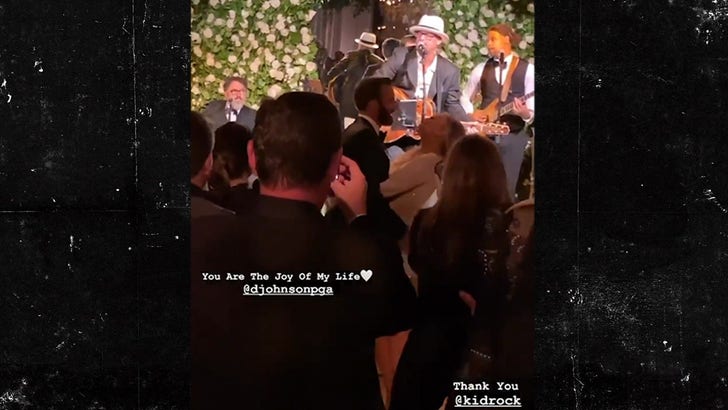 Dustin Johnson and Paulina Gretzky had a self-proclaimed “American Bad Ass” at their wedding this weekend … with none other than Kid Rock taking the stage to perform for the newlyweds.

DJ and the hockey legend’s daughter tied the knot at a lavish event at Blackberry Farm resort in Tennessee on Saturday … and Paulina shared a short video of the reception, which featured the controversial singer.

“You are the joy of my life @djohnsonpga,” Gretzky said on Instagram. “Thank you @kidrock.”

Now, KR has a history of being unapologetically himself on the mic — dropping homophobic slurs and going after Oprah Winfrey in the past.

His performance over the weekend seemed to be free of controversy … as Rock sang a cover of Chris Stapleton‘s “Joy of My Life.”

The musical act might not be as random as you think — Rock is tight with DJ and Wayne … and they’ve hit the links together over the years.

DJ and PG got engaged back in 2013 and have two children together … and while the couple hasn’t shared any behind-the-scenes shots of their big day, you can bet it’s just a matter of time.