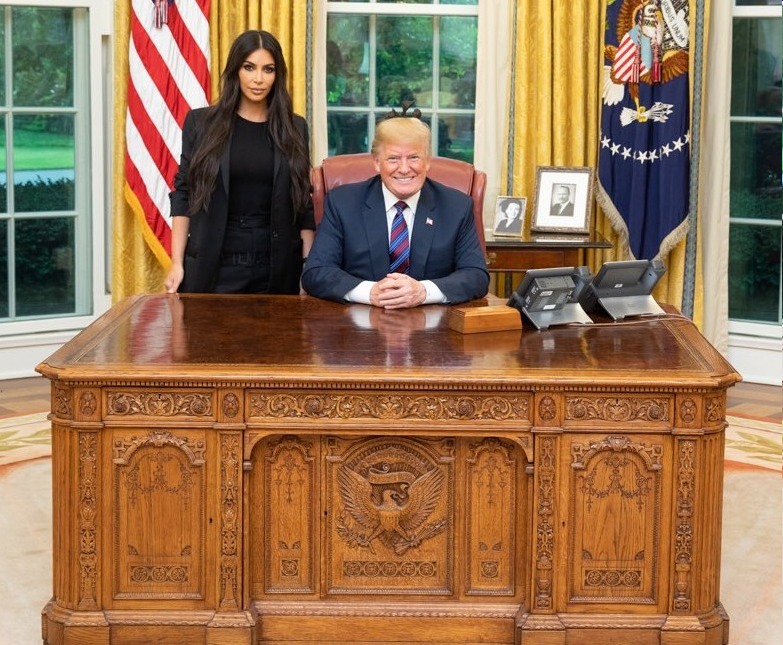 Kim Kardashian has visited the Trump White House (all-white house) several times over the past few years. There are two times where she was photographed inside the White House – once in 2018, in the Oval Office with Donald Trump, and in 2019, when she took part in a press conference about justice reform and recidivism alongside Jared Kushner, Ivanka Trump and Donald Trump. Kim was the “celebrity face” of the movement to free Alice Marie Johnson from prison, and since then, Kim has 100% used her connections to the Trump and Kushner families to get what she wants, which is more pardons and commutations. I’m pretty sure Kim has been to the Trump White House several more times, which have not been publicized.

As I’ve said before… I don’t like or love the choices she’s made in aligning herself with the Trump administration, but I respect the fact that Kim has consciously made the choice to do these transactional exchanges: her coolness/celebrity in exchange for freeing women and raising awareness about an important cause. Kim was back at the White House this week for another exchange: Trump commuted the sentences of three more women, Judith Negron, Crystal Munoz and Tynice Nichole Hall. Here are the tweets from the White House & Ivanka:

Today, they met with the President in the Oval Office along with @AliceMarieFree and @KimKardashian. pic.twitter.com/9pGp71BUOF

At the recommendation of @AliceMarieFree, @KimKardashian and the @cut_50 team, these 3 mothers were granted clemency by @realDonaldTrump last month and are already using their second chance to pay it forward! pic.twitter.com/4ysQku3Mag

Kim used the trip to highlight the women’s stories on Twitter (you can see all the tweets here):