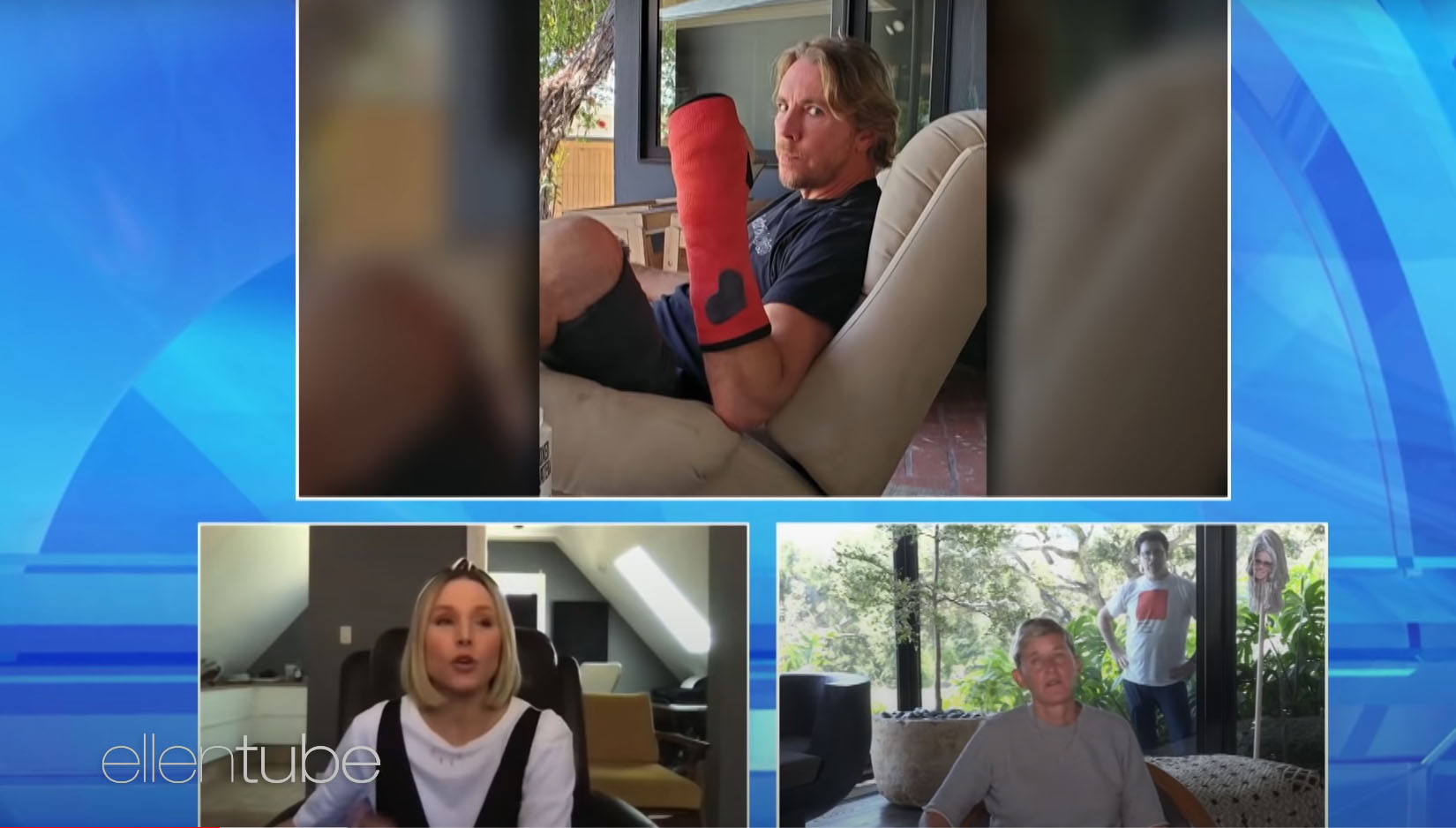 Kristen Bell does those cringey “momsplaining” segments on Ellen still. Some of the new ones were taped before lockdown as they include non-social distancing. She had a few with Ellen’s hapless producer, Andy, which were so hard to watch. That poor guy was so flustered! In the one I saw they tried to give the “where babies come from” talk to kids. You guys owe me for watching that! Kristen seems to be completely on board with Ellen’s type of humor making people uncomfortable. Her interview with Ellen was just OK. I got the sense that she was mirroring Ellen’s demeanor, if that makes sense, because she came across a lot like Ellen. Here’s some of what she said.

On why Dax is wearing is cast on his lower left arm
He went on an essential off-roading trip right when quarantine began. It was by himself. He was off-roading in the mountains and he had a buddy with him, but they were in separate off-road vehicles. He got to the edge of a cliff [and] he’s very embarrassed about this injury because the cardinal rule is you don’t put your hands on the roll cage or outside the car at any time. He was sitting on the edge of a cliff and he put his hand up just to look out and the weight of his arm tipped his Polaris Rzr over and don’t get injured when you’re inside them, but it did crush all the bones in his hand.

Last week he had seven pins put in. Last week one of them started to eject itself from his cast. He [asked his doctor if he could pull the pin out] and [he did]. [Ed note: They showed the video it was gross]. Now he’s a doctor.

On how she reacted when Dax told her
He didn’t call me, he drove home [with one hand]. The first thing he said when he walked in the door was ‘I don’t want to be in trouble.’ Which is crazy because he’s never in trouble with me. I mean, I’ll let you know if I’m disappointed in your actions but I’m an adult, and he’s an adult said ‘You’re not in trouble, but it’s not the smartest move you could have made.’

On the foster dog, Frank, she got a year ago and decided to adopt
He wouldn’t be more than a foot away from me. He was so into me, but it wasn’t out of nerves. When this dog stares at me I know he’s looking at me with bedroom eyes. He’s in love with me. I just [had] to keep him. He follows me around absolutely everywhere looking at me with sex in his eyes. This dog is going to murder me one day.

That story about Dax not telling her about smashing his hand is telling, isn’t it? It kind of speaks to their relationship. I also found it so weird how she talked about her dog. The dog is attached to you, it doesn’t have bedroom eyes!

Here’s the first part of Kristen’s interview. The second part, where she talks about her dog, is here.

This is my first ever bathroom selfie. I'm quite pleased with it. Because #TheWorldNeedsMorePurplePeople is coming out soon!!! And with everything closed, I crafted my own tee shirt before I recorded the audio book this morning from my house. @hartben and I wrote #TheWorldNeedsMorePurplePeople, illustrated by @d_wiseman, as a guide for kids to become #PurplePeople. As @hartben said, "this book is our way to spark some human connection back into the world." I am so very proud of this book, thank you @hartben,@d_wiseman and @randomhouse ? #ImAPurplePerson