Much like your favorite pair of Uggs, Kim Kardashian and Kanye West’s relationship has been around forever and refuses to give up. Considering they work in an industry where the average marriage lasts eight months (or in Kim and Kris Humphries’ case, 72 days), it’s a miracle these two are still going strong—and to be honest, recent reports claim there’s been some tension thanks to this whole self-isolation thing.

That said, Kim and Kanye have made it this far, and after almost a decade together, their relationship deserves to be preserved in the annals of American history. In the meantime, here’s a timeline.

Kim Kardashian and Kanye West meet on the set of a Brandy music video. “I met him, I think, in 2002 or 2003,” she told Ryan Seacrest during the KUWTK anniversary special. “He was recording a song with Brandy, and I was her friend. I vividly remember hanging out with him, and then they did a video together, so I’d see him a few times. He was asking his friends: ‘Who is this Kim Kardajan?’ He didn’t know what my name was.”

Kim and Kanye bond while working on a pilot for something questionable-sounding called Alligator Boots.

“We had met before this project (back in 2003),” Kim said on her website. “But I would say this is when we first really connected.” 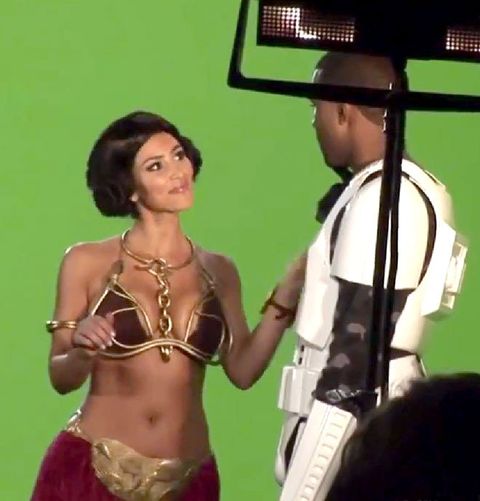 Kim marries Kris Humphries for an iconic 72 days but admits she was simultaneously having feelings for Kanye, whoops! Here’s how she remembered it during the KUWTK anniversary special:

Naturally, everyone assumes that last line is Kris Humphries shade since he was playing for the Brooklyn Nets at the time, an NBA team that Jay-Z owned.

Before long, Kanye starts showing up on KUWTK to clean out Kim’s closet and revamp her fashion:

Kanye reveals that Kim is pregnant with their first child while performing onstage in Atlantic City, telling everyone to “stop the music and make noise for my baby mama.” Here, enjoy this not-that-great video of the announcement:

Kim and Kanye attend their very first Met Gala as a couple. For reasons no one will ever understand, Kim wears this: 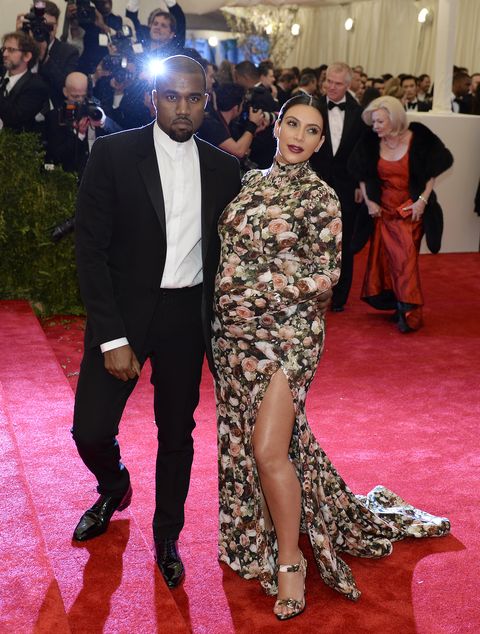 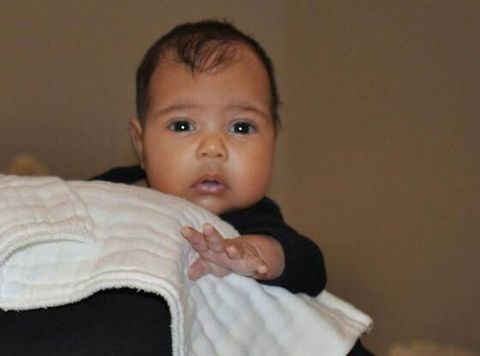 While we’re here, can someone start a petition real quick to bring Kris’s show back? I feel robbed.

Kanye spends $3 million to propose to Kim by renting out a football stadium and putting “PLEEEASE MARRY MEEE!!!” on the jumbotron. Not at all extra!

Kim and Kanye get married in Italy and the photos are literally TO DIE FOR.

5 years ago today I married my best friend. ✨

Kim gives birth to her second child, Saint West, and a couple of months later, she shares the very first photo of him on her now-defunct website. Look at this lil cutie: 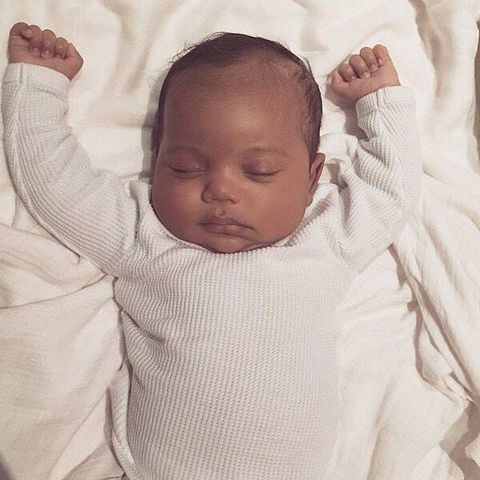 A source tells People that Kim is sick of Kanye’s Twitter rants: “What causes friction in the marriage, however, is Kanye’s compulsive tweeting,” the source says. “Kim can’t stand it. She is all for self-promotion but doesn’t approve of Twitter drama.”

Kanye and Kim’s fall pretty much sucks. Kim is robbed at gunpoint in Paris and Kanye is hospitalized for exhaustion. “Kanye and Kim had a stressful few months,” a source told People. “It’s been a tense time. But Kim is happy he’s getting help.”

Kanye crushes his Valentine’s Day gift to Kim, giving her a literal wall of flowers to pose with:

Kim and Kanye get a little flirty after she posts THIS photo to Instagram: 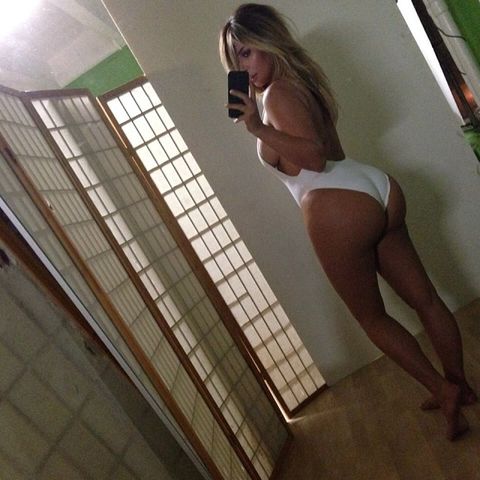 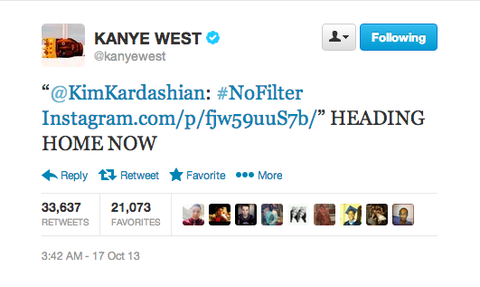 For Christmas one of Kanye’s gifts to Kim included items from @adidas, @amazon, @apple, @Disney and @netflix along with stock for each company. pic.twitter.com/nvcmJshQt9

Kim and Kanye welcome their daughter Chicago via surrogate, and Kim shares her first picture on social media with a Snapchat filter.

gratitude and happiness best describe what my wife means to me. I’m deeply grateful and purely happy 😊

Rumors that Kim and Kanye are going through a rough patch hit the internet, but Kris Jenner shuts them TF down. “I think they’re just so solid,” she said. “They’re so connected and they love each other very much and they have a family that they’re committed to. They’re committed to one another, and people, you’re not always going to agree with each other forever. You’re going to have differences. You’re going to have things that pop up. You’re going to have hiccups. There’s a lot of things in life as human beings that we all deal with, especially if we have a partner, a spouse. I think they’re so committed to one another that things like that probably bring them closer together.” Well, guess that settles that.

Kanye kidnaps Kenny G and traps him in a room full of roses with no means of escape in the name of Valentine’s Day. Help.

Kim and Kanye welcome their fourth child, Psalm, who is born via surrogate. Here’s his debut pic!

Kanye starts planning his Jesus Is King tour, and apparently Kim has concerns. “Kim supports a tour, but still has concerns,” a source tells People. “She doesn’t want him to go crazy and do an intense tour with no breaks. She wants him to focus on his well-being and mental health, too.”

Kim calls Kanye “very simple” repeatedly in an interview with Stellar magazine (via Daily Mail), saying “He’s very simple. If I bring him a warm brownie and ice cream, he’s very happy and that’ll win me points for, like, a good week.”

Kimye hits up the NBA All-Star game and get caught on the Kiss Cam. Cute, but things get awkward fast when Kanye fully ignores Kim for a full five seconds, causing Twitter to roast him.

Kanye once again gets roasted by Twitter, this time for leaving Kim in an elevator with literally all their bags. Like, the doors closed on her and everything.

Kanye got off that damn elevator left Kim with the bags, the door started closing and all 😂😂😂😂😂 pic.twitter.com/gxBpyOGBaW

As nonessential workers begin to isolate amid the coronavirus pandemic, reports emerge that things are getting tense between Kimye. A source tells Us Weekly that the couple “have been arguing a lot during the quarantine” and that “Kanye is really getting on Kim’s nerves.” Le yikes.

What is everyone doing to keep your kids entertained??? As a family we are social distancing but need some fun ideas of what to do! Any suggestions would help!

A source tells British tabloid The Sun that Kimye are staying clear of each other thanks to ongoing tension in their ’ship: “Kim and Kanye are arguing and at each other’s throats during this pandemic. Kim is getting stir-crazy, as she’s used to being on the go. It’s also a lot of time alone with the kids for her.”

Oh, and the source also adds that Kimye have “been staying at opposite ends of the house to keep things civil.” Again, yikes, but to be fair, Kim posted this very cute pic of Kanye around the same time this report came out, sooo:

That about brings us up to date, but fear not: We’ll be updating this very important timeline as Kimye’s relationship progresses.