The 19-year-old was accused on Sunday of lying about having an eating disorder in order to get “more air time” on Rinna’s popular Bravo reality TV show The Real Housewives of Beverly Hills. Only it’s what the teenager said in response that really caught our attention!

It all started on an Instagram Story Sunday afternoon, when Amelia Gray Hamlin got frustrated with another IG account that had been accusing her of faking her long-standing eating disorder. The motivation, according to that other account, was for Hamlin to pop up with more frequent air time on the hit Bravo realty TV show. Only one problem there: apparently it’s like pulling teeth to get Amelia to film with her mother! That’s what the teenager herself said in response to the accusation, at least, and we’ve got a screenshot of the damning moment for posterity (below): 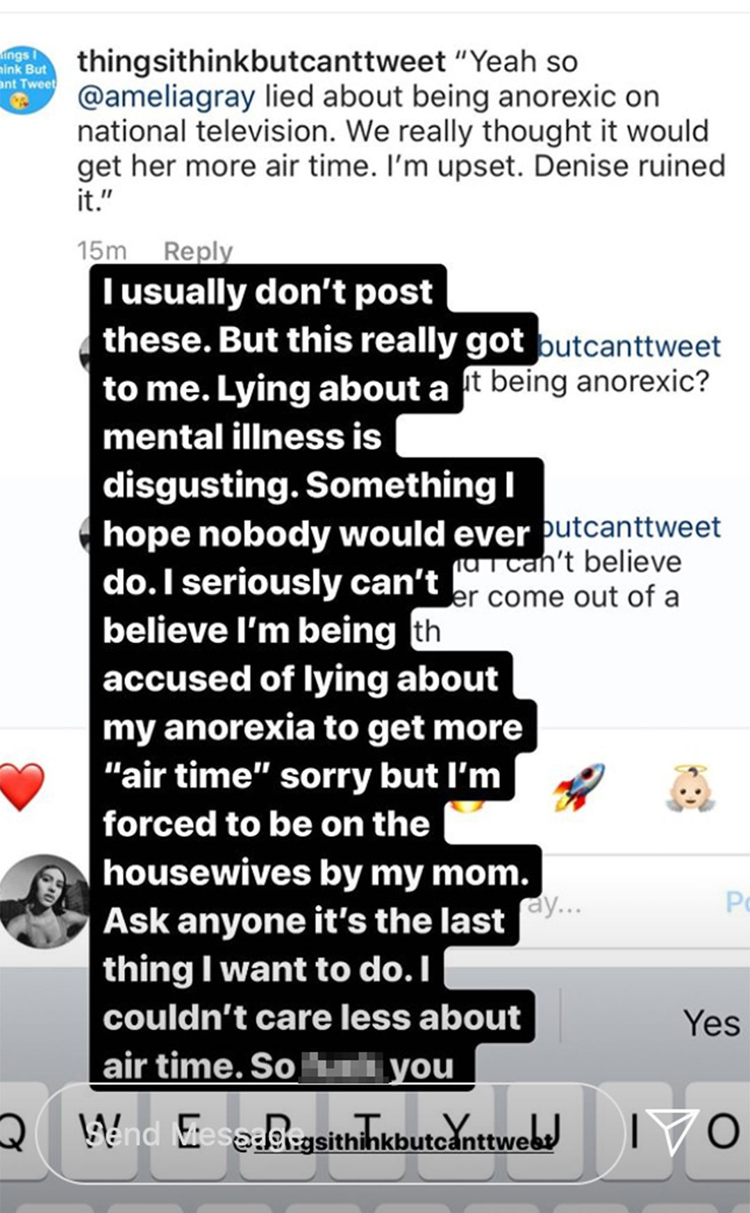 Amelia has been so serious about battling back against anorexia over the last several years, sharing touching, personal messages straight from the heart about her battle and recovery. So, it’s really disgusting someone would call her out for lies. Take this post from March of 2018, for example:

I feel comfort with finally posting something that I wish I was confident enough to post long ago. I’m getting many comments comparing my body today vs. my body last year. I think that the support from my followers has really pushed me into writing this. Anyways, last year at this time there was no doubt that I was not okay. Not only physically but also mentally. I feel like sometimes people forget that just because your job involves being in front of the camera, doesn’t mean you can’t have bad days. We’re human. All of us. Instead of people ever commenting on my mental stability, people commented on my weight. Usually, when people are struggling with an eating disorder it stems from your mind, and your body is a reflection of it. I could go on and on about that time of my life, but the most important part about it was waking up one morning and deciding to stop sabotaging myself. My health, my physical health, my mental health and everything about myself. Once I got the help that I needed, shortly after the second photo was taken, I began to try to love myself for me. I am SO beyond humbled and grateful to have the platform that I do at such a young age, and to wake up every morning with a little girl reaching out to me and telling me I am her inspiration, really makes me feel like I have a purpose. I went through this journey not for attention, not for people to pitty me, but to help. I am on this earth to help people, and I know that. One in 200 women in the US suffer from anorexia. And I want to help. The first photo, taken today is not a photo of the perfect girl. That is a photo of me, trying to figure out my body, and owing my curves that I naturally have, and not forcing myself to starve them away. I have a lot of health complications after starving myself for so long so it’s going to be a journey that I go through for a large part of my life. I still have an extremely healthy life style and I workout so hard all week to maintain my Body. Not to say that recently being diagnosed with hashimotos has also been an extreme challenge for me to balance when still getting over this part of my life, but I am getting there. One day at a time. I want to help.

Soon after the story got picked up, Amelia backtracked her statements about being forced to join the show and explained:

“CAN EVERYONE PLEASE CALM DOWN AND STOP!!! My mom is so so amazing. She ‘encouraged’ me to be on the show in my opinion. I was 12 and didn’t know what it was going to be like. And I’m so glad that she encouraged me to do so. I’ve been able to touch so many souls with my story. I should have said ENCOURAGED NOT FORCED!!!! THAT WAS THE WRONG CHOICE OF WORDS. All I was trying to say was that I’m not just on this show for a f**king story line you guys chill.”

“I just literally said no to something I did not know anything about. My mom ENCOURAGED ME to do so. Obviously it’s been six years. I could have stopped filming long ago. Can you just all chill? I haven’t ’cause I have a story to tell to HELP people and now I’ve become super close to all the women and I love them.”