Meghan Markle, 40, and Prince Harry, 37, have reportedly been invited to Balmoral by the Queen as part of an olive branch reportedly extended to the couple. But Loose Women panellist Jane Moore, 60, cheekily suggested Her Majesty should invite the Netflix crew in a bid to get the Sussexes’ to accept the invitation.

Back in April, Harry and Meghan visited The Netherlands for the Invictus Games, and later visited the UK to celebrate the Queen’s Platinum Jubilee.

It has since been reported the Queen invited the Sussexes to her beloved summer retreat in Scotland, Balmoral, as an olive branch.

According to reports, Her Majesty arrived at Balmoral late last week and is set to stay for 10 weeks in the seven-bedroom Craigowan Lodge on the property. 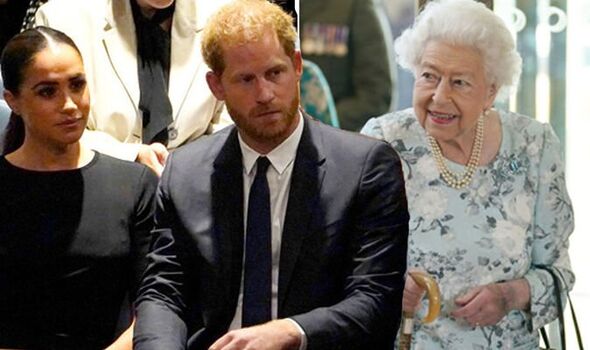 Writing in her latest column for The Sun, Jane addressed the move as she suggested how the royals could potentially “build bridges”.

The Loose Women host wrote: “The Queen has invited Harry and Meghan to stay at Balmoral but sources say they would be ‘stunned’ if they accept.

She added: “But if Her Majesty is keen to continue building bridges, perhaps extending the invite to include a Netflix crew might clinch the Sussexes’ attendance.”

A Balmoral source told the same publication: “Staff have been told to expect the full list of royals including Harry, Meghan and their children Archie and Lilibet.

“They are preparing for the Sussexes.”

But US outlet PageSix has since reported that the Sussexes have not been invited.

The couple is expected to stay in the US ahead of the publication of Harry’s much-anticipated memoir this fall.

Royal commentator Phil Dampier said: “It’s a snub, but I don’t think it’s any more or less of a snub than their general attitude in the round to be honest.

“I’m sure the Queen did invite them and there is an open invitation, but it doesn’t surprise me that they’re not going.”

He added that Meghan is not keen on things such as “hunting, shooting and fishing” which often takes place during the holiday break.

Meanwhile, it emerged in May that Meghan’s animated show Pearl had been dropped by the streaming giant, Netflix.

It comes after Netflix lost 200,000 users over the first three months of 2022, falling well short of predictions it would add 2.5 million subscribers.

The Archewell Productions project was set to focus on the adventures of a 12-year-old girl inspired by influential women from history.

Netflix insisted Archewell Productions remained a valued partner and they are continuing to work together on a number of projects, including the documentary series Heart Of Invictus.

Fans are looking forward to the release of Meghan’s first podcast series for Spotify.

Harry and Meghan are living in California after quitting as working royals in March 2020.