SEBASTIAN SHAKESPEARE: War hero poet who was the real Captain Corelli dies at 96

He says he felt ‘doomed to perpetual failure’ in his youth, before achieving fame with his best-selling novel Captain Corelli’s Mandolin.

Now Louis de Bernieres has paid a final, heartfelt tribute to the man who made it possible — his father, Piers de Berniere-Smart, who has died peacefully aged 96.

‘I wouldn’t be a writer at all without him,’ de Bernieres tells me.

‘He used to recite Shakespeare during Sunday lunch. He wrote poetry — and never hid it. A lot of the poems were about me and my two sisters. So it was normal to aspire to be a writer.’

His father’s World War II experiences had an indelible influence too. 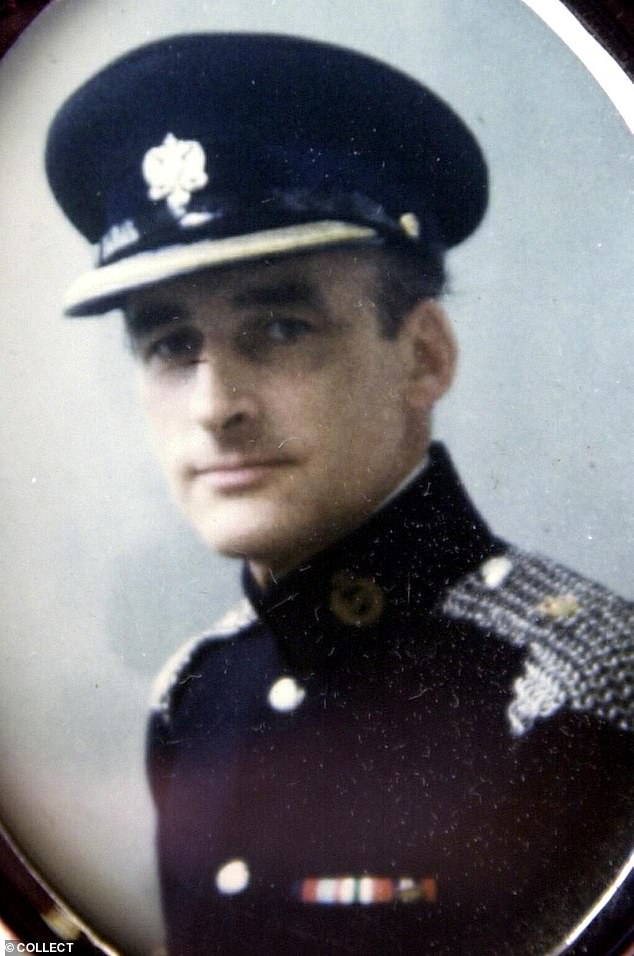 Piers de Berniere-Smart, who has died peacefully aged 96, was the inspiration for his son’s novel Captain Corelli’s Mandolin

‘He was the last surviving officer from his regiment, the Queen’s Bays, to have seen action,’ says de Bernieres.

After initially serving in North Africa, his father crossed the Mediterranean with the 8th Army for the Italian campaign.

‘He landed at Rimini, on the Gothic Line,’ explains de Bernieres, 65, whose dedication in Captain Corelli’s Mandolin reads: ‘To my mother and father, who […] fought against the Fascists and the Nazis […] and were never thanked.’

But though his parents had a long and happy marriage, which only ended with his mother’s death nine years ago, they might never have met, had a wartime love affair of his father’s not perished. 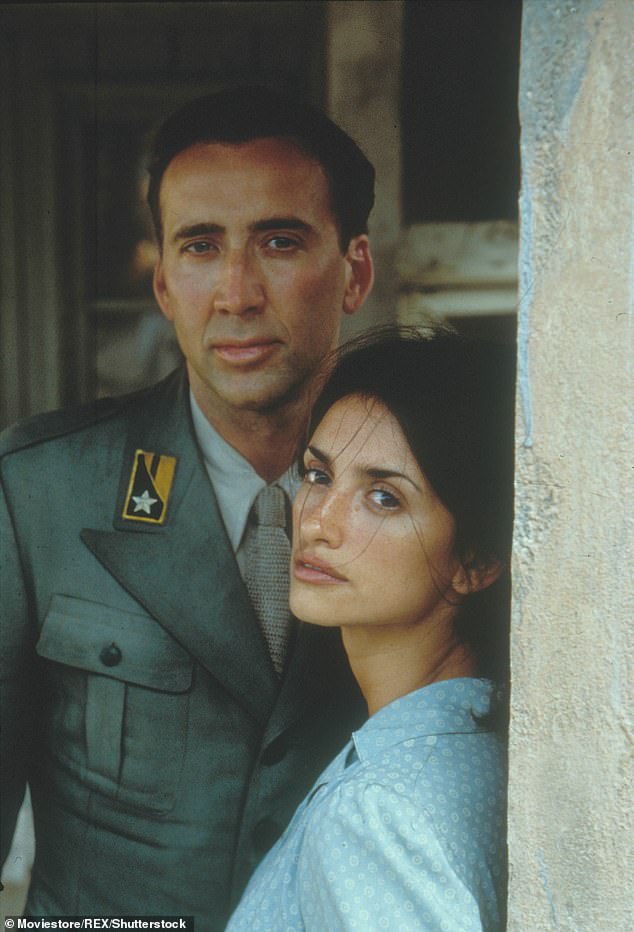 Nicolas Cage and Penelope Cruz in the 2001 film adaptation of the book, ‘Captain Corelli’s Mandolin’

‘He told us that he’d had a romance with an Italian woman during the war. They’d actually got engaged, but her family wouldn’t let them marry because he wasn’t a Roman Catholic.’

Piers left the Army after his regiment was amalgamated in 1959.

‘He still insisted he was a Queen’s Bay rather than anything else. He then ran the Shaftesbury Homes, for disadvantaged children.

‘After he retired, he raised money for SSAFA [the Armed Forces’ charity]. He had an amazing life, but never had any acknowledgement of any kind,’ says de Bernieres.

Just six people could attend his funeral, including his daughters Susanna and Charlotte and de Bernieres, who brought not a mandolin but his soprano saxophone, on which he played The Last Post. 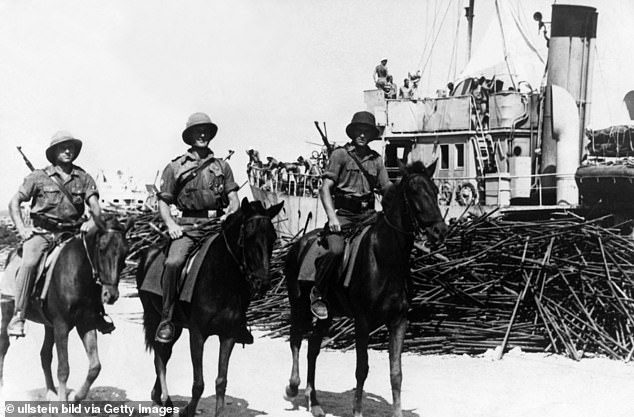 Former Home Secretary Amber Rudd has signed up to present a new radio show. Signs are it will make uneasy listening for Donald Trump. Rudd asked Madeleine Albright, U.S. Secretary of State under Bill Clinton, during a webinar for the Aspen Initiative, ‘Is there any chance Trump might lose the election this year? Cheer us up and say yes!’ Replied Albright: ‘I’m obviously hoping he will and I am doing everything I can to help to make it happen.’

Row can’t go on for Chatto

Princess Margaret’s burly grandson, Arthur Chatto, trained tirelessly in preparation for rowing round the entire coast of Britain. Sadly the 21-yearold, who was due to commence the challenge this week as part of a four-man team to raise funds for Just One Ocean, a charity committed to clearing up our seas, will have to wait. ‘Due to the Covid crisis we have to delay our start date,’ says a spokesman for the race. Edinburgh University student Arthur, whose mother is Lady Sarah Chatto, may be grateful for more training time having admitted the 30-day adventure would be ‘very hard’. 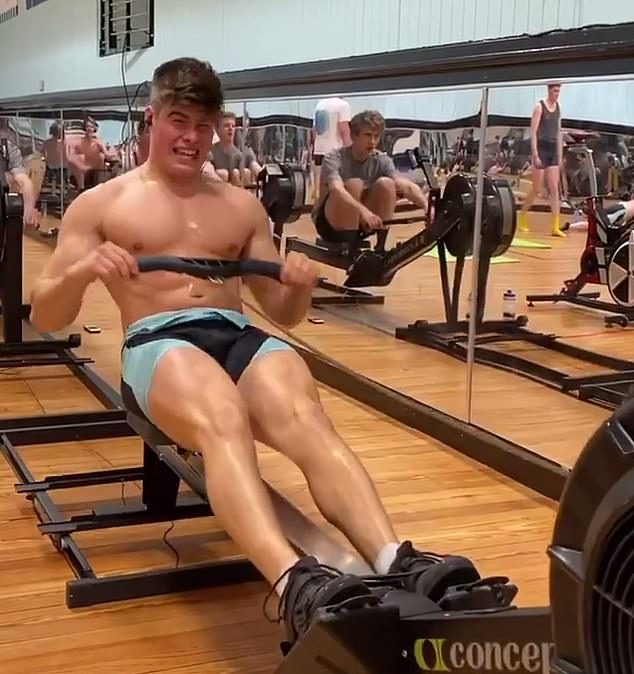 Lion King star Jeremy Irons, who voiced Simba’s evil uncle, Scar, in the Disney animated classic, has revealed the real reason he spurned the premiere of the 2019 live action remake in which Chiwetel Ejiofor plays his character. ‘I was invited, but it’s like being invited to the wedding of your exwife,’ he says. ‘You think: ‘I wish her well, but I actually don’t want to be there.’ Irons, who has been married to Sinead Cusack for 42 years, was married to former actress Julie Hallam for less than a year in 1969.

Classical Katie gets down and dirty in garden

Radio 3 presenter Katie Derham reveals she has let her personal hygiene standards slip during lockdown. The 49-year-old mother of two , who is married to restaurateur John Vincent, has been doing a lot of gardening, which entails getting her green fingers grubby. ‘My personal standards are slipping, I’m not going to lie,’ she says. ‘I have dirty fingernails all through the day and at night. I think, ‘Shall I give them a second scrub? Can I be bothered? No. They’re just going to get dirty again tomorrow. Nobody’s going to see.’ Speak for yourself, Katie. Katie Derham who is married to restaurateur John Vincent, has been doing a lot of gardening, which entails getting her green fingers grubby

Countryfile’s Julia Bradbury is passionate about the great outdoors, but she also knows how to have a good time in the bedroom. This week she took to dancing on her bed to Boney M. Julia, who lives in West London with her property developer husband, Gerard Cunningham, and their three children, shared the video online and described her moves as ‘bad mum dancing’. After a playful suggestion that she was ‘on the sauce again,’ Julia pointed out that she filmed it at 11am. 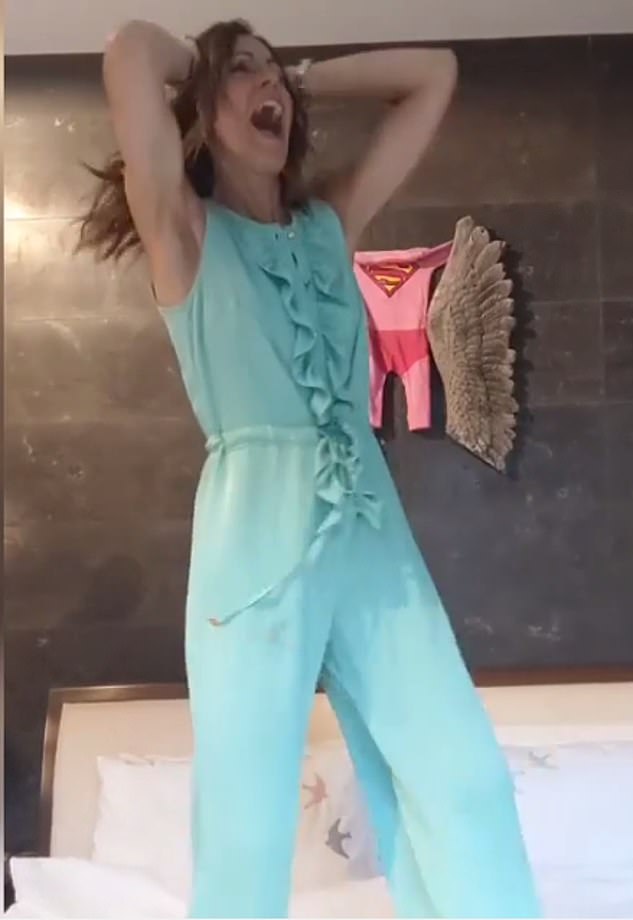 Julia, who lives in West London with her property developer husband, Gerard Cunningham, and their three children, shared the video online and described her moves as ‘bad mum dancing’. 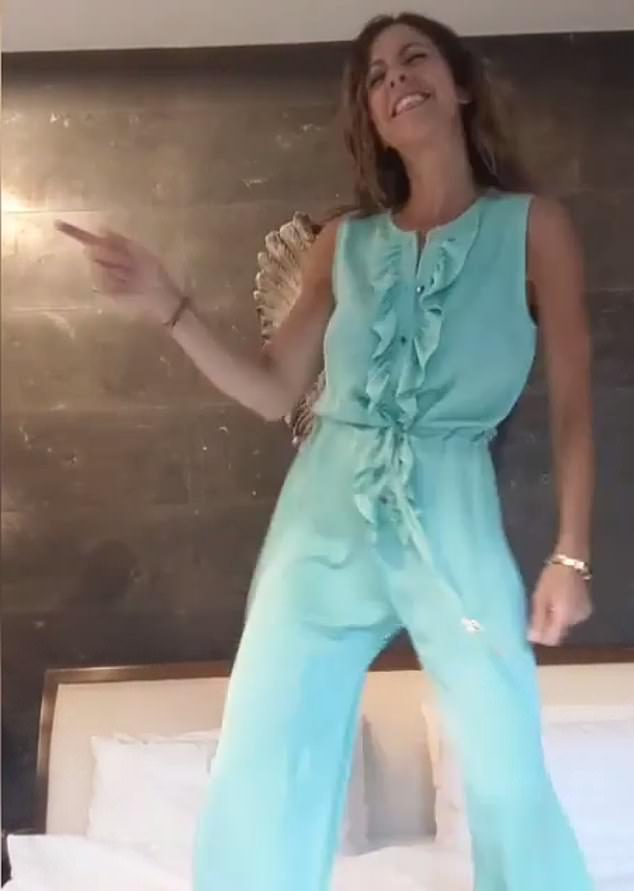 Does Tom Bradby regret his part in the rift between the Cambridges and the Sussexes? ‘I know Harry and Meghan, and William, and I found myself dragged into a maelstrom which I didn’t particularly enjoy and which was quite stressful,’ says the ITV News presenter, who became a TV confessor for the younger royals. ‘You find yourself wanting to do the right thing, which becomes very difficult because you become caught in someone else’s argument.’

Swedish model and TV presenter Ulrika Jonsson, who has confessed to drinking lots of rum during lockdown, has seen the (sober) light after abstaining for two nights. ‘Drinking is neither funny or clever,’ declares the 52-yearold. ‘Well, on reflection it is definitely both when I do it but not always the day after.’

A rather risque night with the racy baronet

It takes one to know one — a lothario that is. The death of Old Etonian baronet and ladies man Sir William Pigott-Brown elicited some colourful memories from shipping heir and socialite, Taki Theodoracopulos. In particular, he recalls taking his girlfriend (later wife) Princess Alexandra von Schoenburg-Hartenstein, for a weekend at PigottBrown’s Oxfordshire stud. ‘Alexandra and I had a slight argument on the Saturday evening, so that night we slept back to back in the double bed,’ Taki tells me. At breakfast the following morning, Pigott-Brown and two of his male guests were in a disagreeable mood. ‘They were booing me,’ remembers Taki. ‘They said, “You weren’t very entertaining last night. You don’t know the form, do you?”’ Gradually, the truth emerged: one wall in the bedroom he and Alexandra occupied was not quite what it had seemed. ‘It was a twoway mirror. That was my initiation into the morality of Sir William Pigott-Brown.’