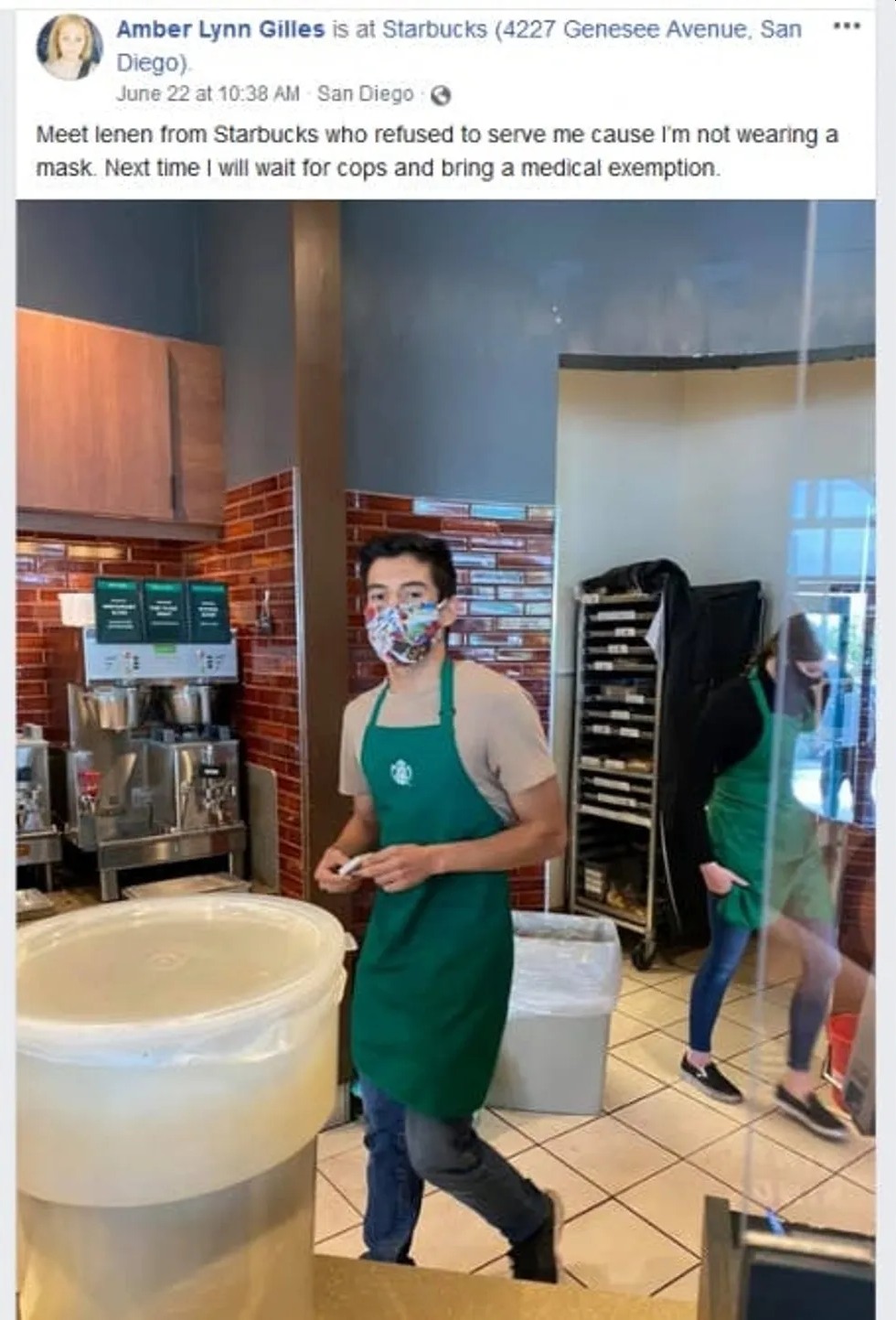 We didn’t even cover half of all of the Karen Eruptions over the past three months. Karens have really been feeling themselves this year, and honestly, I believe some of these cases are just sad, pathetic morons desperate for attention. So it is with this woman, Amber Lynn Gilles, aka one of the first Starbucks Karens. Different Karens were caught at Starbucks instigating sh-t, but Amber Lynn was a special case. She went to a San Diego Starbucks without a mask and a barista named Lenin Gutierrez refused to serve her. So she took his photo and put on Facebook to whine about him. What happened next is one of the reasons why the internet can stay: people felt bad for Lenin and someone started a GoFundMe as a “virtual tip jar” to raise $20,000 for Lenin. The page has now raised over $100K. And Amber Lynn wants half of it.

The San Diego woman who berated a Starbucks barista online last month after she refused to wear a mask inside is now saying she deserves over half the $100,000 raised for the employee, according to local news outlet KGTV. Lenin Gutierrez, a Starbucks barista, refused to serve Amber Lynn Gilles last month because Gilles did not have a face covering on, despite California law requiring people wear masks in public.

Gilles went on to shame Gutierrez on social media, posting a photo of him on Facebook and writing, “Meet lenen [sic] from Starbucks who refused to serve me cause I’m not wearing a mask. Next time I will wait for cops and bring a medical exemption.”

In response, Gutierrez received an outpour of support, and a GoFundMe campaign acting as a virtual tip jar for the barista has gone on to raise over $100,000.

However, Gilles is now demanding that half that money belongs to her for “discrimination.”

“It was discrimination and everybody is OK with it and enabling and rewarding that behavior,” she told KGTV on Tuesday. “I get shortness of breath, dizziness and it messes with the heartbeat,” she told the local news station. “And I do have asthma as well, and I do get mask-acne. So there’s several things going on and not only that but it doesn’t even work.”

KGTV reported that Gilles provided two documents to the outlet to prove her exemption. The first was a pelvic exam from 2015, with results that say “probable exophytic fibroid arising from the anterior wall of the uterus measuring 2.9 cm size,” and “simple 2.5 cm left ovarian cys.” The second document was a handwritten note on letterhead from a local chiropractor, who claimed that Gilles “has underlying breath conditions that prevent her from wearing a mask or any type of facial covering whatsoever.” The identity of Gilles’ chiropractor was not shared. Gilles defended using a note from a chiropractor for a breathing-related medical exemption, telling KGTV, “They are dedicated to providing non-invasive personalized care and treatment. They are real doctors.”

Gilles, who is reportedly looking to start her own GoFundMe to raise money for legal fees should she decide to sue, said that she has no remorse for the Starbucks incident. “No absolutely not. I feel like I need the apology,” she said. “I’ve been discriminated against, I’m the one who’s sick.”

THE DOCTORS’ NOTES!!!! LMAO. I mean, I was thinking this bitch was a crisis actor looking for attention, but then I watched the little clips of her in the video below, and now I think she’s A) a complete idiot and B) looking for attention. She’s not being used by MAGA operatives, she’s just really this f–king stupid. She took something really nice – people celebrating a barista for enforcing mask laws – and turned it into her narcissistic a–hole drama. I keep wondering… how do these Karens even *function* in life? They’re dangerously stupid. 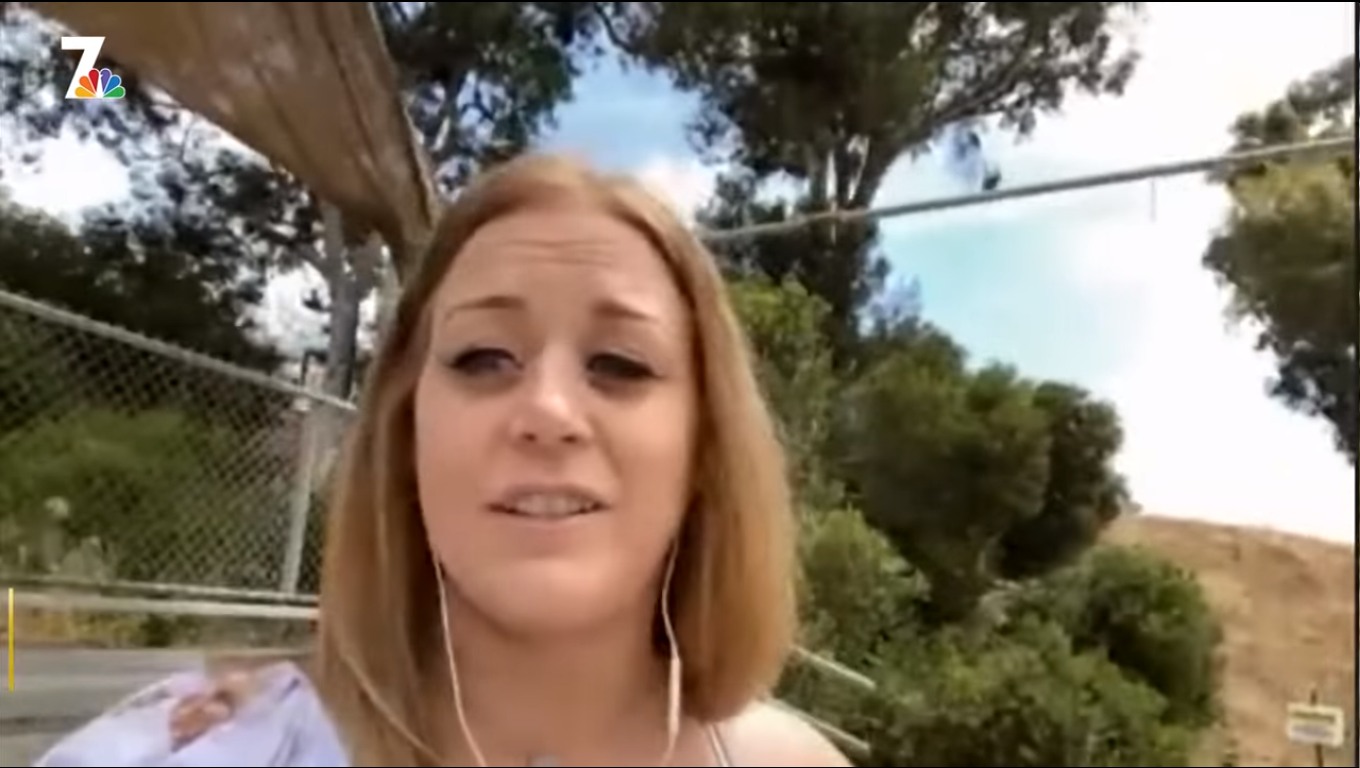