In late April, Caitlyn Jenner announced her plans to run for governor of California, asking citizens to vote for her to replace current governor Gavin Newsom. But shortly after announcing her bid, Caitlyn landed herself in hot water, per TMZ. Speaking to the outlet about her view on allowing transgender athletes to compete in girls’ sports, the gold medalist revealed that she’s opposed to the idea. “I oppose biological boys who are trans competing in girls’ sports in school,” she shared. “It just isn’t fair. And we have to protect girls’ sports in our schools.” Twitter had lots to say in response, with other celebrities calling out the star. In the months since, Caitlyn’s stances on other political topics have only caused further uproar.

But Caitlyn’s controversial comments aren’t the only thing raising eyebrows about her gubernatorial campaign — the celebrity is reportedly over $150,000 in debt, after having spent roughly $910,000 of the $747,000 she raised, according to Politico. And in September, she made another headline-making statement in regards to her gubernatorial run, but this time it was about her famous family. So, what did she have to say? 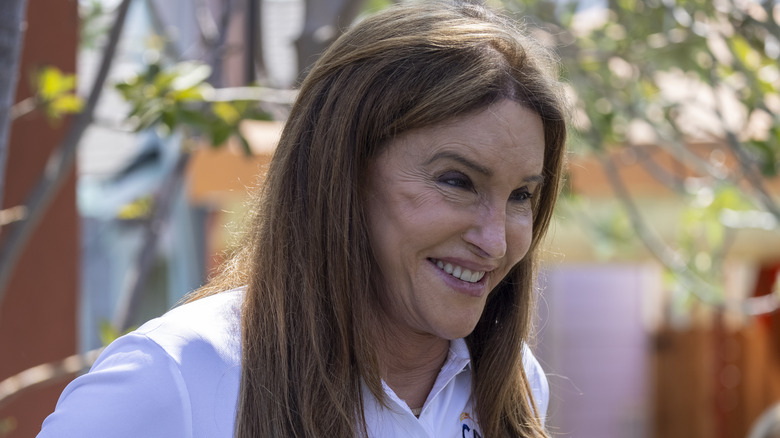 Since Caitlyn Jenner launched her political campaign, her brood of children and stepchildren haven’t spoken out in support of the athlete-turned-politican. It turns out there’s a good reason for this: she asked them not to! The former “Keeping Up with the Kardashians” star opened up on the “California Rebel Base” podcast about her worries that her conservative leanings could damage the KarJenner brand. “I called up each one of them and said, ‘Hey, this is what I’m looking to do,’ and I said, ‘I want you guys out of it,'” Caitlyn told podcast host Steve Hilton (via the Daily Mail). “You know, politics can be a dirty business and they have brands, they have all the other things that they’re doing,” she added. “[I told them] I don’t want you involved, I don’t want one dime, I don’t want one tweet, one Instagram post. I said ‘just stay out of it.'”

This statement tracks with earlier comments Caitlyn made on the set of “CBS This Morning” back in May, when she was adamant about separating her family from her political ambitions. “I did speak with all my children and I said, ‘Hey, I do not want one tweet … this is my deal,'” she said. This thinking could explain why her son Brody Jenner has been “avoiding” questions about the campaign. And since the big news on the KarJenner front is Kylie’s pregnancy announcement, it would seem the family has taken Caitlyn’s words to heart.