The Kardashian-Jenners are always being accused of trying to look like other people. Seriously, they’ve tried it with Beyoncé, Aaliyah, Gwen Stefani, Rihanna, Elizabeth Taylor in blackface (IDK either, y’all!), Naomi Campbell, Kylie’s own friend Heather Sanders, and Rihanna, again. Now, Kylie Jenner is being accused of trying to look like Beyoncé or “Beyoncé’s tethered” if we were in Jordan Peele’s cinematic universe and all had a creepy doppelgänger living in the underworld.

Before this incident, Kim Kardashian was accused of trying to look like Queen Bey, but this time, Kylie’s Instagram is being called into question. Yesterday, Kylie posted a series of photos of her with wavy bronde hair and a floor-length green leopard print dress, calling it “baby mama drama” chic. 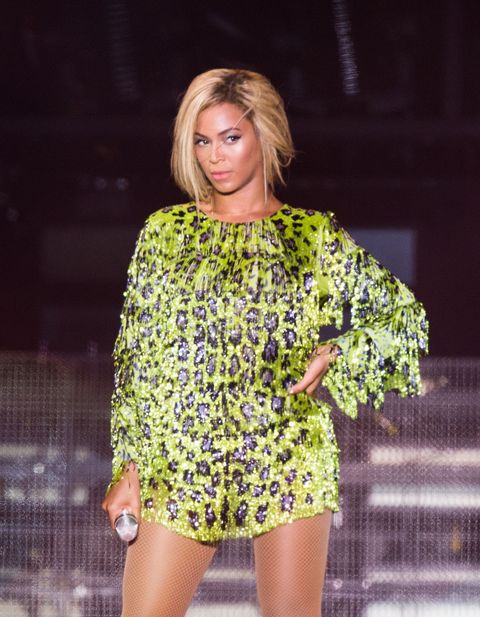 And if you look closer, Kylie’s face and makeup does look strikingly similar to Beyoncé’s. Or, according to some Twitter and Instagram users, she looks like “Beyoncé’s tethered” or Khloé Kardashian trying to look like Beyoncé or the secret imaginary third Knowles sister, Kylie Knowles.

Understandably, the Beyhive is experiencing a range of emotions as a result of this new information.

I thought Kylie was Beyonce in one of those new pics pic.twitter.com/F6ZzbD2dN0

Y’all will never convince me that Kylie Jenner looks like Beyoncé Giselle knowles – Carter. On a good day with hella make up or bad. She can be in a Beyoncé costume and I won’t jack it. You bitches is wild and disrespectful. pic.twitter.com/ddYfICv8gR

Kylie Jenner really asked her doctors to give her that beyonce smh https://t.co/qPvMNZRpBL pic.twitter.com/con4VPV3lz

why is kylie dressed as khloe cosplaying as Beyoncé pic.twitter.com/G1Pu4K8o1G

Now why Kylie took some of Beyoncé’s face like that? pic.twitter.com/ys002gB7gG

The accused has not commented on the matter, but perhaps she will upload a video of her toes and address it later? Time will tell…

In the meantime, please settle this debate: