You can protest. You can donate to organizations, like the Minnesota Freedom Fund, George Floyd Memorial Fund, and Black Visions Collective. You can call your representatives. You can read books and articles and educate yourself. In the wake of George Floyd’s death and the nationwide protests calling for justice and an end to police brutality, these are just a handful of ways you can take action in support of the Black Lives Matter movement and the Black community right now. Supporting Black-owned businesses is another way to support your POC allies.

Amid the pandemic, “the number of working African American business owners in the United States plummeted more than 40 percent,” the Washington Post recently reported. They add that that figure is a “far-steeper drop that other racial groups experienced.” And CBS News reported in April that approximately 95 percent of Black-owned businesses were excluded from the $3 trillion economic stimulus package passed by Congress in an effort to support communities through the pandemic. So, if you’re able, why not put your dollars toward both local and national Black-owned brands

Ahead, we’ve gathered 15 Black-owned food brands, some of which also give back to nonprofits.

This month’s theme – ✨Caribbean Pantry Essentials!✨ And in this month’s box we present some of the essentials for a well-stocked Caribbean pantry. We know that it has been a challenging time with grocery shopping during quarantine, with some of us still experiencing long lines and empty shelves. So in this month’s Caribbean Pantry Essentials Box we’ve put together some of those Caribbean ingredients that you’ll need during this time, delivered straight to your door. From seasonings and spices to condiments, we know that great Caribbean meals start with great ingredients! 1-time boxes also available. Tap to shop or visit our website | www.callaloobox.com Delivering the taste of home to your doorstep ??? #trinbagopantryessntials #trinipantryessntials #caribbeanpantryessentials #trinbagofood #trinifood #caribbeanfood #macaroni #triniketchup #maubybark #currypowder #geerapowder #biscuits #shirleybiscuits #coconutoil #peppersauce #bertiespeppersauce #greenseasoning #allpurposeseasoning #cookupseasoning #chickenseasoning #fishseasoning #coconutmilk #coconutmilkpowder #callaloobox #callaloogrocery #callaloogrocerybox

Founded in 2017, the Callaloo Box is a subscription box featuring the flavors of the Caribbean. In the box, you’ll find seasonings, condiments, hot sauces, beverages, and more. They also have a snack shop, where you can buy products a la carte.

I love food, I love to eat but after gaining weight and reaching my highest weight at almost 192 lbs I decided it was time for a change. . . Once you hit 40, food just metabolizes differently (not in a good way), nutrition needs especially for me as a woman became a lot more specific. I had to start thinking about getting older and what my health goals should be. . . This is why my company Iya Foods is so personal to me. We offer real food flours, spices & seasonings, vegetable powders & more that will nourish you and help you reach your health and body goals. . . Our foods have worked for me personally – I lost 8.8 lbs in my 1st 4 weeks including the holidays. I was going for 5 lbs ? . . 2020 – I am inviting you to join me, let’s get healthier together. Watch out for our next post for more details.

Spice and sauce aficionados will love Iya Foods, which sells everything from flours and baking mixes and spices and seasonings to dried hibiscus flowers and whole-food powders. Founded in 2015, Iya Foods not only promotes nourishing African-inspired ingredients but also supports job creation via buying local when possible and sourcing from growers who use environmentally responsible methods.

Teff is a naturally gluten-free, nutrient-packed ancient grain discovered more than 10,000 years ago in the Ethiopian Highlands. Thanks to entrepreneur couple, Ermeyes and Betlehim, you can order this versatile grain and get it delivered directly to your home. Berhan Grains’ website also boasts plenty of recipes that use the grain, from pancakes and cookies to pizzas and bread. Founded in 1992 in Columbus, OH, Glory Foods is your go-to for Southern-style veggies, including green beans, black eye peas, and more. They also sell hot sauce, fruits, and muffin mixes. Use Glory Foods’ store locator to find their products near you.

We took to the @cakebakesweets stage with so many beautiful faces in the crowd. . . It was such an #AMAZING experience for us. Looking forward to the ? reopening and doing it again! . . #SouthernGirlDesserts #TBT

Coleman and Robinson combined their family recipes to create Los Angeles, CA-based Southern Girl Desserts. If you’re in the area, you can get their mouthwatering cupcakes, cakes, pies, cookies, and more delivered directly to your doorstep. Those who aren’t in the area, though, don’t fret; you can get their sweet potato bundt cake, pecan pie, and sweet potato pie shipped to your home.

Ugh if only this was scratch n sniff ????????????? Luckily, you can order our Cherry CocoMallow Sandwich online and add us to your #socialdistancing favs ??? ⬆️⬆️⬆️ Click the link ?

Sweet Dames Artisan Confection is Drayton’s homage to the Bahamian coconut sweets she used to eat as a kid. On her website, you can order macaroon bites in various flavors, like pineapple coconut, salted caramel coconut, and chocolate-dipped coconut. But it’s her Cherry Jubilee CocoMallow Sandwiches we highly recommend trying. 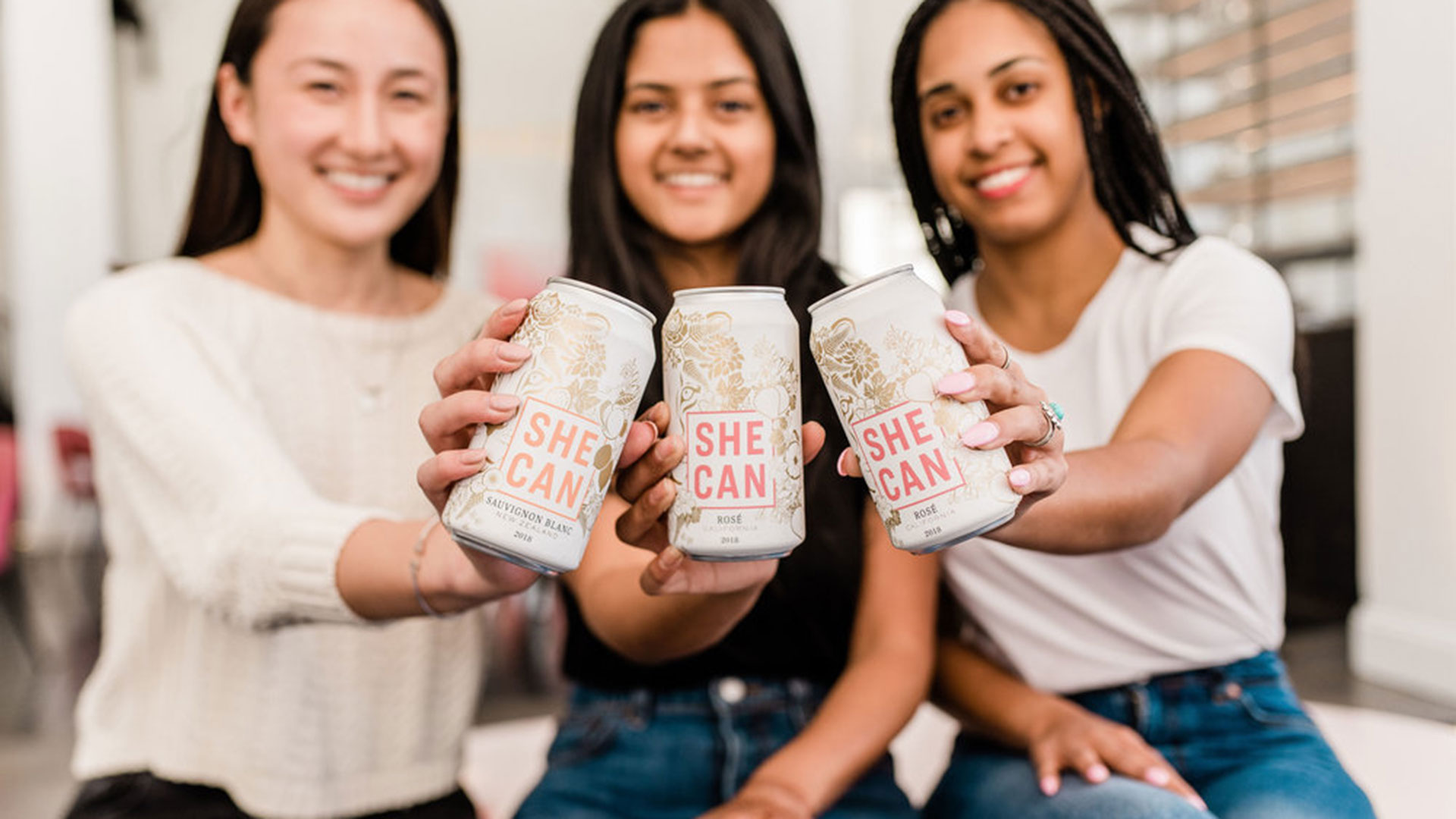 California-based McBride Sisters is the largest African-American-owned wine company in the country. Not only do they have seven different wines from which to choose, but McBride Sisters also sells a canned wine called SHE CAN, which promotes the professional advancement of women in the wine industry. And so far, they’ve awarded nearly $40K in scholarships to women.

The gang’s all here ??? shop the Superfood Latte Blends now at golde.co!

Founded in 2017, Golde is an independent, Brooklyn-based brand that makes superfood-boosted health and beauty products, including an organic turmeric latte blend, a superfood latte kit, and more.

Our OG flavor (now in crunchy + soft baked) would be nothin' without the chips. Happy #NationalChocolateChipDay! ?⁣ To celebrate, let's #snack. For 24 hours only, we are offering 20% off our #softbaked + #crunchy chocolate chip cookies via partakefoods.com. Use code CHIPPY2020 at checkout!⁣ #linkinbio

It's Monday. You’re working from home again and you ran out of wine. Grab a spoon, sanaía lovers. This is a 3 cup kind of night. ??‍♀️???

On Shark Tank, Jeremie proved applesauce is not just for kids. Available at Walmart in flavors such as guava, lavender pear, blackberry, ginger, and tamarind, Sanaía applesauce is made with green apples versus red varieties. “We also include actual wedges of baked apples in every jar and our flavors are authentically island-inspired,” Jeremie tells Black Enterprise. You can find Sanaía in more than 500 Walmart locations on the east coast. If you haven’t had Capital City‘s mambo sauce, you better order some stat. Since it was founded in 2011, the Washington, D.C.-based company’s mambo sauces, which include mild and sweet-hot, has amassed a cult-like following, and people use it everything from wings to fries. And once you try it, it’ll become a staple in your kitchen, too.

You can order BLK & Bold online from @target, @wholefoods, or our site! Thank you @afro.tech for naming us as five Black-owner brands to put onto your grocery list! We’re in good company. Make sure to add @partakefoods, @michelesyrup, @capitalcityco, and @heritagelinkbrands to your rotation as well. ✊?✊?✊?

When you purchase a bag of specialty coffee from BLK & Bold, you’re not only supporting the Iowa-based coffee and tea company, but you’re also supporting the initiatives they’ve aligned themselves with, including nonprofits aimed at supporting youth in need.

For a high-quality, organic, fair trade cup of tea, Brooklyn Tea has just what you need — and then some. Their best-sellers include unique flavors such as cucumber melon green, cream earl grey, Kyoto cherry rose sencha, and more.

SWEET LOVERS: your last chance to signup for our June 3rd “Virtual Wine Tasting” dedicated to you! Go to www.LoveCorkScrew.com “Virtual Events” NOW for your wine to arrive at your doorstep! #LoveCorkScrew®️

Love Cork Screw is about more than just wine — though, all six of their vegan wines are pretty great. They also sell wine-scented body butter, apparel, candles, and more.