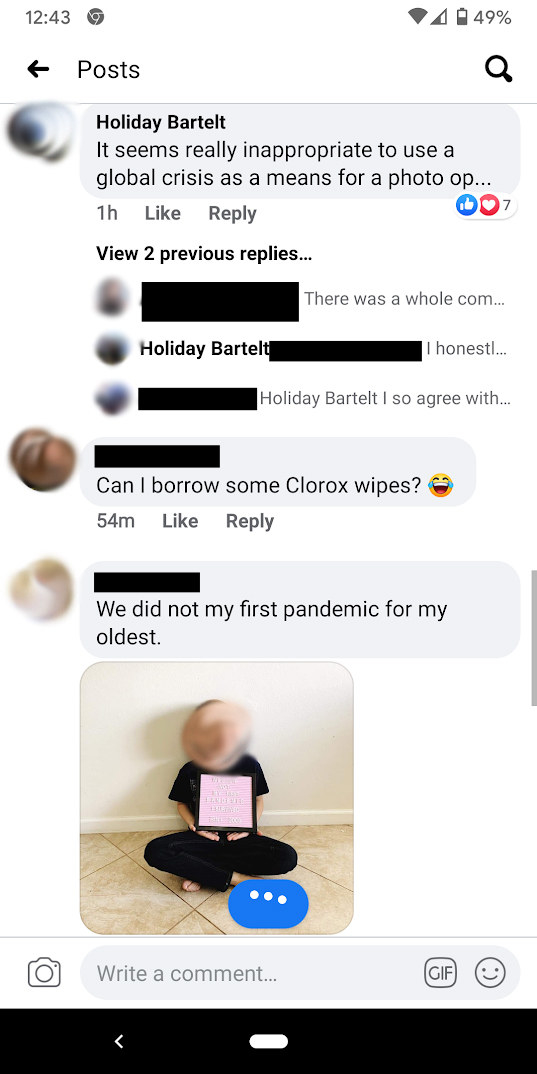 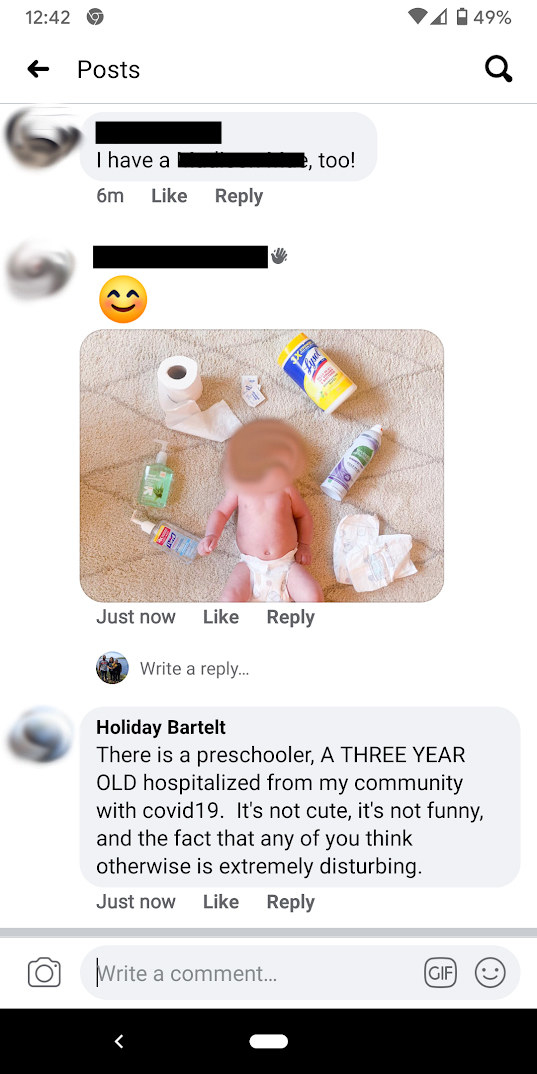 A woman said she was booted out of a mom Facebook group after challenging those who shared photo shoots of their newborns and children with signs that read “My First Pandemic.” Things then got heated.

Exclusive Pumping Mamas is a group created for women “to discuss feeding pumped/expressed breastmilk through bottles,” its page description reads. The closed group currently has over 30,000 members.

Holiday Bartelt, a 31-year-old mother who lives in Elgin, Illinois, told BuzzFeed News she believes she was blocked from the group “for disagreeing [with using] a global crisis as a photo op with babies.”

“An infant in Chicago has died by COVID-19 now … Is it still cute?” she asked. She was referring to the death of a 9-month old child in Cook County, the first reported infant death in the US connected to the virus. “I pray these women don’t feel that pain.”

Bartelt said she started noticing more and more of these kinds of photo shoots being shared by mothers on social media over the past week, and was baffled.

“I honestly didn’t understand why people were making these pictures,” she said. “I’ve never seen anything like this before.”

“My neighbor recently alerted me that she is suspected of having COVID-19. She has three young children that she can’t see, a husband she can’t hug, two little pups she can’t even pet. All because she was instructed to self quarantine herself,” said Bartelt. “That hit too close to home.”

So, she felt the need to say something.

At first, she simply commented that she found the photos of cute kids propped next to toilet paper, Lysol bottles, and Clorox wipes to be “inappropriate.” However, things quickly escalated.

At one point, according to Bartelt, she challenged a woman who posted her child’s photo shoot with a sign that read “Not my first pandemic, survived H1N1 2009.” She then facetiously “asked her if [her child] hadn’t survived if she would have posted a picture of him in a coffin.”

When reached, the admin and founder of the group, Amanda Glenn, confirmed that Bartelt was in fact kicked out — however not for sharing her thoughts, but for “being rude.”

“The default response when someone is rude to one of us is usually to kick them out and block them because we strive to keep the group positive,” Glenn told BuzzFeed News.

Glenn added that she agrees the photos are “not in the best taste,” and that she and other admin and moderators have started “declining posts with pandemic pics as of this past weekend.” 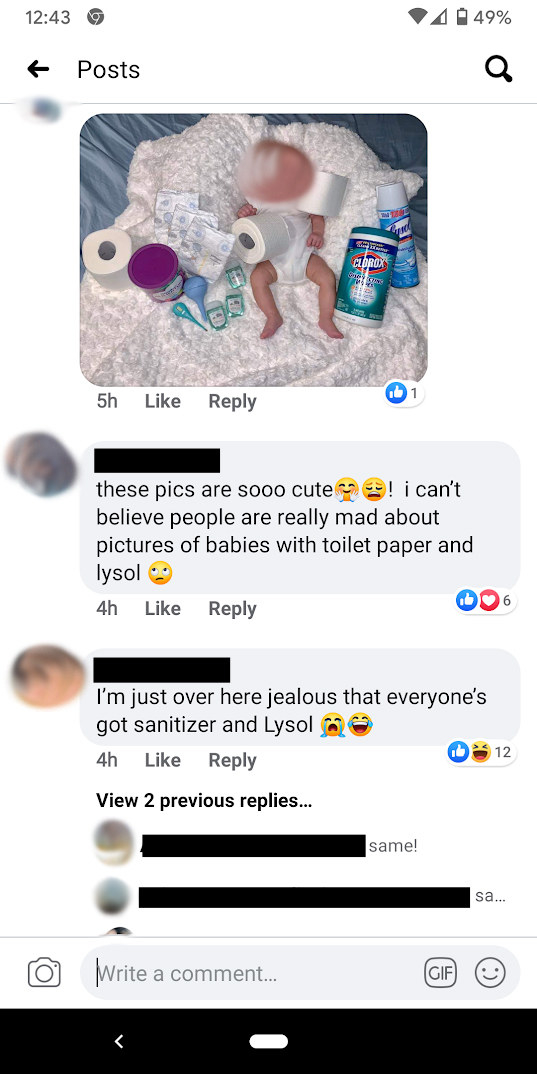 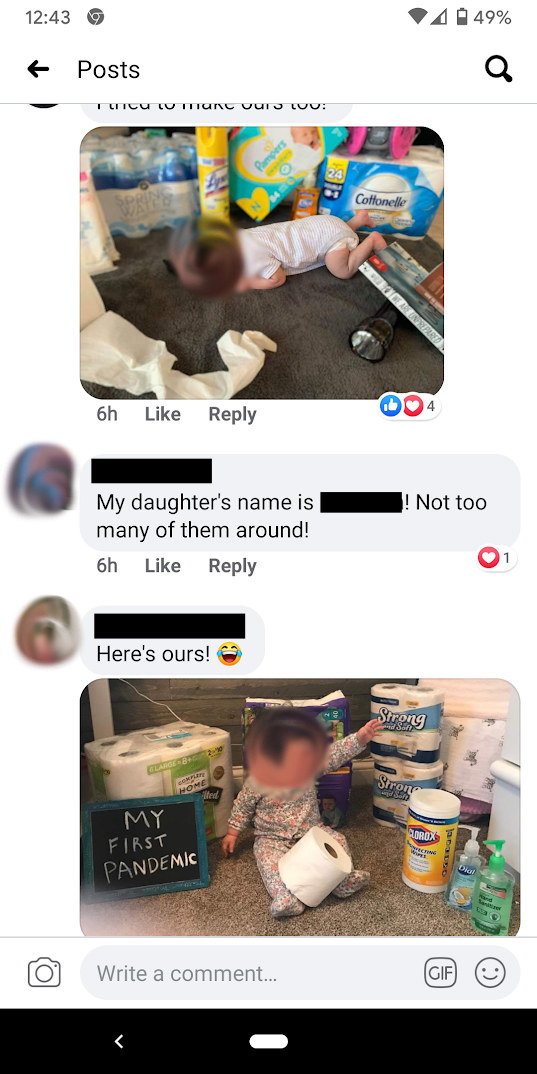 BuzzFeed News has also reached out to the other admin and moderators of the Exclusive Pumping Mamas page.

Bartelt said she wasn’t notified at all by Glenn or others about what specific comment was “rude.” She was quickly blocked and can no longer see or search the page at all.

“I still stand by what I said. I know this is just my opinion and doesn’t mean much, but this is highly in poor taste when people are dying. Taking your young children and babies and turning a global crisis into a photo op is not OK,” Bartelt added.

BuzzFeed News reached out to a number of moms in the group who shared “my first pandemic” photo shoots of their babies and toddlers to ask what compelled them to share them in the first place.

One mother responded, “I shared it because it’s cute?????”

She then told BuzzFeed News that Bartelt leaking hers and others’ photo shoots in the group is a “huge violation of privacy” because the group moderates who can join. “So, you guys are weirdos,” she added.

On Monday, an admin named Lisa Neumann, who BuzzFeed News contacted as well, wrote a message to all of its members alerting them to the situation. She stated that Exclusive Pumping Mamas will not approve, has deleted, all cutesy baby pandemic photos “to avoid any further upset.”

Bartelt maintains that her expressions of anger and distaste for the photos are justified, especially during these times.

“I would hope that others would be empathetic to those suffering,” she said. “This isn’t something to look back on and giggle about.”