Yonks back, TFF took a lot of flak for saying the bleeding obvious: that of course Muhammad Ali was brain-damaged. No matter how much we loved him – and I was somewhere near the front of the queue in that regard – it was simply ludicrous to claim, as so many did, that it was nothing to do with boxing.

Yes, yes, yes, they said, he did spend 20 years being hit in the head by some of the hardest hitters on the planet, but the slurred words and all the rest is just a coincidence! Far from being brain-damaged, they told us, Ali, as the most famous man on the planet, had just withdrawn inside himself to get a little peace. Or, in fact, it was the pesticide that was being used on the garden at the Mexican training camp he went to. Or, Parkinson’s disease could hit anyone! It just happened to happen to Ali. 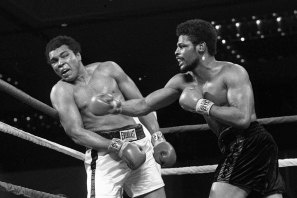 Muhammad Ali is stunned by a right cross from Leon Spinks in Las Vegas in 1978.Credit:AP

Um, no. Many of us of a certain age loved the Rumble in the Jungle with Ali up against George Foreman, the Thriller in Manila with Joe Frazier, and all the rest but how were we so naïve as to think that suffering that level of punishment for so long could do anything other than cause brain damage.

I raise it now because of the slew of recent cases where footballers at remarkably young ages are known to be suffering things such as Alzheimer’s and Parkinson’s. Time and again we see careful language used about how it could be just one of those things, not too much should be read into it, and no-one should jump to any conclusions.

Yup. But bring it in tight. While there is indeed no guarantee that their brain conditions are a direct result of playing hard, vicious, top-level football for a decade and more at the top level, it would be a HELLUVA co-incidence, don’t you think, that so many who did engage in those activities got precisely the conditions they did?

It would be the moral equivalent of a long-time smoker dying of lung cancer and claiming that it had nothing to do with the bungers. It does happen, but so rarely it is barely worth mentioning.

I repeat, none of this is to say football should be shut down. It just says there is a very good reason the concussion protocols have been put in place, and those footballers being institutionalised at an early age should serve as an example of what can happen if you don’t get it right.

Unaccustomed as I am, it seems most TFF readers agreed with my published view last Saturday that golf should demonstrate its inclusiveness and allow Tiger Woods – now clearly struggling with a disability – to use a golf buggy. What has become clear since is that if they don’t, Woods will end up being lost to them.

Look at it. His first major in 10 years is now no less than three years ago, and that was before his car accident last year. Yes, he competed well in the Masters over the first two days, until the pain in his legs caught up with him. Much the same happened last week in the PGA where he withdrew after three rounds – which really does look like the beginning of the end unless they let him use a buggy.

As you’ll recall, from 2000 to 2008 he reeled off no fewer than a 12 majors and seemed to be on course to crush Jack Nicklaus’s record of 18 majors – only to be crushed by his own hubris. Then he returned, of course, and it really was a wonderful story of redemption, as he discovered humility and made a comeback for the ages – only for it to now look as if it is shot to pieces once more.

Rugby’s resuscitation in Australia continues. Not only is it hosting the men and women’s World Cups before the end of the decade, but the interest in the coming English tour is massive. TFF did a bit of light palling around with Rugby Australia chair Hamish McLennan on Friday and he tells me that while both the Sydney and Brisbane Tests are well on their way to being sell-outs, Perth is also on track to at least fill most of the 60,000-seat stadium.

“I’m thrilled for the fans, players and the game,” McLennan says. “Rugby is starting to rock ‘n’ roll”.

All we need now is at least a couple of WINS to send Eddie back to – if not where he came from, at least to – where he went to!

At a time when, as discussed, Australian sportspeople have been covering themselves in glory, saying what needs to be said and getting elected for their trouble, let’s hear it from three-time NBA championship-winning coach Steve Kerr of Golden State Warriors fame, who at a press conference immediately after the shooting tragedy in Texas which killed 22 people, of whom 19 were children, refused to discuss basketball and instead said what needed to be said.

“In the last 10 days we’ve had elderly black people killed in a supermarket in Buffalo and Asian churchgoers killed in Southern California, and now we have children murdered at school. When are we gonna do something? We’re gonna go play a basketball game, and 50 senators in Washington are going to hold us hostage.

“I ask you, Mitch McConnell . . . are you going to put your own desire for power ahead of the lives of our children and our elderly and our churchgoers? Because that’s what it looks like.”

Bravo. He is wasted on sport, and should be one of the senators for California.

TFF was honoured this week to be asked to be the patron for Free The Hounds, a greyhound welfare advocacy group based in Western Australia. Among other things they are petitioning the McGowan government to ban greyhound racing and, more immediately, remove it from the imminent sale of the TAB. The sport, as you know, is not a sport but an industry that kills dogs, and you can sign their petition here: Free the Hounds Petition. Thank you!

Australian Jordan Thompson on playing against 35-year-old Rafael Nadal at the French Open: “I remember looking up at my camp and said, ‘I’ve hit one of the biggest forehands I’ve hit’. It came back. I hit a drive volley, it came back even harder and I wasn’t even close to the ball.” Nadal won 6-2, 6-2, 6-2.

Thompson on his first point against Nadal at Roland Garros: “I thought I was in trouble going out there and then, after that first point, I don’t know how I won it, but I was thinking, ‘Shit. That’s what I’ve got to do to win a point?’.”

Golden State Warriors coach Steve Kerr on the shooting in Uvalde, Texas, just before their play-off game: “I’m fed up. I’ve had enough. We can’t get numb to this. We can’t sit here and just read about it and go, well, let’s go have a moment of silence. It’s pathetic. I’ve had enough.”

Swimmer Kyle Chalmers: ”I need to look after my mental health and get myself right as I prepare for a massive year in the pool. The negative media attention surrounding my decision to compete at worlds and the made up storylines surrounding my personal life have been more than I can handle. After giving my all to the sport and being so welcoming to the media all my career, it’s a shame to see them publish storylines questioning my integrity all for the sake of extra clicks and money.” Goodness. I gather it is something to do with Cody Simpson.

Graham Annesley on the NRL bunker making mistakes: “If we got rid of the bunker altogether, could you imagine referees trying to rule on some of these acrobatic tries that are scored in the corner? It’s almost impossible with the naked eye to do that.”

Lindsay Collins on teammate Jared Waerea-Hargreaves being fined for swearing: “What other job do you get where you’re fined $1800 for saying the ‘f-word’. If it was me that’d be a tough pill to swallow.”

Tiger Woods after a third-round 79 at the US PGA: “I couldn’t get off the bogey train there, or other train too. I just didn’t do anything right. I didn’t hit many good shots. Consequently, I ended up with a pretty high score.”

Jurgen Klopp, manager of Liverpool, after their hopes for the league title were dashed on the final day, despite a 3-1 victory over the Wolverhampton Wanderers: “If you want to win big, you have to be ready to lose big. That’s what we did today.”

Team of the Week

Senator David Pocock. Yes, yes, yes, you’re right. It’s not yet official. But I just like writing it, and saying it. And it will be official next week! 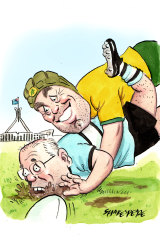 Western United and Melbourne City. Two Victorian teams meet in Saturday night’s A-League grand final. Serious question. Did you even know the A-League comp was on? Without being unkind, the whole thing seems to be at an extraordinarily low ebb, yes?

Ellie Carpenter. Unfortunately was stretchered off with a bad injury but her Lyon team won the women’s European Champions League

Justin Thomas. Fought back from seven shots back at the start of the day to win the PGA Championship.

Liverpool and Real Madrid. Meet in Sunday morning’s Champions League final, which I gather is a big deal.