While Australia pursues a “forever partnership” to build nuclear-powered submarines with its traditional allies, a bipartisan parliamentary inquiry has urged the government to deepen its diplomatic engagement in south-east Asia to navigate the growing tensions between the United States and China.

In the face of Beijing’s growing aggression in the South China Sea and the Taiwan Strait, Australia is looking to forge new partnerships such as the AUKUS military pact with the United States and Britain, and the “Quad” grouping with the US, India and Japan. 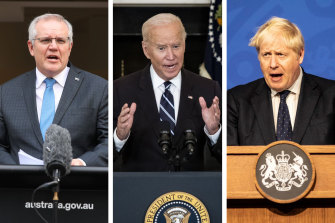 But the emergence of these groups has alarmed some south-east Asian nations who are concerned the power of their key decision-making body – the Association of Southeast Asian Nations (ASEAN) – is being curtailed.

The AUKUS agreement also infuriated the French government, which on Wednesday announced it was sending its ambassador to Australia back to Canberra following a bitter dispute over the scrapping of a $90 billion submarine construction contract with the country.

A new report tabled by the Foreign Affairs, Defence and Trade References Committee, which includes Liberal and Labor MPs, has called on the government to deepen cooperation with south-east Asian nations and to “remain fully engaged with ASEAN”.

ASEAN is regularly criticised for its lack of effective action in dealing with challenges in the region, most notably in its response to the recent military coup in Myanmar and China’s democratic crackdowns in Hong Kong.

While it noted that some experts questioned the capacity of ASEAN as “a slow-moving, consensus-based organisation” to deal with the rising tensions in the region, the inquiry concluded Australia shares ASEAN’s agenda for a “peaceful, inclusive and resilient region of sovereign states”.

The committee’s chair, Labor senator Kimberley Kitching, said “continued investment in established groupings like ASEAN will be important, while newer security architectures like The Quad and AUKUS will also grow in prominence”.

“The Quad is a proud extension of the unity of democracies in the region. Those who make themselves our adversary know that they cannot isolate any one of us, we stand together as one, united by values and strong in coordination,” she told The Sydney Morning Herald and The Age.

The US embassy’s chargé d’affaires in Canberra, Michael Goldman, on Thursday told an Asia Society briefing the Quad was not a “NATO of the Indo-Pacific, this isn’t something that’s going to replace ASEAN”.

“It’s not a military bloc, it’s not a new sort of alignment to exclude any particular country,” he said.

Mr Goldman also said the AUKUS agreement was a “larger technology partnership” and more countries could be brought into it on a case-by-case basis.

When announcing the AUKUS military pact last month, Australian Prime Minister Scott Morrison described it as a “forever partnership, while British Prime Minister Boris Johnson said it was an agreement among “kindred” nations.

This led to a perception it was an alliance among the Anglosphere, when it was in fact an agreement to share military technology including nuclear submarine capability, long-range missiles, cyber, artificial intelligence, quantum technologies and undersea drones.

Within days Australian Ambassador to ASEAN, Will Nankervis, reassured south-east Asia that “our commitment to ASEAN centrality remains as steadfast as ever”, adding AUKUS was “not a defence alliance or pact”.

Caroline Millar, deputy secretary for national security at the Department of Prime Minister and Cabinet, said on Thursday AUKUS was not something that was in “competition” with any other international partnership.

Japan’s ambassador to Australia, Shingo Yamagami, told the inquiry he was “very optimistic about the future of ASEAN”.

”Yes, this issue we are facing in Myanmar is tremendous, but I think ASEAN comes first when it comes to addressing the issue within their region with close cooperation coming from like-minded countries, including Australia, Japan and the United States,” he said.

But Peter Jennings, executive director of the Australian Strategic Policy Institute, said ASEAN was not strong enough to deal with the threats posed by an assertive rising power in China.

Considering ASEAN’s cautious reaction to the Quad grouping, Mr Jennings said the Australian government needed to work hard to “find ways for Quad countries to cooperate with ASEAN countries, to the extent that that’s what ASEAN wants and has an interest in doing”.

The inquiry also recommended Australia continue to develop military bases in the Northern Territory to act as an “alliance hub” for the region and deepen its relationship with India directly as well as through partnerships like the Quad.