The Australian-made thriller The Invisible Man, starring The Handmaid's Tale lead Elisabeth Moss, has become the world's top-grossing film since its debut over the weekend.

Written and directed by Melbourne-born, LA-based Leigh Whannell and filmed at Fox Studios in Sydney, the movie topped the weekend box office charts in Australia, the US and in many of the other 48 territories in which it opened last week. 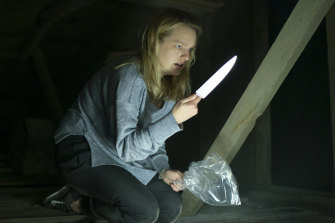 Elisabeth Moss in a scene from Leigh Whannell’s take on The Invisible Man.Credit:Universal

Made on a budget believed to be around $US9 million ($14 million), The Invisible Man took $US29 million in North America and an additional $US20.2 million in foreign territories, including $2.52 million in Australia. In the US, it displaced Sonic The Hedgehog from top spot.

Whannell, who co-created the Saw and Insidious franchises with fellow RMIT alumnus James Wan, has never abandoned his Australian roots despite enjoying enormous success in the US.

In 2018, he made the inventive sci-fi action thriller Upgrade in Melbourne. Last year he reteamed with the producers of that film, Sydney-based Goalpost Pictures and Hollywood horror specialists Blumhouse, to make his feminist update of HG Wells' sci-fi classic at Fox Studios. 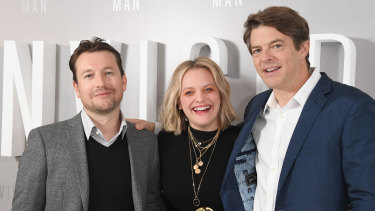 "Leigh creates movies which not only build franchises but fundamentally change the landscape of their genre," Blumhouse's Jason Blum said in a statement announcing the deal on the weekend.

The Invisible Man sits within what is known as the Universal Monsterverse, a loose grouping of characters that includes Dracula, Frankenstein, the Mummy, the Wolf Man and others. Attempts to revive this catalogue of characters, many of whom date back to the 1920s, have met with limited success.

Although Whannell has recently stated that his film is not part of any cinematic universe, it ends in such a way that you'd have to be blind not to see the potential for a franchise, or a sequel at the very least.