Australian netball’s preparations for the Commonwealth Games have been rocked with Diamonds defender Jo Weston testing positive to COVID-19.

Weston has been put into isolation at their Perth training camp for seven days while the team travels to Birmingham with their first game in a fortnight. 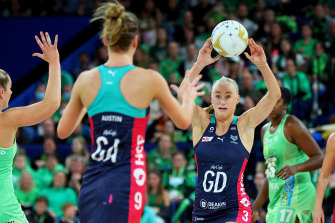 The Melbourne Vixens star will join the squad next week when her seven-day isolation period ends.

“Jo is feeling well, which is the number one priority, and she is being closely supported by her Diamonds teammates, medical staff and support staff,” said NA’s high performance manager Stacey West.

“The Diamonds athletes and support staff continue to follow robust protocols to protect their health and safety in the lead up to the Birmingham 2022 Commonwealth Games.”

The Diamonds travel to Manchester next week for a training camp ahead of the Games that get under way on July 28, looking to improve on their silver medal from 2018 when England clinched gold on the Gold Coast.

Australia’s athletes have already been banned from spectating at other venues while masks will be mandatory to limit COVID-19 transmission in Birmingham.