Bachelor fans who tuned into part two of the season 24 finale Tuesday night (a.k.a. all Bachelor fans) were pretty confused when they saw host Chris Harrison call out former contestant Kelley Flanagan at the beginning of the show. Chris told the 27 year-old lawyer from Chicago (who was a fan fave), “It’s important that you’re here” but never explained why.

Turns out, Kelley doesn’t even know. After the finale premiered, she posted a super cute pic of herself in the audience to Instagram. “That’s a wrap! What a great experience and will always be grateful for the opportunity to join season 24! ❤️,” she captioned her post.

And, judging by the tonnnns of fans’ comments, people clearly were confused by what Chris said.

“WHY WAS IT IMPORTANT THAT YOU WERE THERE KELLEY,” a fan commented, pretty much summing up what everyone was thinking.

Kelley’s response? “lol I wish I knew,” with the two hands up shrugging emoji. 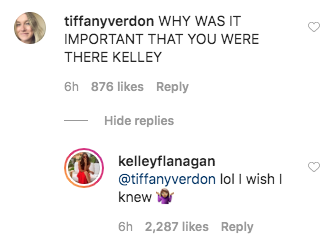 Also of interest, Barbara Weber (Peter’s mom, who has been making headlines for her comments aboutMadison Prewett) commented on Kelley’s post that she wants to get together with her.

“We need to do lunch and go shopping for the day,” she commented on Kelley’s post. To which her son’s ex-girlfriend replied, “yes please!!”

“WHYYYYYYY would they not chose you for bachelorette?!?!” one fan wrote. And another commented, “Wish you were the next Bachelorette!!!”

Oh well, maybe fans’ Kelley cravings will be satisfied if she appears on Bachelor in Paradise?