THE Bank of England has cut interest rates again to 0.1 per cent to its lowest level in 400 years.

The unprecedented move was taken to help reduce the economic shock caused by the coronavirus epidemic. 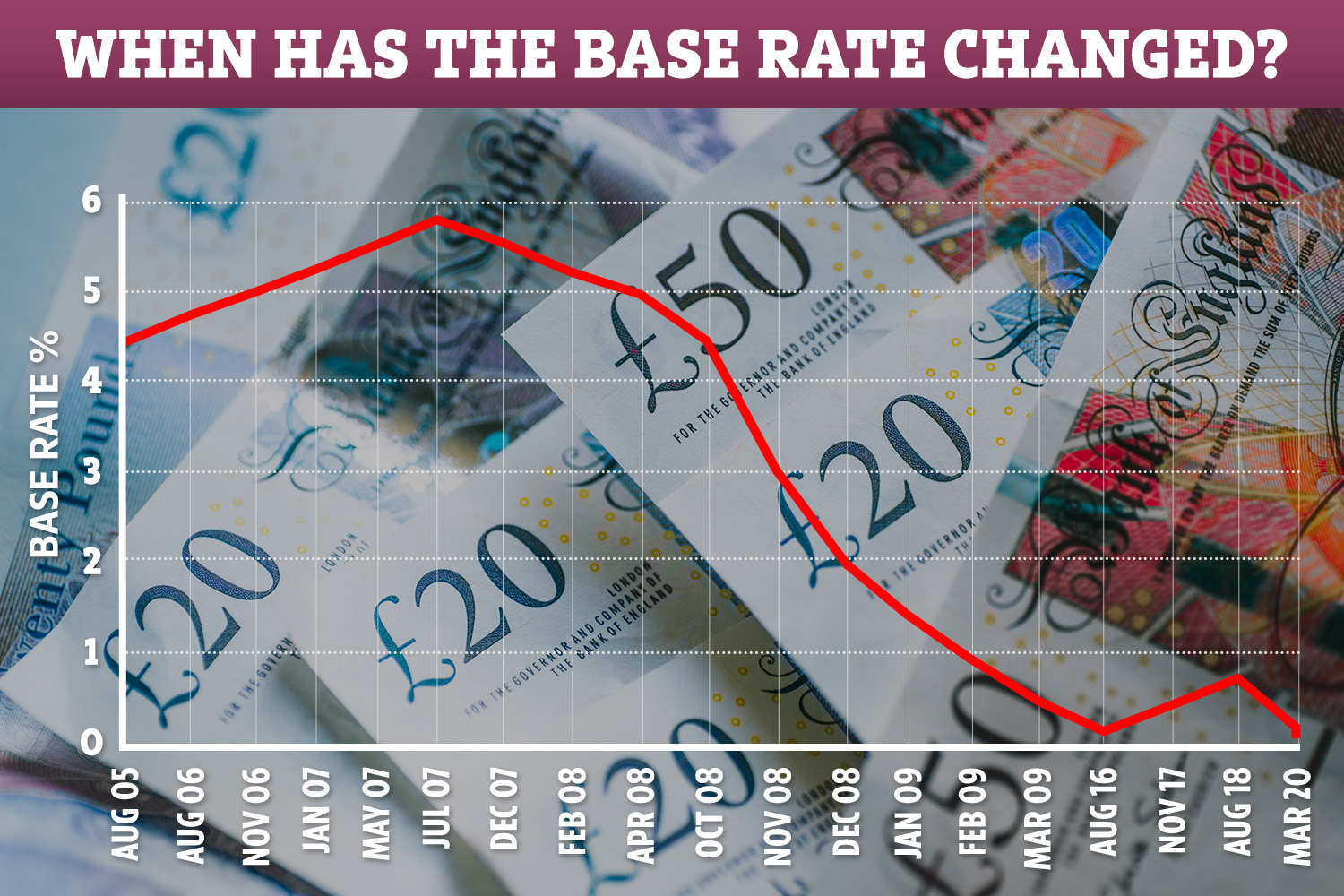 Rates were reduced just last week before the Chancellor delivered his budget.

It means the rate used by banks and lenders to set their own interest rates has dramatically dropped from 0.75 per cent to 0.25 per cent and now down to just 0.1 per cent.

The Bank of England said that financial conditions in the UK and globally have "tightened" in recent days due to weaker market conditions.

Before last week rates were last changed in August 2016.

The emergency meeting came less than a week before the MPC's next scheduled meeting on Wednesday March 25.

What is the base rate?

SIMPLY put, it’s the country’s official borrowing rate, and is the rate the Bank of England lends to all the other banks in the UK.

It is incredibly important as it a guide for lenders on what rates it can offer – and therefore impacts mortgage rates, credit cards, loans and savings.

It was stuck at record low levels for a decade because of the state of the economy after the financial crash in 2008.

It was raised back to 0.5 per cent last November, the first of what many had hoped would be three hikes within three years.

The rate went up again in August 2018 to 0.75 per cent and has been held there ever since until last week.

Today's shock announcement means it's now below a level not seen since before 2016.

If banks and building societies pass these on to consumers, it could be good news for borrowers, such as homeowners, who may see interest rates on loans drop.

But it means savers will also see the amount paid on their nest eggs weaken.

Those on tracker and variable rate mortgages will feel the effect on bills as soon as their bank drops the rate inline with the base rate.

Unfortunately, those on a fixed-rate deal won't feel the benefit until their deal comes to an end and they take out a new one.

In a statement, the central bank said: "Over recent days, and in common with a number of other advanced economy bond markets, conditions in the UK gilt market have deteriorated as investors have sought shorter-dated instruments that are closer substitutes for highly liquid central bank reserves. 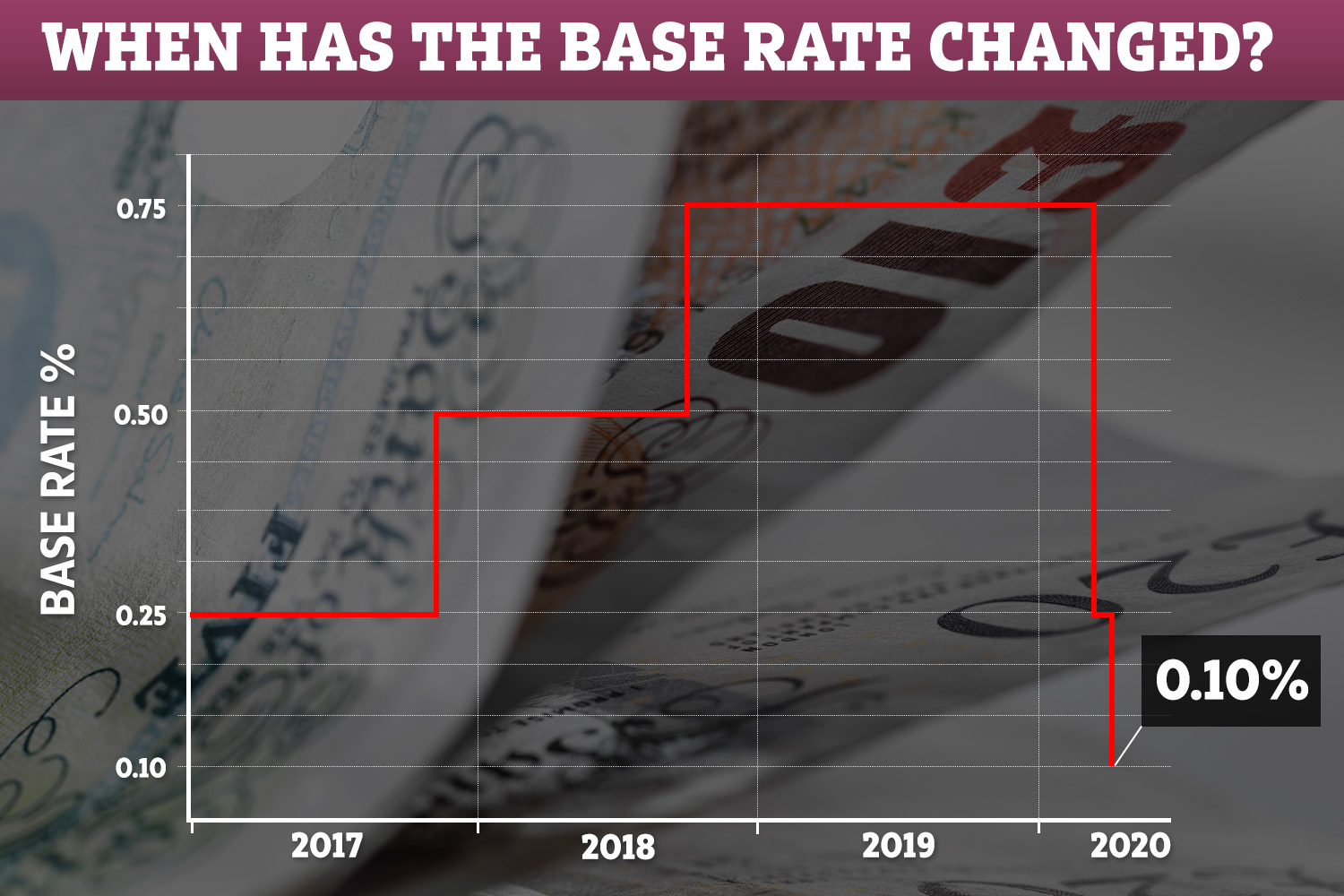 "At its special meeting on 19 March, the MPC judged that a further package of measures was warranted to meet its statutory objectives.

"It therefore voted unanimously to increase the Bank of England's holdings of UK government bonds and sterling non-financial investment-grade corporate bonds by £200 billion to a total of £645 billion, financed by the issuance of central bank reserves, and to reduce Bank Rate by 15 basis points to 0.1 per cent."

Adrian Lowcock, head of personal investing at Willis Owen, an investment platform in the UK, said: “There is little the Bank of England can actually do to support the immediate crisis as interest rates are already at record low levels and any cuts now will take time to feed into the economy.

“This is more bad news for savers as cash savings rates are already so low."

Jeremy Thomson Cook, chief economist at Equals said: “The base rate is now at the lowest level we think the Bank of England is prepared to go to and with that will come a not so unsubtle hand-off of the stimulus baton to the Treasury."

"Lower rates and additional quantitative easing can keep markets satisfied and borrowing costs for both businesses and the government.

“Sterling is higher on the day following the announcement having endured its fifth worst day of the century against the USD yesterday.”

The US made the dramatic decision to slash the Federal Reserve Bank's rate by 0.5 per cent last week.