Concerned nature lovers are being urged to stay away from baby birds that appear to be stranded on the ground this summer.

The RSPB says fledglings often spend several days on the ground after leaving the nest, but humans may think the birds have been abandoned and rush to help.

However, meddling in this process can be detrimental to their development, RSPB experts say.

The young birds are not stranded and have not been ditched by their parents.

Instead, the mum and dad are often watching from a nearby perch, waiting for their offspring to take flight for the first time.

Goldfinches, blue tits and robins are all expected to be leaving their nests around this time of year, along with other garden birds. 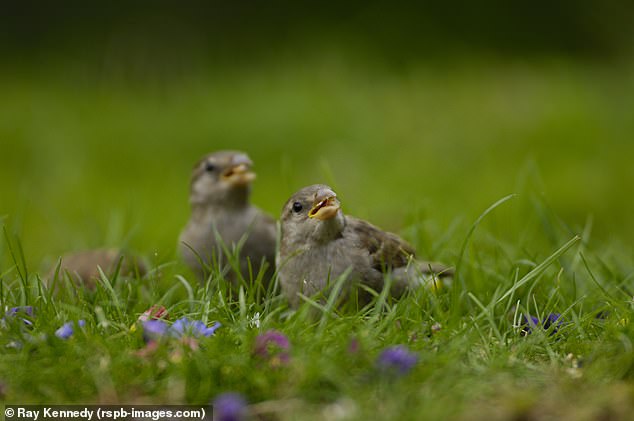 The RSPB said it cares for 1,000 fledglings every year that did not need their help. Fledglings found on the ground, like these two house sparrow chicks, should be left where they are 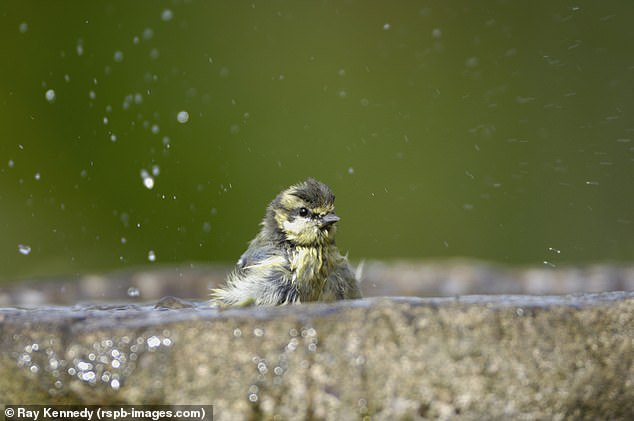 After leaving their nests, the fledglings may spend up to two days on the ground before taking flight, including this blue tit baby that is taking a bath

The RSPB’s wildlife adviser, Mey Duek, advised people not to approach tiny fledglings even if they are calling constantly.

‘Every year we get inundated with calls from people worried about an abandoned chick in their garden, desperately calling for its mum,’ they said.

‘But it’s extremely unlikely they have been deserted and in many cases there is a parent nearby keeping a beady eye on their chick’s progress or collecting food.

‘Although it’s natural to want to protect fluffy and fragile creatures hopping around all alone, the most helpful thing you can do is keep your distance.

‘Fledglings may appear dainty but they are tougher than they look. Mother and father know tough love is the only way their young will learn to fend for themselves.

The RSPB said it ends up caring for around 1,000 fledglings every year, picked up by well-meaning members of the public.

However, in many cases these are not orphans and would have been better off left in the wild.

Fledglings are young birds with all or most of their adult feathers that have just left the nest.

Nestlings, on the other hand, lack feathers and will need help as they do not survive for long outside the nest.

The RSPB cares for around 1,400 of these young birds every year.

When should you help a fledgling?

Although the RSPB recommends not interfering with fledglings, the charity said there are circumstances when Britons should come to the birds aid.

If the baby bird is on a busy road or path, the RSPB advises picking the bird up and moving it a short distance to a safe place such as a dense shrubbery.

This must be within hearing distance of where it was found. UK birds have a poor sense of smell and won’t abandon their young if they are touched.

If a cat or dog is spotted eyeing up a fledgling, then you are advised to keep your domestic pet indoors for a few days – or at least around dawn and dusk.

If a baby bird is discovered on the ground without feathers or covered in fluff, then it is a nestling that has likely fallen from its nest before it is ready.

These youngsters can sometimes be put back in their nests, but the RSPB says you should only attempt this if you are 100 per cent sure you have found its home and it is safe to do this.

It’s also important to remember that sometimes adult birds eject their chicks if they sense an underlying health problem, or if it is dying.

If you find a fallen swift it should be placed in a shoebox and kept away from noise and other disturbances. You can give it water by running a wet cotton bud around the edge of its beak.

These animals are hard to care for, so the RSPB recommends contacting a swift carer. They are listed here.

Some people may also come across barn owl chicks, which normally leave nests before they can fly.

The RSPB states that Owlets in this case do need help, as those on the ground will be ignored by their parents. They recommend gently placing it back into the nest.

Owls have a poor sense of smell and won’t reject a baby because it was handled by humans. You can check whether it is healthy at this website.