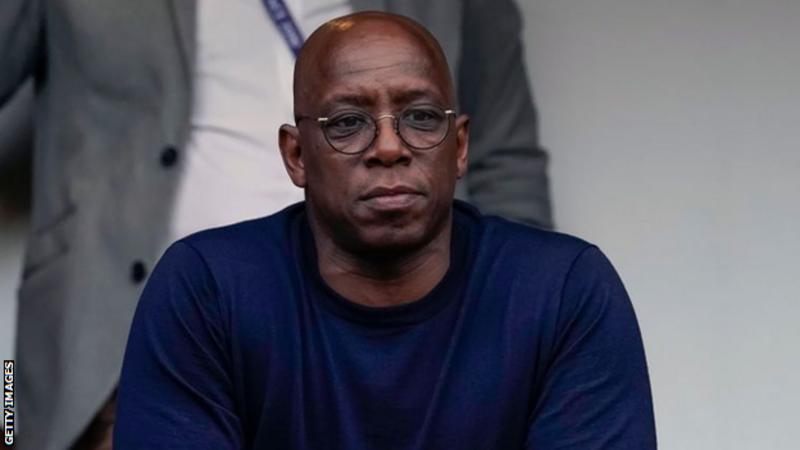 Premier League players wearing ‘Black Lives Matter’ on their shirts shows the league wants to be on the right side of history, says Ian Wright.

Players’ names will be replaced on the back of their shirts with ‘Black Lives Matter’ for the first 12 matches of the restarted season.

A Black Lives Matter badge will feature on all playing shirts for the rest of the season.

“What the Premier League have done, is to give them the power,” said Wright.

“Wes Morgan and Troy Deeney, the way they’ve got that going with the rest of the captains, to give them that much power is a line in the sand for the Premier League about where they are going and on what side of history they want to stand.”

Watford captain Deeney played a pivotal role in the discussions between club captains and the Premier League, alongside Leicester City’s Morgan.

Speaking on BBC Radio 5 Live’s Monday Night Club, former Arsenal and England striker Wright added: “It is about changing attitudes. We see that with the lack of black people at board level in UK governing bodies, it’s embarrassing.

“You need change because unless you get people of colour in positions of power who can say ‘that’s not right’, being there to speak and let their voices be heard, then how is it going to change?

“When you see Wes Morgan and Troy Deeney with the captains and everybody, they’ve been so vocal – Kevin de Bruyne, Jordan Henderson have been so vocal in their support towards these guys because they know it’s right. It’s as simple as that.”

Wright, who was sent racist abuse on social media last month, said he now felt there was “momentum” behind the movement for racial equality for the “first time in his lifetime”.

It comes after the death of George Floyd in the United States, which has sparked protests worldwide.

Floyd, a 46-year-old unarmed black man, died after being restrained by a white Minneapolis police officer on 25 May.

“For the first time in my lifetime, even being racially abused a couple of weeks ago myself – it’s still prevalent – this moment we are in right now in respects of movement and momentum, is the best it’s been,” said Wright.

He added: “The Premier League has done brilliantly to back it and hopefully now it will continue with the momentum.

“We are not waiting for an incident before we talk about stuff now because people will be having the conversation. We don’t need a player to get racially abused before we say ‘what are we going to do?’

“As a 56-year-old black man, who not too long ago it happened to me again, we’re in a time now where something’s happening, something’s changing and that’s what’s good about it.

“Now they are going to continuously move forward and that’s what you want.”