BLACKPOOL, Liverpool and Hull have suffered the highest spikes in unemployment since the coronavirus crisis began. 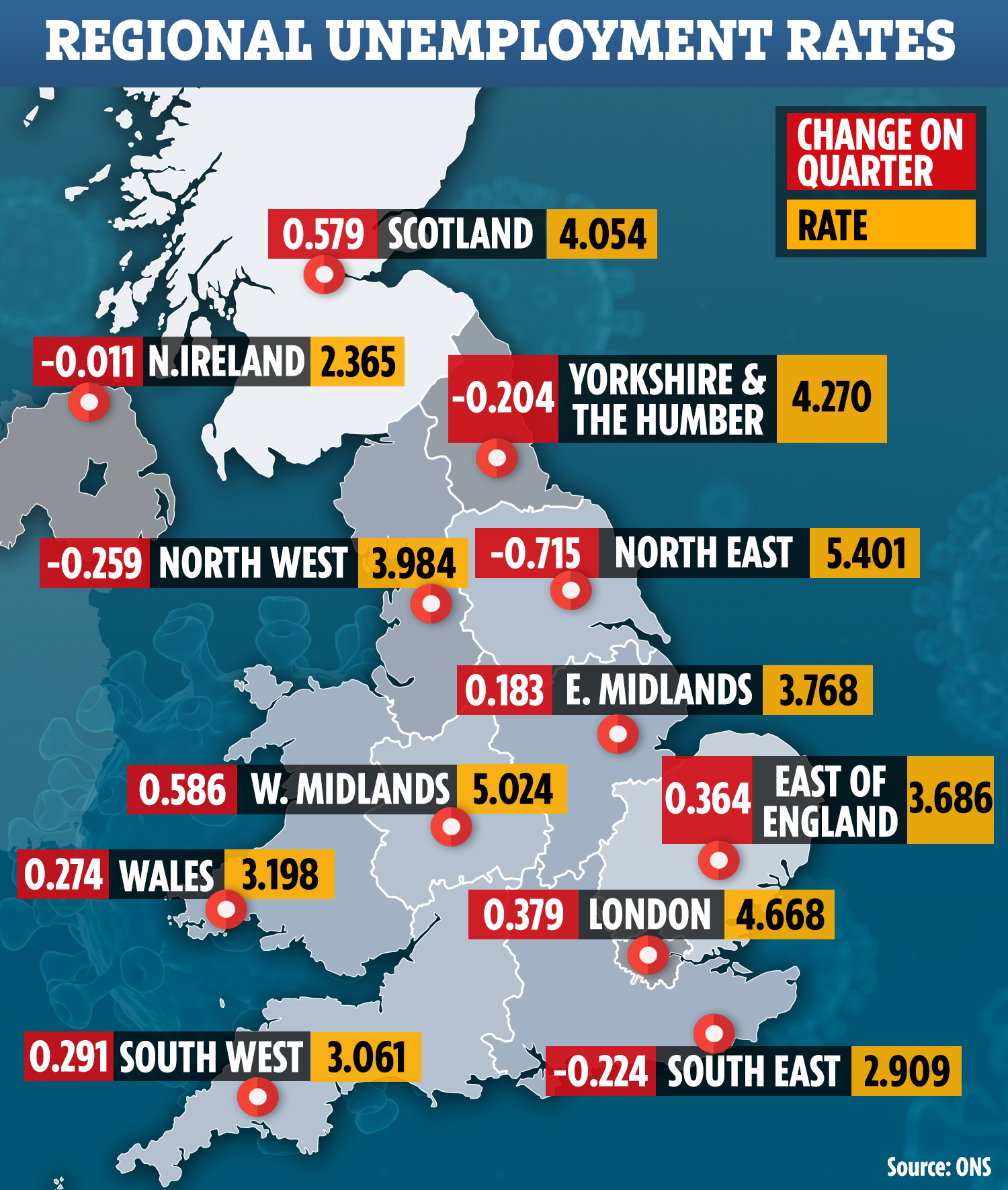 The analysis of Office for National Statistics figures by the Centre for Cities think tank lays bare the way the coronavirus crisis is likely to widen the north-side economic divide.

Regionally, for the three months ending March 2020, the highest unemployment rate estimate in the UK was in the North East (5.4 per cent) and the lowest was in Northern Ireland (2.4 per cent).

Overall, benefit claims for jobseeker's allowance and for the searching for work element of Universal Credit have jumped 70 per cent in a month to 2.1million.

On a cities basis, Centres for Cities ranked the increases in unemployment in the UK’s 63 largest cities and towns.

THE aim of the government’s job retention scheme is to save one million workers from becoming unemployed due to the lockdown.

Under the scheme, the government will pay 80 per cent – up to £2,500 a month – of wages of an employee who can’t work because of the impact of coronavirus.

Workers will be kept on the payroll rather than being laid off.

The scheme has been extended to run until the end of September (although businesses will be asked to chip in from August) and can be backdated to March 1 2020.

It’s available to all employees that started a PAYE payroll scheme on or before March 1, 2020.

If you’re between jobs, have started at a new place of work or were made redundant after this date then you can ask your former employer to rehire you to be eligible for the scheme.

Employers can choose to top up furloughed workers’ salaries by the remaining 20 per cent but they don’t have to.

Firms who want to access the scheme will need to speak to their employees before putting them on furlough.

While on furlough, staff should not undertake any work for their employer during the scheme.

One in nine people in Blackpool are claiming unemployment benefit according to the figures. The town saw a 3.4 per cent jump in unemployment last month.

Liverpool saw the second highest increase with an additional 2.9 per cent signing on in April. Some 7.6 per cent in the city are now unemployed.

Hull suffered the third highest increase (2.8 per cent), leaving 8.7 per cent of the city’s population out of work.

Belfast, Manchester and Doncaster suffered the next highest spikes with all three seeing a 2.6 per cent increase. Sunderland, Newcastle and Midlesbrough were also among the hardest hit, according to the data.

But at the other end of the spectrum were Cambridge, which saw just a 0.9 per cent increase in jobless numbers last month. Just 2.5 per cent of the city claimed unemployment benefits.

Fellow university city Oxford is second least affected in the table, suffering a 1.1 per cent increase to 3.1 per cent, while Reading saw a 1.3 per cent rise to 3.3 per cent of households unemployed.

The Department for Work and Pensions (DWP) does, however, point out that the figures of those signing on do include some benefit claimants who have low paid or low hour jobs meaning not all claimants are out of work.

Furloughed workers count as employed as the idea behind the coronavirus jobs retention scheme is for people to return to their jobs in due course.

The coronavirus epidemic started to take hold of the UK in March, with lockdown beginning on March 23.

Unemployment figures jumped by 50,000 to 1.35million in the three months to March, the ONS said today.

It takes Britain's unemployment rate up to 3.9 per cent.

Minister for employment Mims Davies MP said: “Clearly these figures are behind on our current struggle but the impact of this global health emergency is now starting to show – and we’re doing everything we can to protect jobs and livelihoods."

The retail, travel and hospitality industries have been particularly hard hit by coronavirus, with job losses and pay cuts being announced and some firms folding altogether.

British Airways, for example, has announced that up to 12,000 jobs are to be scrapped while Ryanair is axing up to 3,250 roles.

On the high street, Debenhams has gone into administration, and Cath Kidston, Oasis and Warehouse have shut their doors for good.