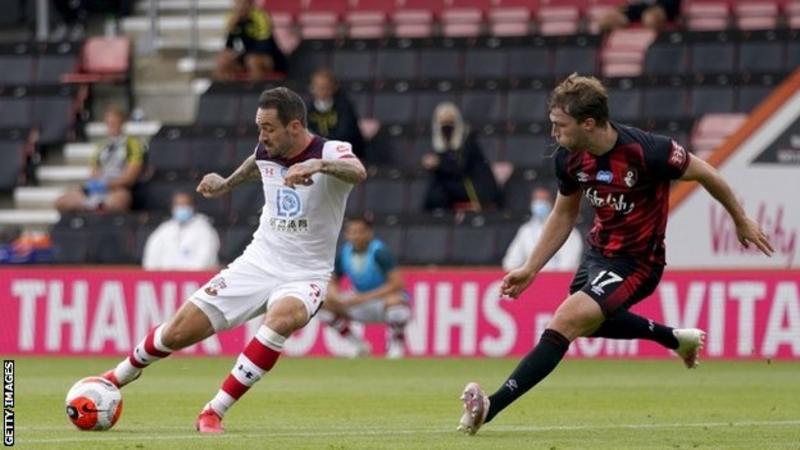 Bournemouth are on the verge of relegation after losing to local rivals Southampton – with the video assistant referee denying them an injury-time equaliser.

Sam Surridge fired home from a tight angle – but a VAR review correctly found that Callum Wilson was offside.

Danny Ings had put Southampton ahead and Che Adams blasted in a second right at the death to complete an agonising few minutes for Bournemouth.

They will be relegated on Tuesday if Watford get a point against Manchester City – or if the Hornets get one against Arsenal on the final day.

The Cherries – who must win at Everton next Sunday to have any chance of survival – are three points behind the 17th-placed Hornets, who are set to sack Nigel Pearson, with a worse goal difference by four.

Ings, 27, opened the scoring with a fine finish from just outside the box – his 21st Premier League goal of the season.

But he failed to move within a goal of the league’s top scorer Jamie Vardy when his penalty was saved by Aaron Ramsdale.

Bournemouth ended with half their team playing up front and Harry Wilson’s curling effort was tipped around the post by Alex McCarthy before the late, late drama.

After Surridge’s goal was ruled out, Adams smashed home to make the Cherries’ goal difference even worse.

Bournemouth were so close…

Bournemouth’s rise from the bottom of League Two to become an established Premier League team under Eddie Howe has been a great story in recent years.

But that could soon all be over after a run of nine defeats in their past 12 games.

Three points off safety – with a worse goal difference and one game left – might seem like a forgone conclusion. But Watford’s tough run-in against the Gunners and City will give Howe hope of at least taking it to the final day.

However, their goal difference takes them below Aston Villa in the league, and four points from Villa’s last two games – against Arsenal and West Ham – would also relegate the Cherries.

They played some nice football against their neighbours, especially in the first half, but all their efforts on target came in the last 25 minutes as they threw everything at Saints.

Harry Wilson hit a weak shot towards McCarthy, with Steve Cook then heading straight at the keeper before Harry Wilson was so close to rescuing a point in injury time.

Surridge thought he had his first Premier League goal late on but Callum Wilson was rightly judged to be offside before the substitute pounced by VAR.

The Cherries have been toothless this season and their fight was too little, too late on Sunday.

Now they must just wait and hope their dreams do not end in two days’ time at Vicarage Road.

Southampton have been safe for a while – having looked doomed before Christmas – but their season has not petered out, with their unbeaten run now extended to six games.

The major subplot has been whether Ings, who has a solitary England cap, can win the Golden Boot.

He is on 21 goals for the season after his fine opener, when he took Nathan Redmond’s pass, cut past a defender onto his right foot and curled his shot home.

That is the 10th time he has opened the scoring in a league game this season – and his fourth Premier League goal from outside the box this term. No player has managed more of either this campaign.

He went close again just after the break but curled wide.

And he will rue his slow run-up for his penalty as Ramsdale guessed correctly to save his spot-kick. That leaves him two behind Leicester’s 23-goal Vardy, who has two games left.

Adams added a 98th-minute second from Michael Obafemi’s pass as Bournemouth sent most of their players forward.

Ralph Hasenhuttl’s side face Sheffield United next week in their final game.

Man of the match – Aaron Ramsdale

‘We have to believe it’s possible’ – what the managers said

Bournemouth manager Eddie Howe speaking to BBC Sport: “In some ways it sort of mirrored our season.

“It was a really cruel twist. We worked so hard to create the chances we needed and you think in that moment you’ve been rewarded.

“We’ve had a couple of nearly moments. If that was scored last year it would have counted. It certainly hurt us psychologically in that moment.

“We were in the game. The players were committed to everything we asked them to do today. I’m disappointed with the two goals we conceded.

“We’ve got to still believe it is possible. It is difficult and fate is out of our hands. We’ll wait and see.”

Southampton boss Ralph Hasenhuttl to BBC Sport: “We had it in our own hands to make it clear and massive chances in the second half. I think Ingsy only makes the difficult ones, not the easy ones.

“He had to wait to shoot (the penalty) and maybe he’s thinking about the 21 goals in his mind and maybe getting 22.

“The second goal would have killed the game earlier so it was a massive battle from my side. You see it is not necessary to play for relegation or Europa league, it is enough to play for three points.”

Match stats – only Liverpool better on road than Saints

Pierre-Emile Højbjerg (Southampton) wins a free kick in the defensive half.

GOAL OVERTURNED BY VAR: Sam Surridge (Bournemouth) scores but the goal is ruled out after a VAR review.

James Ward-Prowse (Southampton) is shown the yellow card for a bad foul.

Sam Surridge (Bournemouth) wins a free kick in the defensive half.

Attempt saved. Harry Wilson (Bournemouth) left footed shot from the centre of the box is saved in the bottom left corner. Assisted by Callum Wilson.

Che Adams (Southampton) wins a free kick in the attacking half.

Attempt blocked. Pierre-Emile Højbjerg (Southampton) right footed shot from the right side of the box is blocked. Assisted by Danny Ings.

Attempt saved. Steve Cook (Bournemouth) header from the centre of the box is saved in the bottom left corner. Assisted by Diego Rico with a cross.