DOMINIC SOLANKE has been a figure of fun for most of his time at Bournemouth.

But after finally netting his first league goals for the club to keep the Cherries in the hunt for survival, perhaps he will have the last laugh after all. 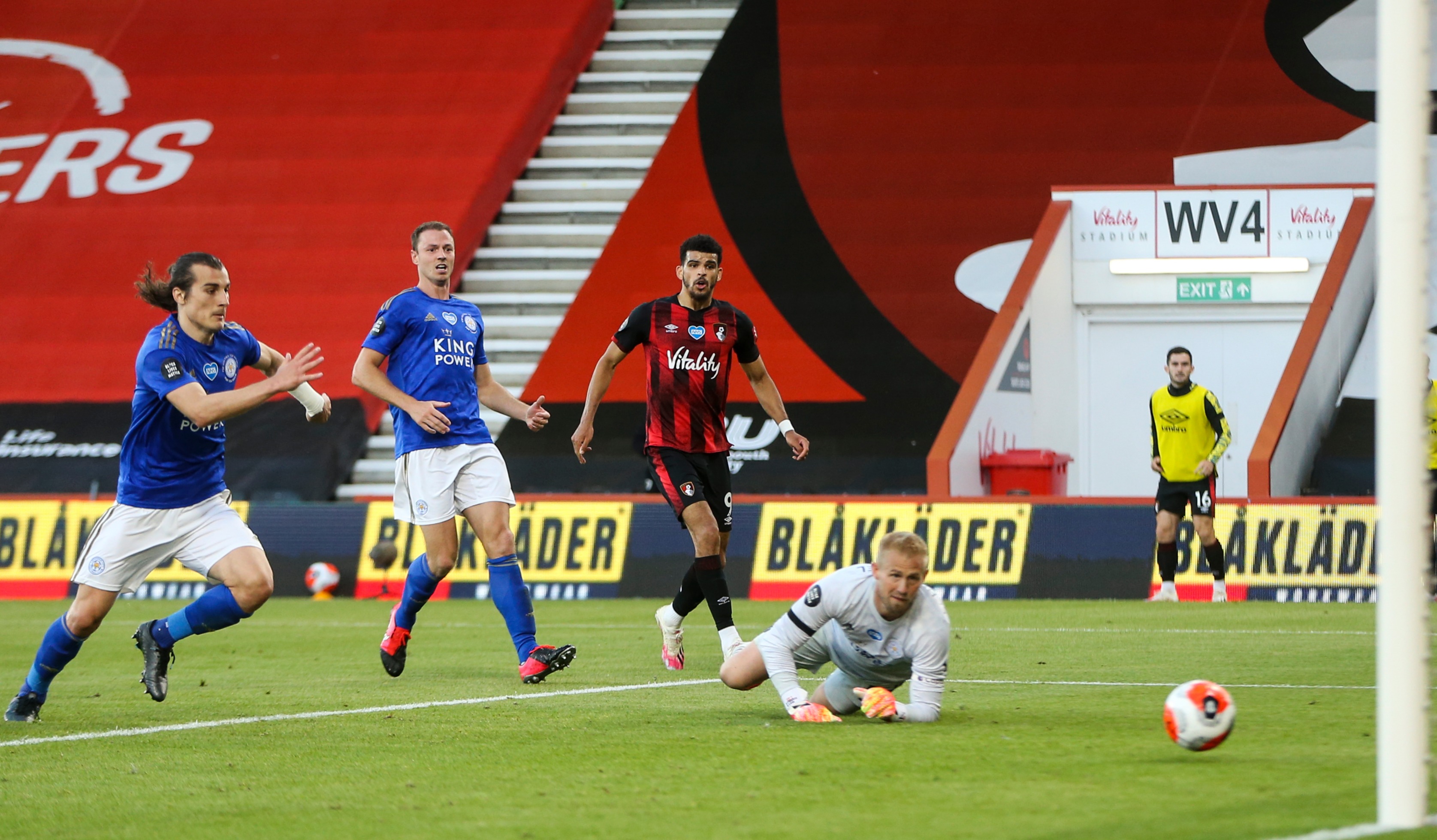 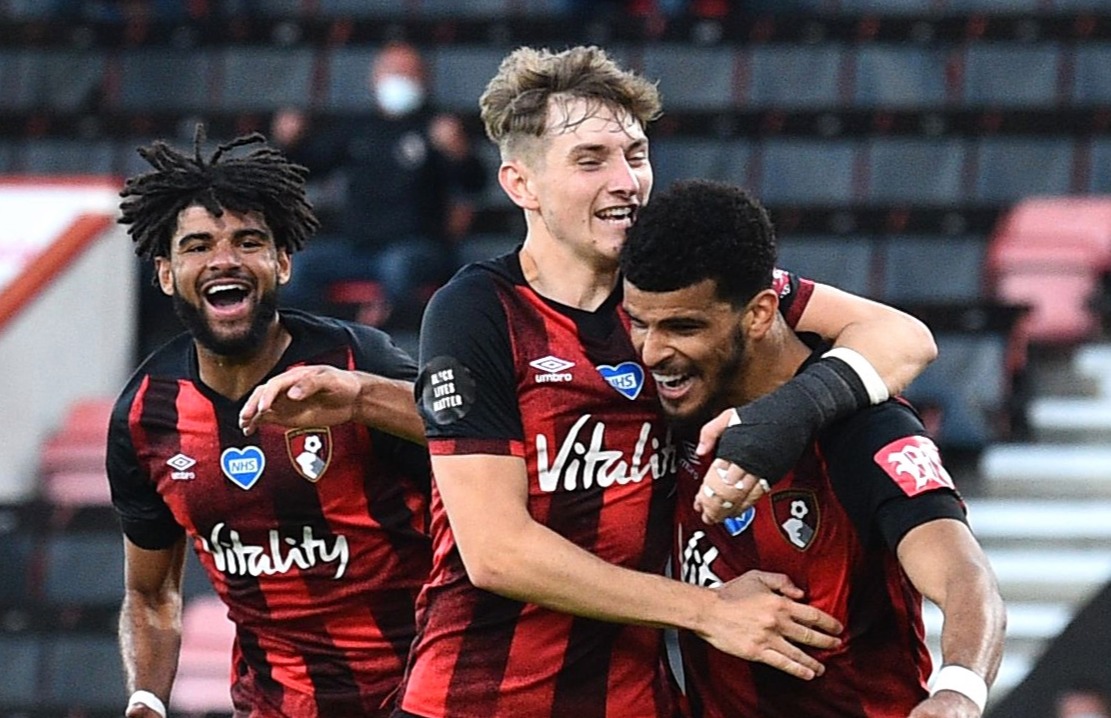 Solanke had managed just one goal in 43 appearances since joining from Liverpool for £19million in January 2019 – and NONE in 39 league games.

The much-maligned striker symbolised all that had gone wrong under Eddie Howe in the last 18 months as they headed for the Premier League exit door.

But he has never stopped working, never given up belief and has always had the faith of his manager.

And now that could well epitomise how the Cherries are not giving in on their bid for Prem safety this year.

Stanislas’ first was a penalty which sparked an amazing turnaround and chalked off Jamie Vardy’s opener.

But it gave Howe’s men renewed belief that they still have what it takes to get out of trouble, putting a Champions League-chasing Leicester – who had Caglar Soyuncu sent off – to the sword.

BUILD YOUR ACCA Enjoy loads of acca features with Ladbrokes including Boost, Track, Edit and Insure

The knives were out for Howe going into this game after a dreadful run of 17 defeats in 23 games and just one point from the restart.

The team looked nothing like that which smashed four past Claude Puel’s Leicester in this fixture last season.

That match ended up 4-2 with Ryan Fraser, Josh King and Adam Smith scoring – all of whom were missing here due to differing reasons.

That performance in September 2018 was Bournemouth at their peak in the Premier League.

They were all explosive counter-attacks and lethal finishing – whereas recently they have resorted to lumping it long and looking shotshy up front.

That was the way this game was going for over an hour, which makes it all the more incredible that Howe’s men ended up equalling their goal haul from last year. 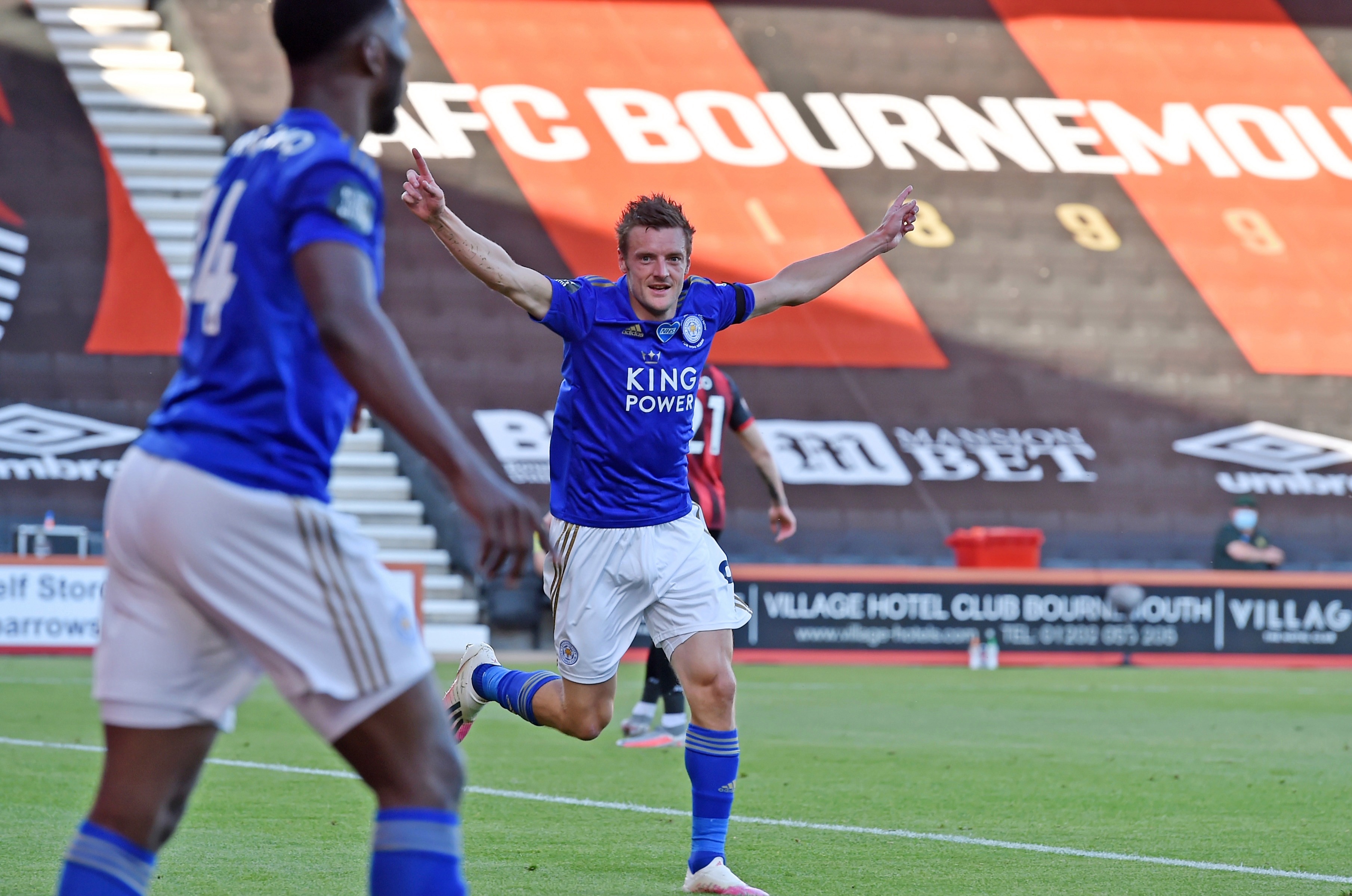 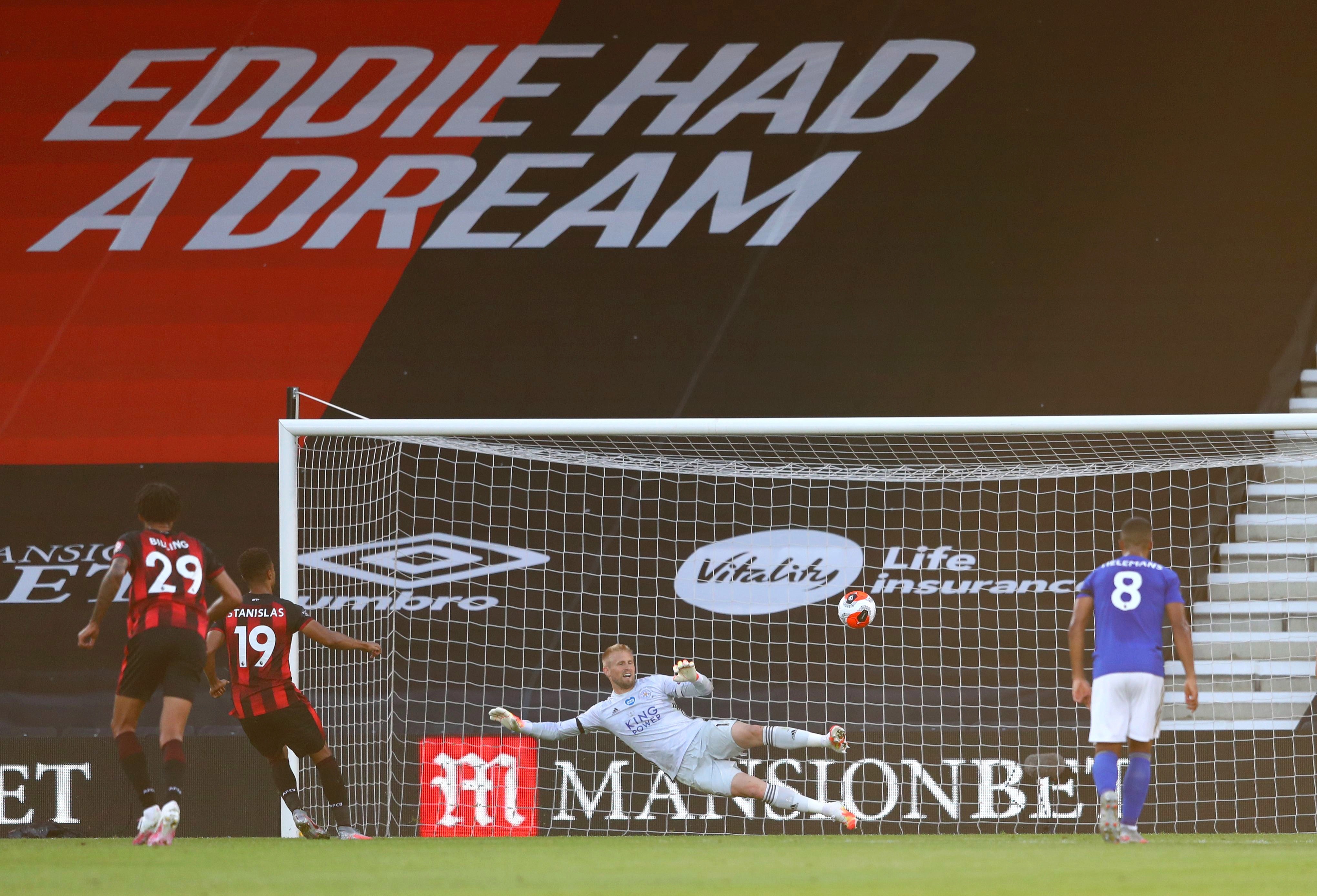 Leicester had their own pressure of a Champions League qualification race, knowing they could tighten their grip on a top-four spot after Chelsea were battered at Sheffield United.

It was all going to plan when Vardy bundled home his 23rd of the season in the 24th minute.

Ayoze Perez picked Dan Gosling’s pocket and fed Kelechi Iheanacho, whose lofted effort struck the back of Lloyd Kelly, and there was Vardy to force the ball home.

Vardy would have had a second just before the break when racing onto Arnaut Danjuma’s horror back pass.

The ex-England man was denied by Nathan Ake’s brilliant block – but the Dutchman injured himself in the tackle and was forced off injured.

Everything pointed towards a similar collapse by the hosts as they had shown against Newcastle a few weeks ago.

But in the 65th minute, they were given the most unlikely stroke of luck which turned the game on its head.

Kasper Schmeichel and Wilfred Ndidi were both equally guilty as the keeper fired a poor goal-kick out which hit Ndidi, who had turned his back to it.

That allowed Wilson to race in and when Ndidi clipped him, Stuart Attwell pointed to the spot, booking the Nigerian.

Stanislas, who had been introduced at half-time, showed serious bottle to take the stressful spot-kick while Schmeichel tried to put him off. But the Dane’s taunts failed as Stanislas fired it down the middle.

It was an unexpected lifeline. But still, one point was not going to be enough. They were going to have to hunt down a winner.

Little did they expect it to come so quickly, as just a minute later, Solanke put them ahead. 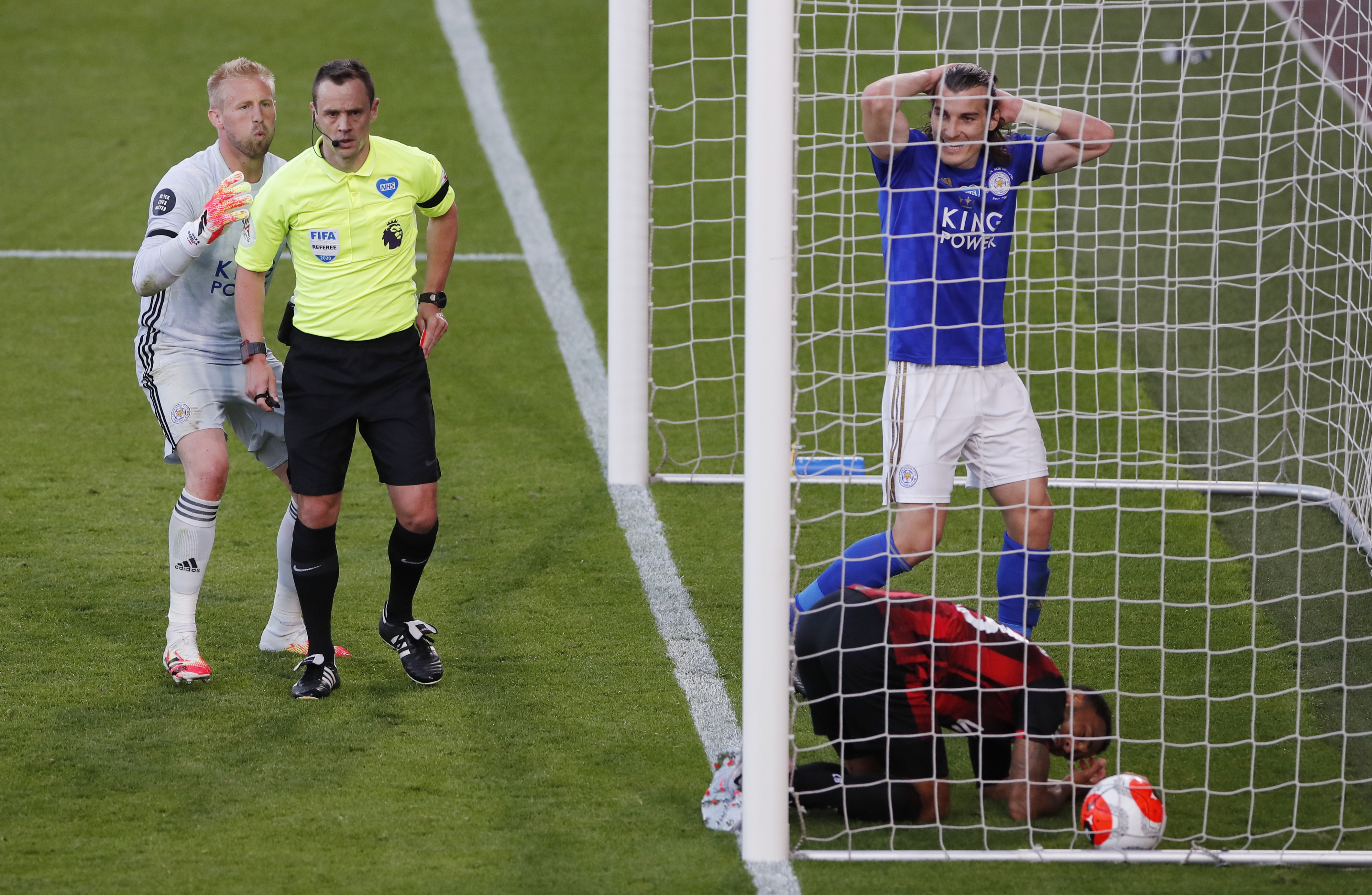 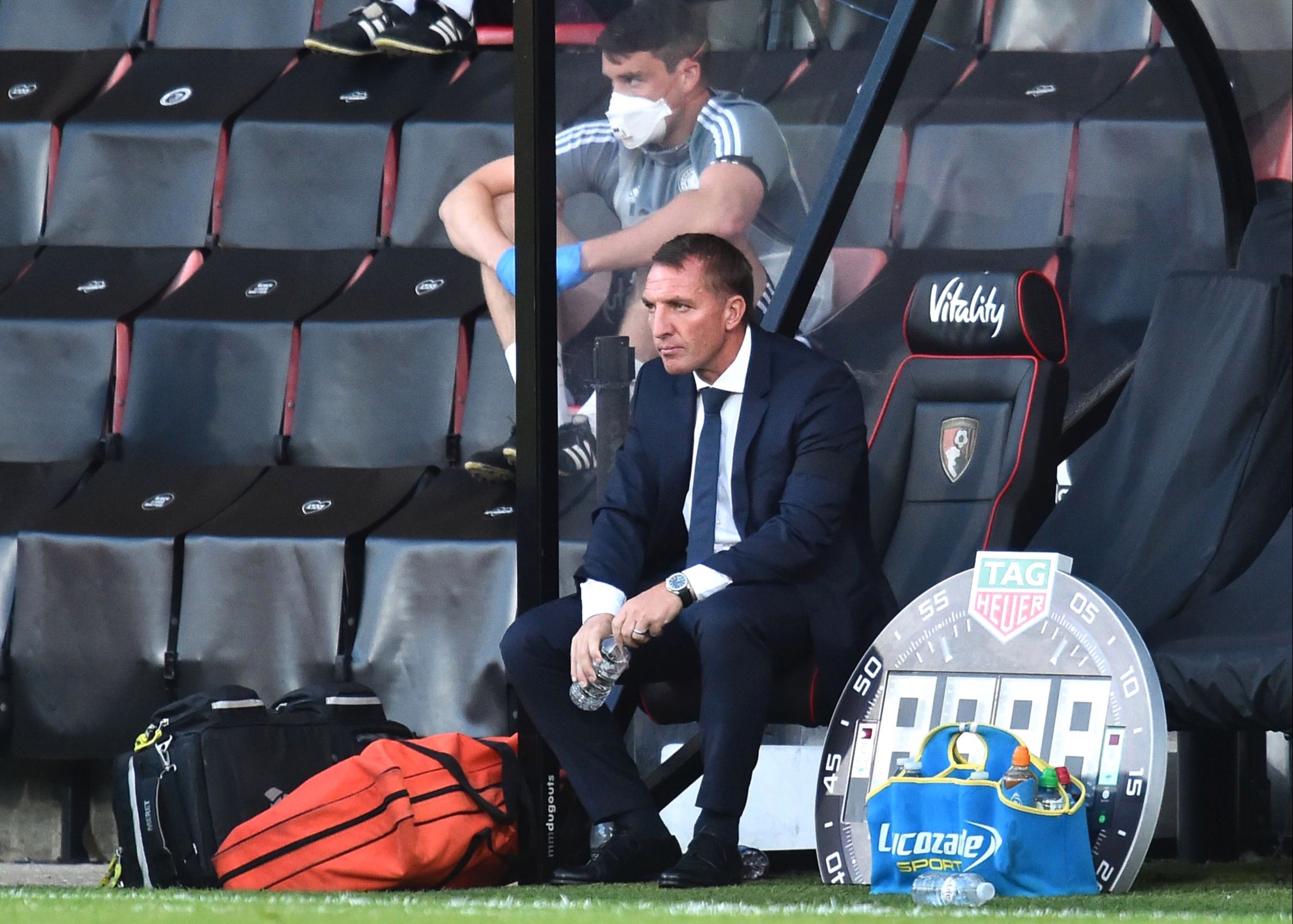 Wilson was again involved as he flicked the ball on to his strike partner, who squeezed it under Schmeichel and into the corner to break his duck at long last.

There was drama in the aftermath as Soyuncu kicked out at Wilson as the England striker tried to get the ball while in the net.

A VAR review showed the Turk was banged to rights.

Leicester, still scratching their heads over how they had let a crucial win slip through their fingers, were down to ten men.

A nervy end was avoided when Stanislas grabbed his second by drilling in off Evans.

And Solanke added some gloss with his own double as he grabbed a loose pass and nutmegged Schmeichel to cap an incredible night for him personally and his side.

Bournemouth won their last three games of the season when they pulled off their original Great Escape in 2009, to prevent relegation out of the Football League.

They may have to repeat the feat this time round with the way things are going.

But just as with their striker Solanke, you write them off at your peril.