Mobile networks and internet providers in the UK are being urged to relax their data limitations as millions of Britons work from home amid the coronavirus pandemic.

The pandemic has shut down much of the world and millions of British adults and children are now spending increased periods of time inside their homes.

Internet suppliers are reporting increased data consumption of between 20 and 30 per cent compared to normal working hours as families log on to educational material online, play digital games, stream music, watch films and TV on multiple devices, as well as work from home.

Alex Tofts, Broadband Expert at Broadband Genie, urged network providers to respond to the increased demand by easing restrictions on consumers and lifting any data caps that are in place.

He told MailOnline: ‘One step all providers could take is to relax data limits, both on mobile and home broadband services.

‘It’s especially important for mobile, where data caps are often low and exceeding limits can be expensive.’

BT Openreach revealed increased demand of around 20% on Tuesday March 17 following Boris Johnson’s guidance for millions to work from home on Monday. However, it is still far below the normal evening peaks (pictured) and that is why broadband providers are confident they can cope with increased demand during the coronavirus pandemic

His call comes as Netflix announced it would cut down the quality of its streaming services in Europe by 25 per cent for the next 30 days.

The move followed calls by the European Union for online media platforms to stream movies and entertainment in standard rather than high definition to relieve the pressure on internet providers during the coronavirus crisis.

Vodafone reported that internet usage has surged by up to 50% in some European countries.

In the UK network providers are currently offering customers increased data and unlimited access to NHS sites during this period of mass self-isolation.

Many mobile data plans are now unlimited, as are the majority of home broadband subscriptions, which experts say will be sufficient for most people to cope while working from home during the ongoing COVID-19 outbreak.

Virgin Mobile has pledged unlimited minutes and 10GB of extra mobile data to help customers trying to get online as they are urged to work from home.

Vodafone, which offers both broadband and mobile internet, has stated it will give customers unlimited access to NHS UK online websites.

Broadband providers TalkTalk and BT Openreach are confident they can meet the increased demand as the system is built to support so-called ‘evening peak’ traffic.

This is defined as ten times the typical daytime (working hours) demand and can be up to 17Tb/s. 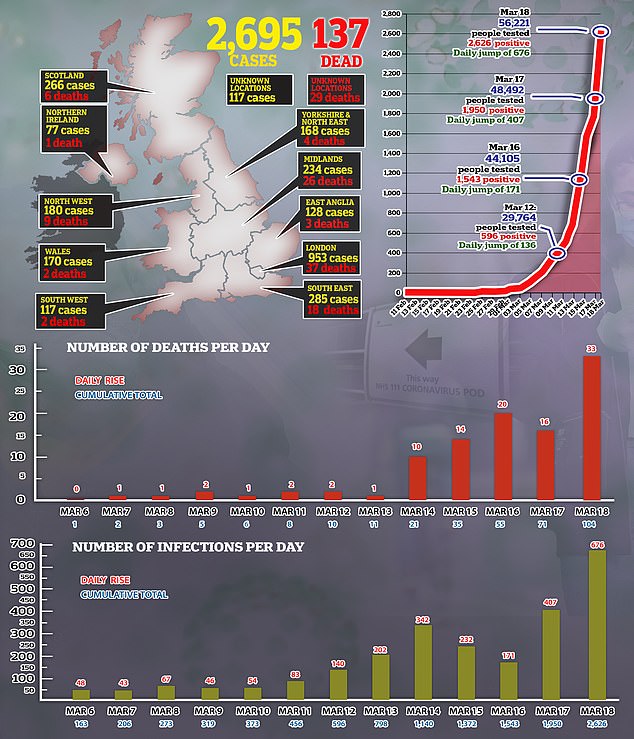 Mobile networks and internet providers in the UK are offering customers increased data and unlimited access to NHS sites during this period of mass self-isolation. The coronavirus pandemic has shut down much of the world and millions of British adults and children are now spending increased periods of time inside their homes

INTERNET USAGE HAS INCREASE IN THE UK

Lebara Mobile told MailOnline that over its network it has actually seen a decline in its mobile internet usage.

TalkTalk, which offers all its customers unlimited data usage, says its daytime network traffic was around 20 per cent higher on Tuesday.

A Vodafone spokesperson told MailOnline internet traffic over both its broadband and mobile services have increased around 30 per cent.

This is driven primarily by users flooding to news sites and video streaming services for video calls,

‘However, depending on your online needs, 10GB will go quickly – video calls can use up to around 300MB per hour.’

So far, only Virgin Mobile has pledged increased data allowances for users.

‘We have been adding extra capacity to our network and engineers are putting in different hardware and additional lines to cope with any increased demand.’

Vodafone has already pledged to give free and unlimited access to NHS sites but has thus far made no moves to increase the general allowance of internet available to customers.

In a statement provided to MailOnline, a spokesperson for rival company O2 said: ‘To support our customers, all those on O2 Pay Monthly and Pay As You Go can now visit NHS websites without using any of their data allowance, and calls to NHS 111 are already free for all O2 customers.

‘Our customers can also access for free health and social welfare helplines beginning 080 and websites offering mental health support such as MIND, The Mix and Rethink.

Lebara has revealed is has seen a slight drop in data usage but a 15 per cent jump in voice calls. It has made no indication of increasing allowances.

MailOnline understands EE has made it free for users to access NHS websites.

A spokesperson from EE said: ‘All of our home broadband plans are unlimited, so customers can use as much data as they need if they’re spending more time at home.’

Independent experts and the broadband providers themselves insist the existing internet infrastructure in the UK has the capacity to deal with the increased demand.

In a limited dataset, it appears remote working during the day is still considerably below the levels of the normal evening peak.

However, the pattern of usage is already changing.

TalkTalk, which offers all its customers unlimited data usage, says its daytime network traffic was around 20 per cent higher on Tuesday, the morning after Boris Johnson urged all Britons to work from home where possible, than normal.

The early indications are that this new normal was replicated yesterday and the firm is confident it can cope as it is still down on normal evening peak usage.

Under normal conditions, around 6pm a spike in data usage occurs as workers return home from work and home broadband is utilised for streaming, a data intensive process.

BT Openreach, which is the UK’s biggest provider of broadband to homes, says it has no doubt it can cope with any demand increases.

In a statement, BT Openreach said: ‘Our network is designed to handle a 17Tb/s evening peak in consumer traffic with daytime business use around only a quarter of that – which is why we’re confident of being able to support mass-scale home working in response to COVID-19.’

However, the issue for home workers comes at the ‘final mile’ section of the internet system.

Vodafone told MailOnline: ‘There may be a pinch point and a bit of congestion as the broadband systems adjust to the demand during the day, but our network will cope.’