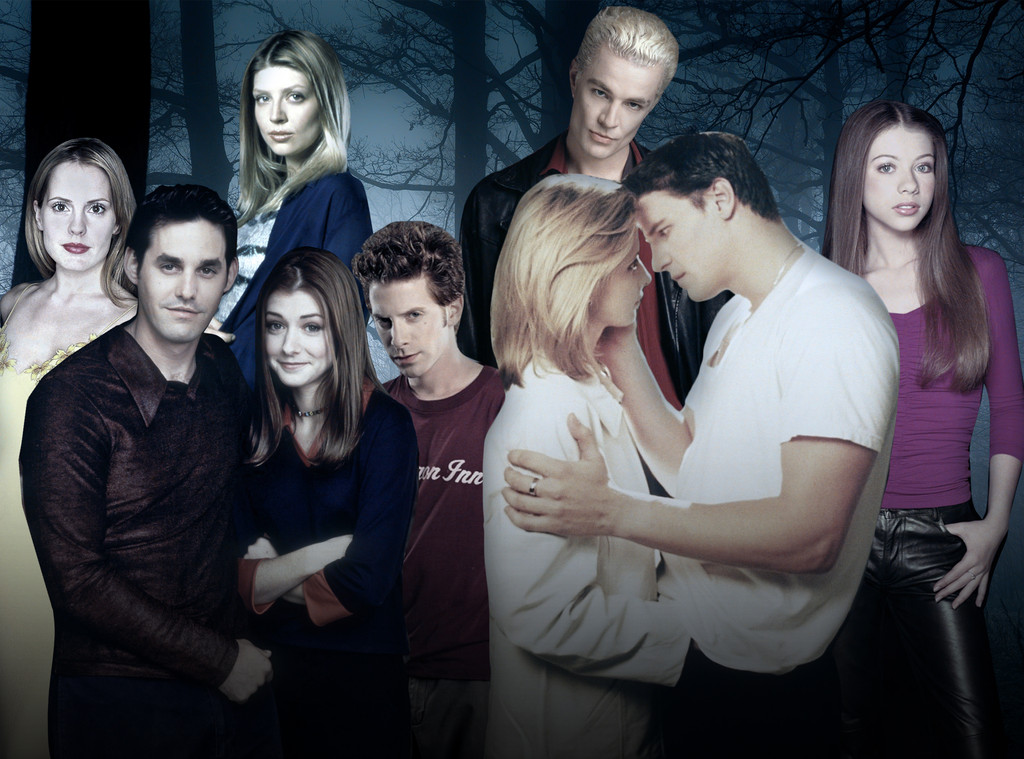 But in all Scooby seriousness, it’s time to celebrate the 23rd anniversary of the premiere of Buffy the Vampire Slayer, the still-beloved cult classic that was critically beloved, adored and obsessed over by fans, and chronically underappreciated come award show time. One Emmy nomination for visual effects. One Golden Globe nomination for Sarah Michelle Gellar.

Pfft, what do adults know, anyway?

Everyone who watched and re-watched Joss Whedon‘s landmark take on a story that started as the 1992 film starring Kristy Swanson and Luke Perry, and then turned into so much more, knew knew that they were in on something special. And though Whedon has gone on to direct The Avengers, The Cabin in the Woods and other needle-moving movies, the alchemy he cooked up on the set of the WB (and later UPN) series is the stuff from which his reputation as a visionary—and one particularly in tune with the rises and falls of the teenage emotional state—was made.

And at the heart of it all were… the actors. 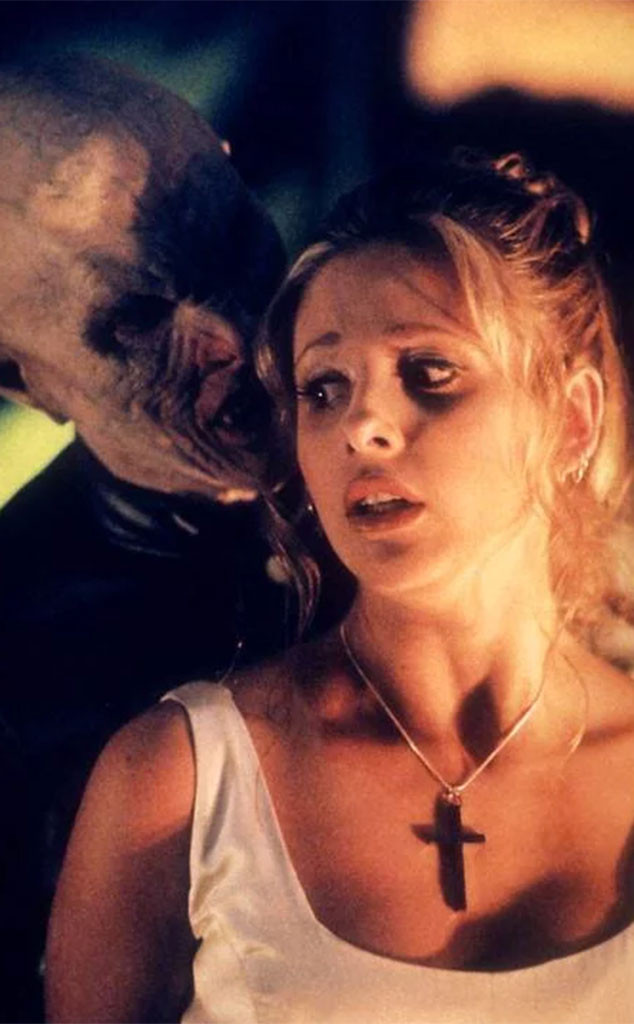 Sometimes, when you’re thinking about Buffy and Angel (or Buffy and Spike, or Buffy and Riley—if Carrie and Aidan was your cup of tea, maybe), it’s easy to forget that all have gone on to lead post-Buffy lives, because for seven unforgettable seasons they just were these people (and assorted creatures). Gellar admitted during a panel at Paley Fest in 2008 that Whedon and executive producer Marti Noxon had to “talk her down off the ledge” on multiple occasions during the sixth season, most of which Buffy spent cloaked in self-loathing and having clandestine sex with James Marsters‘ vampire Spike after being yanked out of heaven and back to Sunnydale.

And that’s one of the more straight-forward plot points. 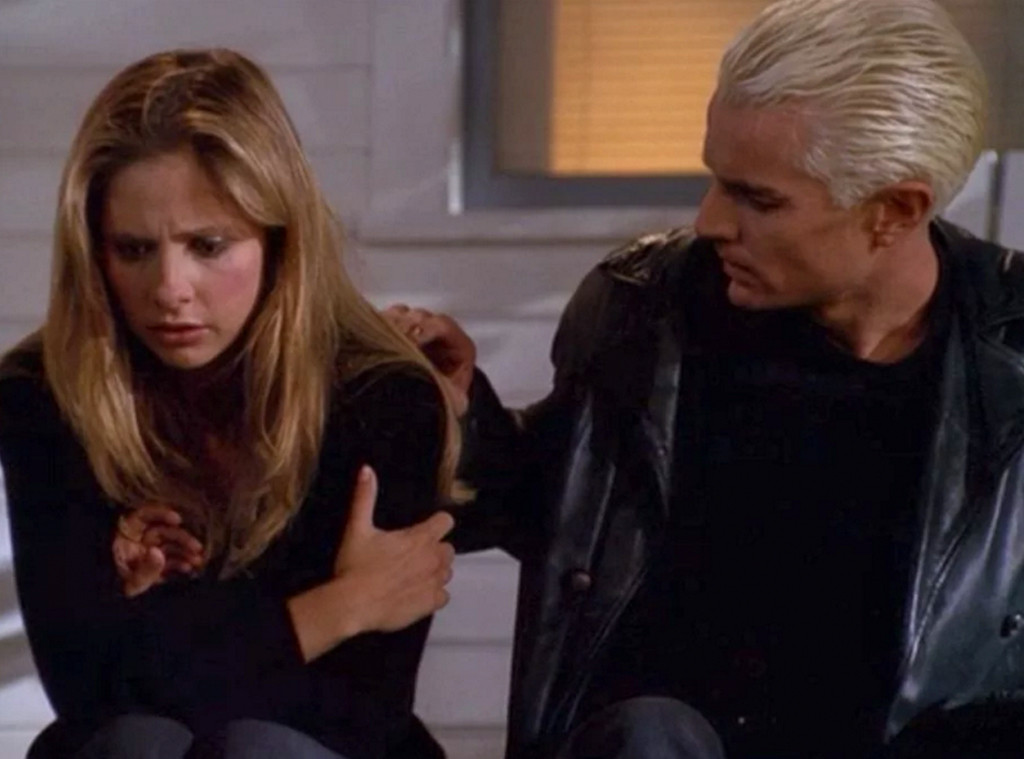 Books and theses have been written, college courses taught, the series has extended in graphic-novel form and, throughout, the show has been dissected for the itsy-bitsiest minutiae.

That’s why in 2017 it was so momentous when a dozen members of the main cast, minus Anthony Stewart Head, who had play rehearsal, reunited for a big Entertainment Weekly spread for their 20th anniversary. In a cemetery setting, naturally.

(Meanwhile, Head hasn’t detached from the experience—last year he tweeted about rewatching “The Body,” the episode where Buffy’s mom dies, and Emma Caulfield Ford and Nicholas Brendon weighed in.) 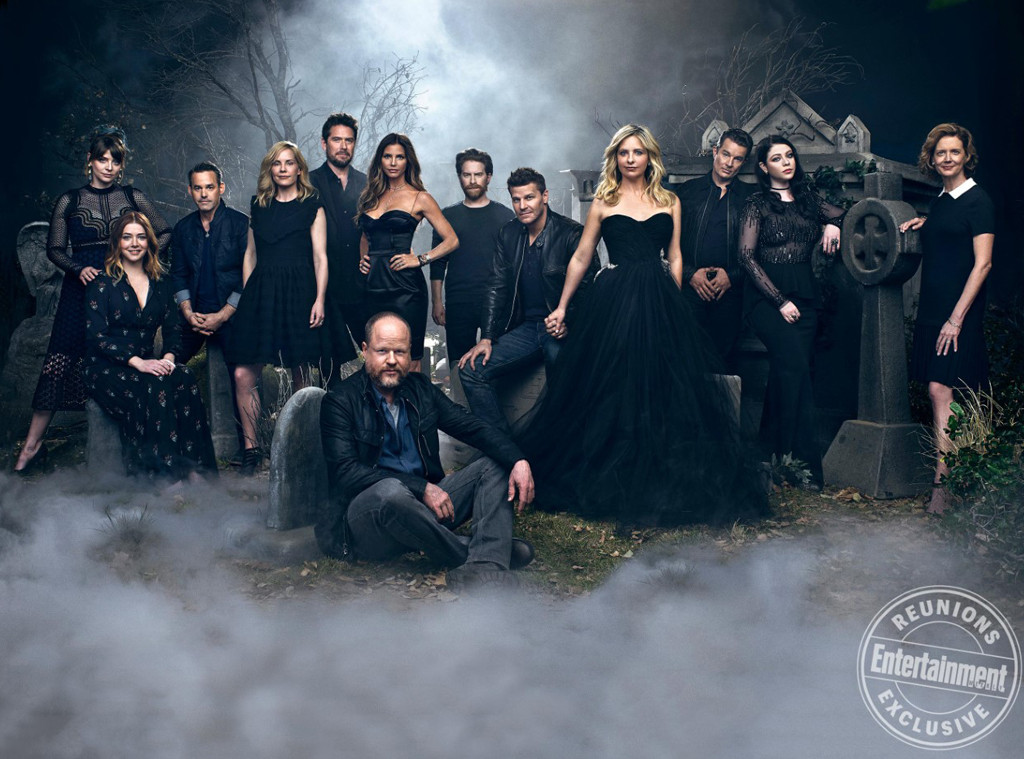 But back to these actors, who had to act as though the world was ending (the threat was usually nigh) on a daily basis, but then were going about their business as non-slayer, non-witch, non-vampire, non-werewolf, non-demon humans as soon as the cameras stopped rolling.

For starters, Alyson HanniganBuffy’s witchy BFF Willow Rosenberg—met the future father of her children on the set when Alexis Denisof showed up to play pedantic watcher Wesley Wyndam-Pryce in season three. 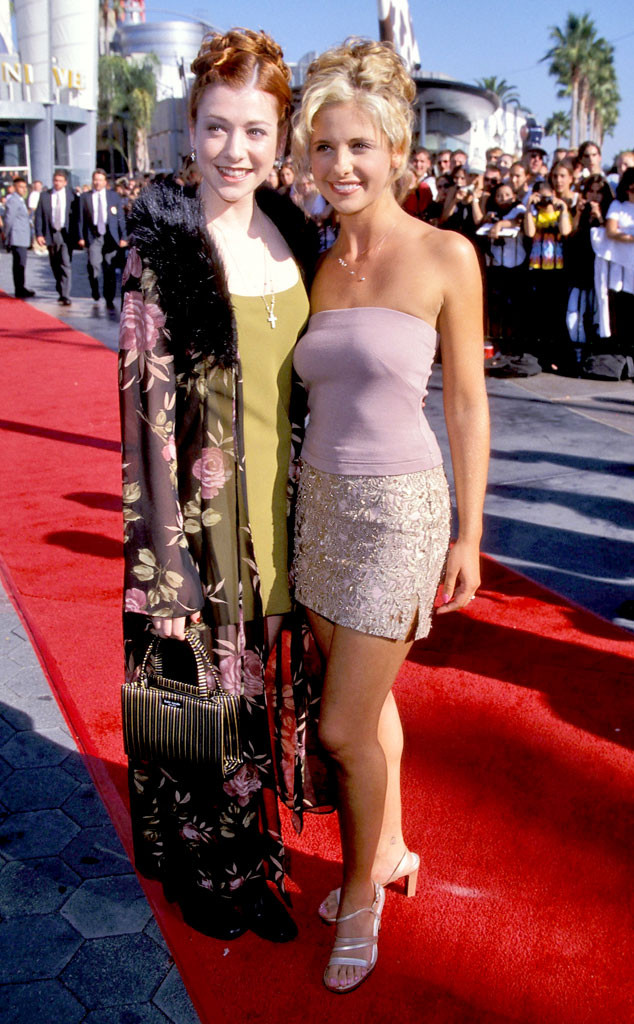 Hannigan let spill on Watch What Happens Live in 2013 that, by series end, Gellar was probably the most annoyed cast member. As in, she was over it by season three, Hannigan guessed.

“This has been the longest span of my life in one place,” Gellar told EW in 2003 after revealing she’d be leaving the show after seven seasons. “There’ve been times where that’s been difficult—you want to pick up and go, try other things, live in different places. It feels right, and you have to listen to that.”

Added Whedon, “There’ve been times that we didn’t get along. There have been times when we’ve palled around. But no matter what, she was the other half of Buffy. In seven years, she never let me down.” There was talk that she let him down a little bit when she didn’t appear on either the big 100th episode or any of the others leading up to the May 19, 2004, series finale.

“I will say, she had her reasons,” Angel executive producer David Fury said in a 2004 interview. “I think there might have been a death of an aunt or something that she was dealing with but, regardless, I guess Joss kind of felt a little bit put off about the way it was done. There was a perceived notion, on both sides, I can say, between Sarah and Joss of ingratitude for both parties. Joss doesn’t feel like Sarah’s ever shown the proper amount of gratitude for what he’s done for her and her career, and I think she feels the same way.” He added, laughing, “I think they’re both crazy.”

Hannigan told Andy Cohenin 2013 that she wasn’t at the time in contact with Gellar, but she’d be happy to see anyone from the show. Two years later, momentously for fans and perhaps the former onscreen BFFs as well, Gellar and Hannigan did reunite for a day of family fun with their husbands and kids. 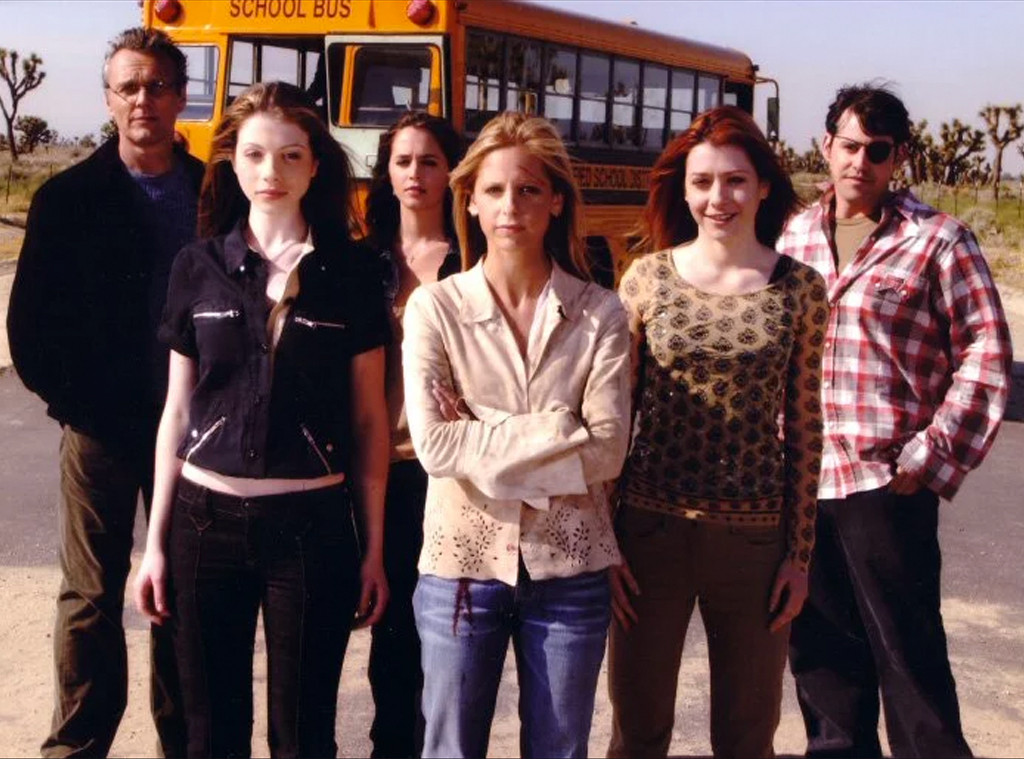 “I’m so incredibly proud of what we all created,” Gellar told EW in 2017. “Sometimes you need distance to really understand the gravitas of that. I appreciate everything about that job. As an actor, all you ever want to do is leave your mark—you want to do something that affects people.”

On Instagram, meanwhile, she paid tribute to the whole experience, writing in part, “Alyson, as any woman knows, you are nothing without the love and support of great female friends, so thank you for being that. Michelle, you will always hold a key to my heart.”

Michelle Trachtenberg played Buffy’s sister Dawn (aka The Key, or so it seemed), who just appeared out of nowhere in season five and Whedon & Co. made it work. In 2014 Trachtenberg and Seth Green visited Gellar on the set of her sitcom The Crazy Ones, sending Instagram into a frenzy. “We do [keep in touch],” Gellar said on Watch What Happens Live, referring to Michelle and Seth. “I mean, you have to understand that Seth and I have been friends since we were 7 years old. Well, he’s older. So he was, like, 9.” She turned to the camera: “Yeah, that’s right, Seth. I said it—you’re older.” And “I’ve known Michelle Trachtenberg since she was probably like 5.”

Trachtenberg, who was about 15 when she joined the cast, told The Hollywood Reporter last year that, as a teenage girl, “of course I had a crush on Angel and Marc Blucas,” who played Buffy’s normal (minus the whole secret-ops thing) boyfriend Riley. “And I was really enamored with watching Drusilla [Spike’s sire, played by Juliet Landau] onscreen. She seemed otherworldly to me.” Interestingly, as a fan she ‘shipped Buffy and Angel, like any warm-blooded human, but “as an actress on set and working with James,” she switched to Buffy and Spike.

Because there had to be rumors of discord during filming, there were of course whispers that Gellar and Charisma Carpenter, who played frenemy Cordelia, had issues in real life. But like so many of those on-the-set feud stories, and regardless of what they might have felt from day to day as 20-year-olds, nothing was going on that would one day taint the memory of the show’s cosmic chemistry (like the recent no-friend-of-mine declaration from Kim Cattrall about Sarah Jessica Parker, for instance). 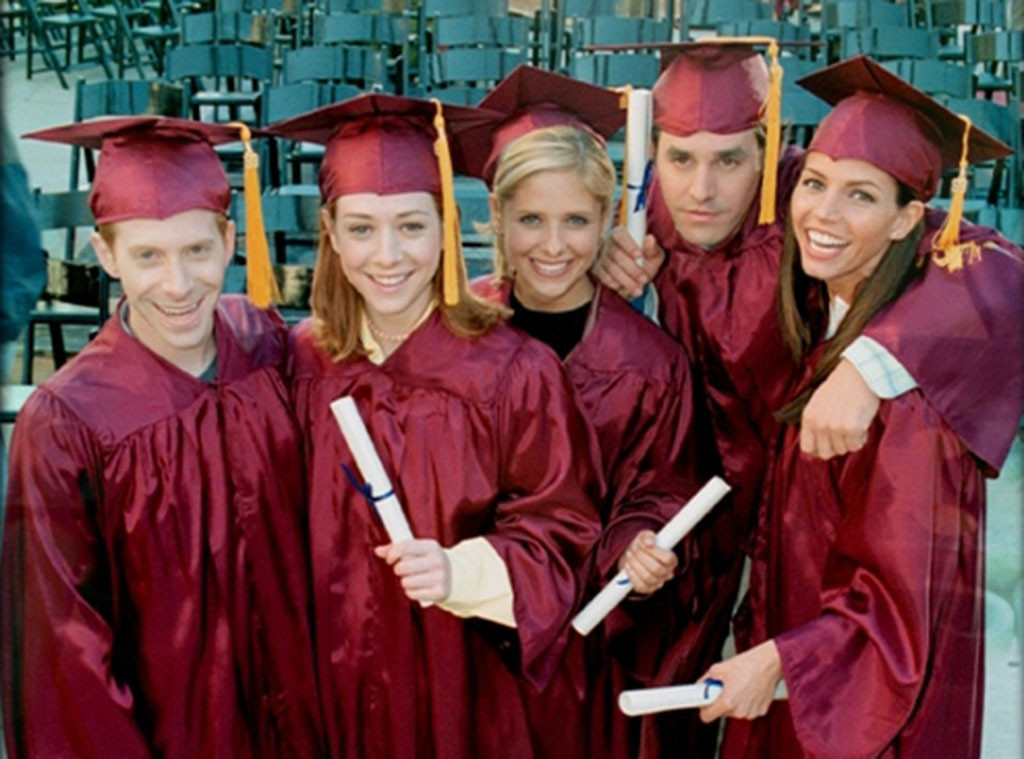 “I loved everybody,” Carpenter told Logo’s NewNowNext in 2013. “I would love to see Sarah again. She’s primarily based in New York now, but I spent a lot of time with her. She’s married, she has kids now, there’s a lot of growing going on for both of us. We left a lot of stuff behind us—the shows, the hours, the characters.

“I think I’d be most interested to catch up with her. She really taught me a lot. I can’t say enough about what I learned from her about getting your marks, hitting your lights, the demands of the role that she was under, the crazy hours. It was an ambitious show. I’d really like to see her again.”

Charisma was spotted hanging out with slayer Faith, Eliza Dushku, in 2015, and she and Gellar got their chance for a catch-up session with EW last year. 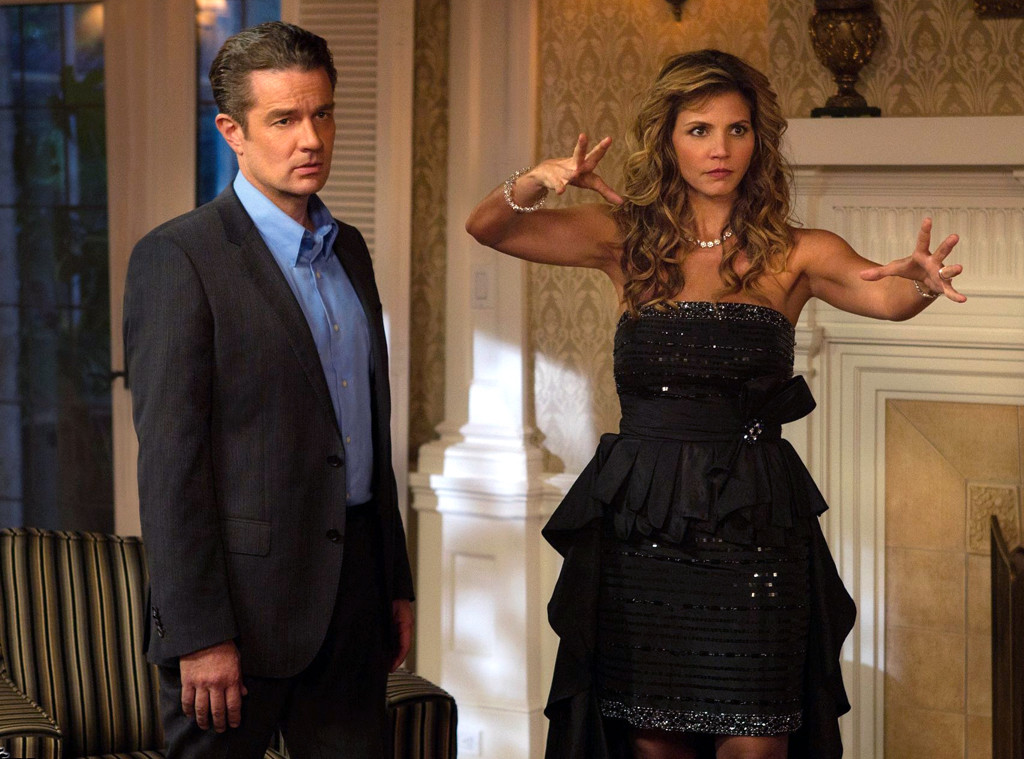 Meanwhile, Carpenter and James Marsters ended up appearing on Supernatural together in 2013 and, according to the actress, they were finally getting to know each other as opposed to reuniting, per se.

They never had one-on-one scenes on Buffy, then on Angel, like in the “100th episode where he tries to bite me, we got to work together a little bit. But we never really had the chance to sit down next to each other and to get to know each other,” Carpenter said. “Or go to the margarita bar next to Paramount! We never had a chance to do that. Our schedules were just very different.” But for Supernatural, “we were sequestered in Vancouver which is one of my favorite cities ever, and our chairs were side-to-side, neither one of us running off to our trailers and we just got to hang. We discussed music, kids and we talked about the shows that we worked on and grew up on, and how funny it is that we’re just now getting to know each other 10 years after the shows are over.”

Carpenter did make some good-enough-to-attend-my-wedding pals from the Whedonverse. She and Clare Kramer, who played season-five big bad Glory, an almost indestructible demon in shopaholic human form, were both at Julie Benz‘s 2012 nuptials. (Benz, who played Angel’s sire Darla, said in Christopher Golden‘s Buffy the Vampire Slayer: 20 Years of Slaying that working with Boreanaz was “easy and fun,” easily her favorite moments from the show.)

Buffy Stars Reunite and Take the Best Photos?See Xander and Anya, Faith and Cordelia Together Again! 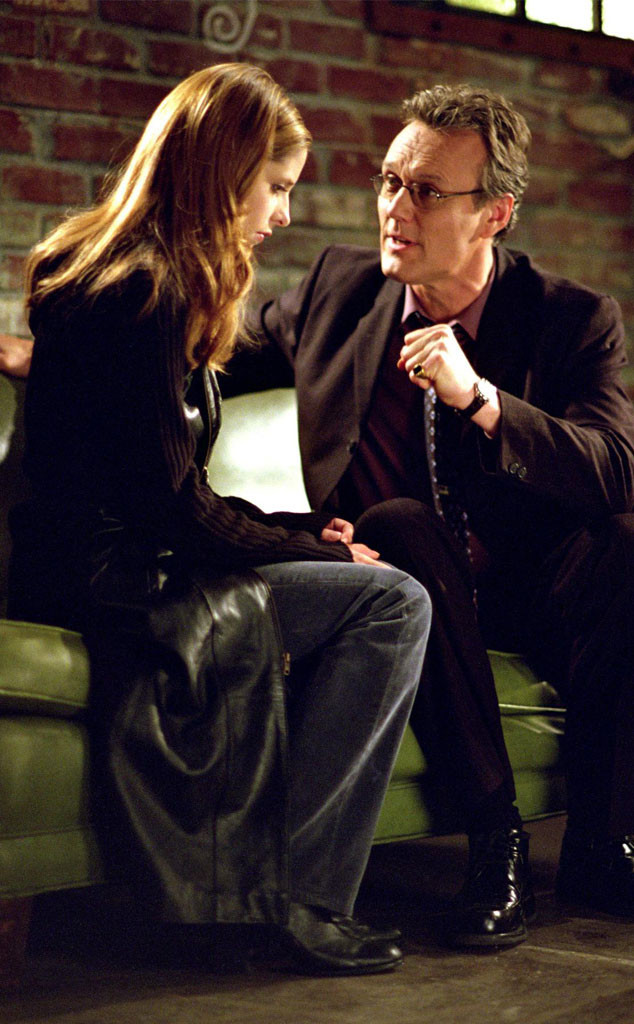 Resident Buffy grownup Anthony Stewart Head, who wasn’t at the EW reunion in person, was quoted in Golden’s 2017 book Buffy the Vampire: 20 Years of Slaying that the crew and cast “were just so lovely, so welcoming. It was really a family affair,” thanks largely to the environment created by Whedon.

His young daughters, Emily and Daisy, would come to the set, he said, and Hannigan and Gellar were like big sisters to the girls. 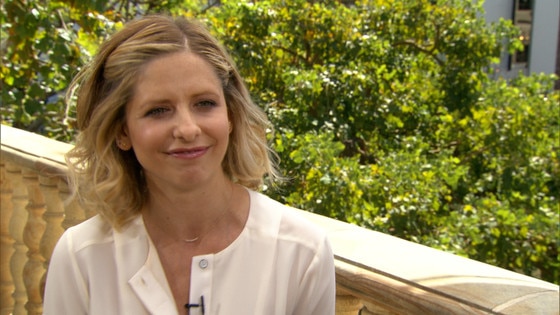 It figures he was the one out of everyone mentioned who couldn’t make the reunion. He did, of course, contribute an interview and tweeted afterward, “Here’s to 20 years and a wonderful group of people x.” 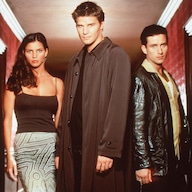 Our Undying Love for Angel: 20 Secrets Revealed About the Brooding Buffy Spin-Off

What really matters though, obviously, is that Gellar and Boreanaz continue to get along.

“David and I will always have a connection and we will always stay friends,” Gellar said on WWHL in 2014. “Not to mention the fact that his show had way better catering than mine… I’m very often motivated by food… A lot of times David will text me when there’s some good food over there and I’ll come and visit. Mainly to get food.”

So that’s why she kept popping up on the set of Bones. All this time, the way to the Slayer’s heart was through her stomach.