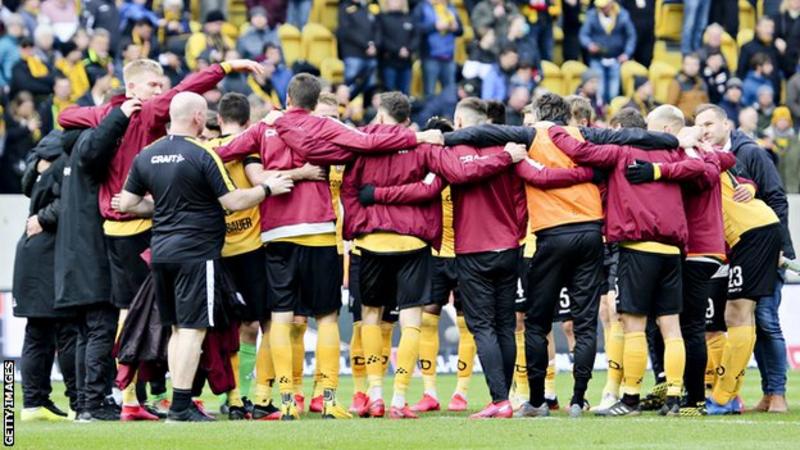 Dynamo Dresden, who play in the second tier of German Football, have put their entire squad and coaching staff into two-week isolation after two players tested positive for coronavirus.

The Bundesliga and Bundesliga 2 are due to restart on Saturday, 16 May.

It is set to be the first European league to restart following the coronavirus shutdown.

“The fact is that we can neither train nor participate in a game in the next 14 days,” said Dynamo.

On Thursday, the German Football Association (DFB) said the season would resume under strict health protocols that ban fans from the stadium and require players to have Covid-19 testing.

About 300 people, including players, staff and officials, will be in or around the stadiums during match days.

The league has been suspended since 13 March. Clubs returned to training in mid-April, with players working in groups.

But on Saturday Dresden, who are bottom of Bundesliga 2, said they would be unable to fulfil the initial fixtures.

“In the past few weeks, we have made enormous efforts in terms of personnel and logistics in order to strictly implement all the prescribed medical and hygienic measures, “said Dynamo sports manager Ralf Minge .

“We are in contact with the responsible health authority and the DFL to coordinate all further steps.”

Dresden were due to resume the season on 17 May at Hannover 96.