Cafes, restaurants and pubs face being hit with another wave of coronavirus restrictions as Australia's top health advisers recommend limiting customers in all non-essential indoor venues.

A cap of one person per four square metres for indoor gatherings has been recommended by Australia's chief medical officers and will be debated by the national cabinet on Friday. 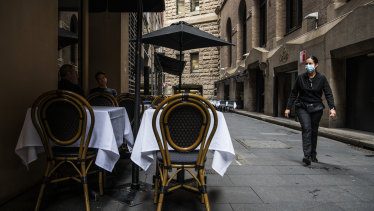 The move could see a 100 square metre venue restricted to 25 people at a time, or cafes and pubs forced to police social-distancing rules through tape and barriers. It is likely to become the third restriction imposed on entertainment venues in a week as the government attempts to ward off shutdowns of schools and transport to contain the coronavirus.

Bans on all non-essential indoor gatherings of 100 or more people, and groups of more than 500 people anywhere are already in place. The measures are expected to last six months and tear through the business models of establishments across the country as thousands of staff are laid off.

The government had been considering an area smaller than four metres to keep more businesses viable but no decision had been made before Deputy Chief Medical Officer Paul Kelly announced the advice on Thursday.

"We've got a density amount. It's about how many people can fit in a room," he said. "Four square metres per person. There will be practical advice to restaurants and to other internal venues to cinemas, so forth."

Clearer guidelines are expected to be issued to businesses on Friday and the measures will not apply to essential activities like supermarkets, schools and transport.

Larger establishments like multi-level pubs will be allowed to have up to 100 people in a room, but the density limits are also expected to apply.

The disease caused by the coronavirus, COVID-19, has now infected more than 636 Australians, with 307 in NSW and 149 in Victoria. Spain and France have ordered residents to stay in their homes, while New York and Los Angeles have directed all bars and restaurants to shut down as the number of cases around the world surges past 218,000. More than 84,000 people have recovered.

Venues across Sydney and Melbourne moved on Thursday to attempt to mitigate the impact, putting signs up in front doors detailing how many staff are on shift and how many patrons can be seated.

The Cooks Co-op in Sackville, north-west of Sydney, said it would pass customers pre-ordered curries through their car windows, while Frankie's Pizza bar in the CBD said you "can't stop rock and roll" and vowed to keep serving 100 patrons in its 400-capacity venue.

Dendy Cinemas announced it would put only 50 per cent of tickets on sale and stagger seating.

Prime Minister Scott Morrison, Treasurer Josh Frydenberg and Finance Minister Mathias Cormann are working on a survival package for thousands of laid-off workers across the country, while the Reserve Bank cut interest rates to a new emergency low of 0.25 per cent on Thursday.

The payments are expected to be announced by the end of the week.