A senior health expert says the Victorian government should consider shutting down the public transport network to stem the coronavirus spread.

However, other medical experts say halting the state's public transport would be a "nuclear button" that authorities could push if the coronavirus gets out of control. 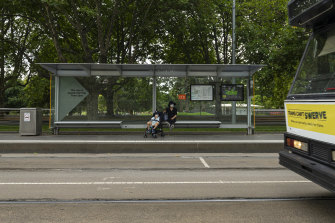 The government says it will continue to operate public transport, albeit with increased cleaning, as it remains an essential service.

Swinburne University Dean of Health Professor Bruce Thompson said the government should do everything in its power, including stopping public transport, to reduce transmission of the virus.

"If the government has said fewer than 100 people should gather, then that makes a lot of sense, but there's more than 100 people on the train, so be consistent," Professor Thompson said.

"We know how this can spread, like in Italy and China … it's going to happen and be a big problem in a few months time, so we need to do everything we can."

But train, tram and bus trips – deemed an "essential service" that is exempt from new bans on social gatherings – should continue as normal for as long as possible to help students, workers and other commuters get around, other experts say.

The advice comes as city and regional rail patronage in Victoria is estimated to have plummeted by about 50 per cent since the outbreak of COVID-19, as people are urged to work from home to avoid contracting and spreading the virus.

It is expected that transport services could shift to a weekend timetable in several weeks' time, as further containment measures are adopted. The trigger point for reducing services is understood to be driver unavailability due to infection or being in isolation.

Shutting down the public transport network would bring Melbourne to a halt, removing a key form of transport for many workers, including those in the health sector who are key to fighting the pandemic. 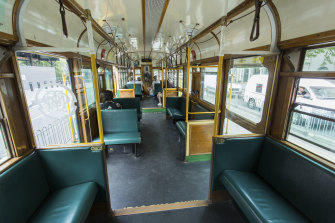 The 35 City Circle tram, usually popular with tourists, had just a handful of passengers.Credit:Not-For-Syndication

All public transport was shutdown in Wuhan to stem the spread of the virus, while up to 40 underground train stations in London have been temporarily closed.

"We don't want to shut down public transport now, but there might come a time in the future where we have to do that," he said.

"Shutting down things like essential services is a thing you only do really late … that's the nuclear button, as it were. But we're trying to slow things down at the moment, we still need to have a functioning society."

Transport planners believe commuters are increasingly relying on their cars to get around.

Yale Zhuxiao Wong, a researcher at the University of Sydney's Institute of Transport and Logistics Studies, said public transport was the "lifeblood" of our cities and would provide a crucial service for health and shift workers during the pandemic.

But Mr Wong said stricter cleaning regimes on transport services should have been enforced earlier on and drivers and public transport staff need to be better protected.

"I'm not advocating for an alarmist mentality, but it's important to be vigilant and not sit on our hands and take a typical Aussie 'She'll be right' attitude. 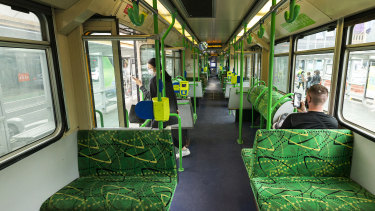 A near empty tram travels along St Kilda Road.Credit:Daniel Pockett

"I give credit where credit is due, there's been a lot happening in the past week, but before that nothing was done beyond the guidelines of washing hands and telling people to stay home."

Victoria's Transport Department has asked passengers to stagger their movements by changing the times they use trains, buses or trams. Those who feel unwell have been told to avoid public transport.

The department ramped up its cleaning measures on Tuesday. Those measures include nightly sanitation on trains, trams and buses, during which all surfaces are wiped down.

Trams will undergo a deep clean before each service, with stop buttons, hand rails and grab straps to be sanitised. Train carriages will be sprayed with disinfectant nightly and buses will be fumigated every three days.

Transport operators will continue running the public transport network as normal, but expect there may be some cancellations due to driver illness.

A Department of Transport spokesperson said it was working closely with operators to ramp up cleaning.

“There is close coordination between the Department of Transport, public transport operators and DHHS on cleaning regimes, the use and supply of protective clothing and hygiene products for staff.”

“We’ve seen an overall reduction in the number of people using the public transport network as more people opt to work from home.”

“Public transport is an essential service, and we’re continuing to operate trams, trains and buses across the state as normal.”

By mid-afternoon Saturday, 229 Victorians had been diagnosed with coronavirus, with 1051 cases across Australia.