Scattered for kilometres, high up in tree branches and peeking out of muddy grass, rubbish is everywhere along the Merri Creek.

The older plastic has faded in colour and shape, but the bright greens, blues and reds of newer shopping bags wrap around unreachable branches that hang over the water. 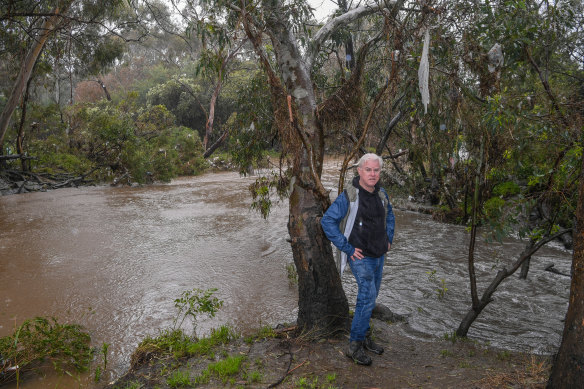 Plastic and other waste already regularly wash into the Merri, but recent flooding has left rubbish strewn across vegetation and the creek bank for kilometres.

Melbourne Water concedes it could be up to three months before it can complete a clean-up of the creek, which runs through the city’s northern suburbs.

The muddy and slippery state of the ground around the creek, which peaked at 4 metres in the Brunswick-Northcote section on October 14, means works to start removing rubbish cannot start until the ground dries.

Residents say the floods and a lack of clarity around who is responsible for the clean-up has left the creek in poor condition. 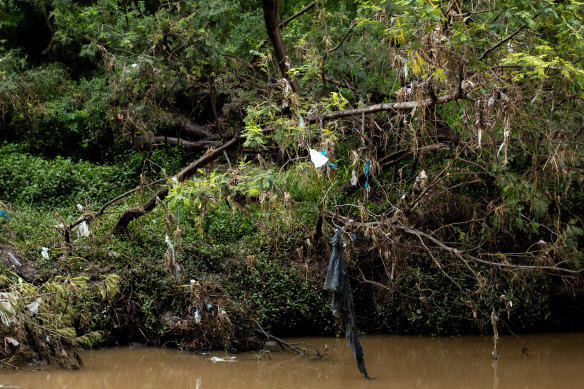 Plastic along the banks of the Merri Creek. Credit:Esther Linder

“The amount of garbage that goes into the Merri Creek and other waterways is gross and completely unacceptable,” said Peter Ewer, from the Friends of the Merri Creek community action group.

“It’s left to the community groups like ours to clean up the crap that the packaging companies are happy to fling into the environment.”

The group runs regular working bees, where 30 to 40 people volunteer for a few hours to remove rubbish from the creek’s ecosystem.

While there is no consistent data for waste collected from the Merri, the Yarra Riverkeeper Association estimates it has removed more than 38 tonnes of rubbish from the Yarra over four years.

While Friends of the Merri conduct regular clean-ups, Melbourne Water is technically in charge of the waterway’s health, which extends to rubbish collection.

Melbourne Water said it planned to soon begin removing rubbish, depending on when the creek’s banks would dry, but conceded the clean-up could take months.

“The timeframe to start the clean-up depends on weather conditions, however we anticipate it will begin in November and continue for many weeks,” a spokesperson said.

“Given the large scale of litter and debris across the entire waterway and drainage network, we estimate the clean-up at Merri Creek will take one to three months.” 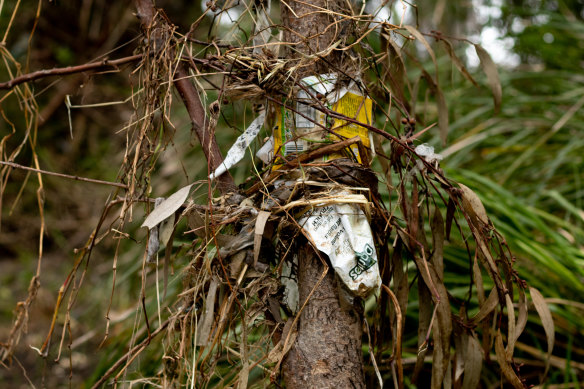 Rubbish along the Merri Creek.Credit:Esther Linder

Melbourne Water estimates it spends about $3 million annually on removing rubbish from the city’s waterways, and says it encourages the community to bin litter to prevent it ending up in creeks such as the Merri.

Luisa Macmillan, manager of the not-for-profit Merri Creek Management Committee, said the extreme level of waste in the creek was “deeply distressing because of what it represents for the ill-health of our waterways”.

“It’s these high-flow flood events that seem to flush everything out of drains and deposit it in the creek,” Macmillan said.

“The most significant concerning matter really is the massive amount of rubbish, especially plastic and litter that now that the water level’s gone down, is now caught in the surrounding vegetation and branches, like a bizarre and unwelcome Christmas decoration.

“I’ve had frustrated local residents emailing me asking, ‘Who’s responsible for the clean-up?’”

Macmillan said overhanging branches and steep banks meant some areas couldn’t be tidied by the public because of safety and access concerns.

“We’d love to see a concerted effort by the relevant authorities. To be frank, it’s such a huge job that if the community can help, that is fantastic and really welcome. But we can’t expect the community to do it all,” she said.

A Darebin Council spokesperson said the clean-up along the council’s section of the creek in Northcote was completed inside two days, and the municipality was “in the fortunate position not to be severely impacted by the recent floods”.

Merri-bek Council envelops the Merri between Coburg and Brunswick East, and several public parks, sports fields and shared paths were sources of litter.

Merri-bek Mayor Mark Riley said the council worked with Melbourne Water to cover all areas of the creek.

“We also greatly appreciate the work of local groups in holding community events to pick up litter year-round,” he said.

Melbourne Water said it would work with the councils to prioritise areas for cleaning.

Macmillan said while crews were still working to clean up flood damage, the Merri Creek looked like “a dark, contaminated sewer”.

“We don’t give enough priority to the environment,” she said.

Most Viewed in Environment