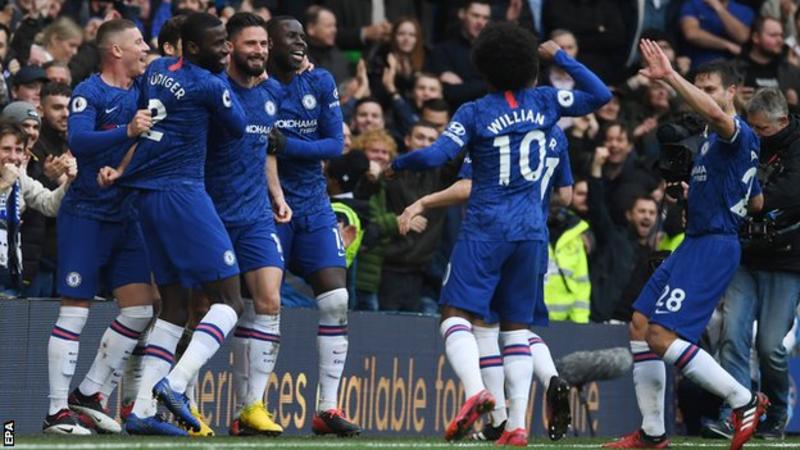 Carlo Ancelotti endured a miserable return to Stamford Bridge as Chelsea thrashed his Everton side to boost their top-four Premier League hopes.

Helped by the inclusion of 18-year-old Billy Gilmour, who made his full Premier League debut, Chelsea started the game with a far greater tempo and went ahead after 14 minutes when Mason Mount ended an 18-game goal drought by firing past Jordan Pickford at his near post.

Pedro then latched on to a superb through ball by Ross Barkley to score his first league goal of the season as Frank Lampard’s side took control.

Everton had a chance to strike back five minutes later but top scorer Dominic Calvert-Lewin duffed a shot with only Kepa Arrizabalaga to beat.

Two goals in the space of three minutes shortly after the break ended the game as a contest as Willian found the bottom corner with a low shot and Olivier Giroud continued his renaissance with a tap-in from a short corner.

Everton have been in form since Ancelotti’s first game in charge on Boxing Day, during which time they have picked up 18 points.

But this was a desperately disappointing day for the Italian on his return to the club where he won the league and FA Cup double in 2009-10.

Including two wins over Tottenham boss Jose Mourinho, Lampard now has three victories over former Chelsea managers this season as fans serenaded him with “super Frank” from all four sides of the stadium. 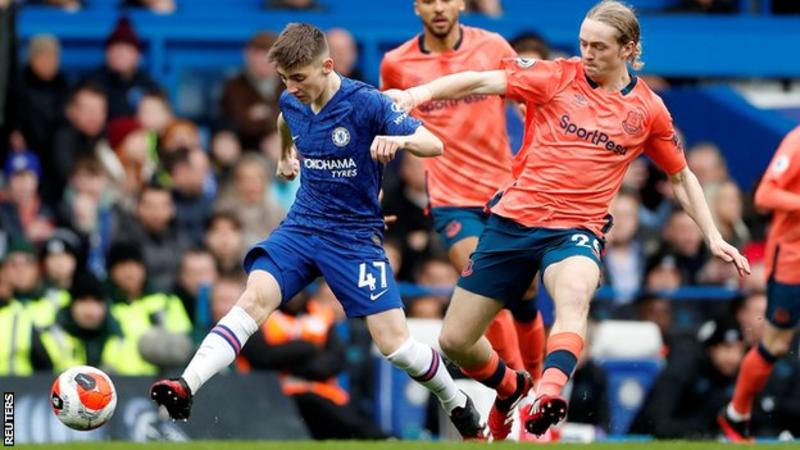 Gilmour’s first Premier League start came after a man-of-the-match performance in their FA Cup fifth-round win over Liverpool on Tuesday.

That game appeared to give the club a lift after a disappointing run of one win in six league matches, and the glow continued against Everton.

Gilmour offers a quicker alternative to Jorginho, suspended for this game, at the base of their midfield, and the young Scot seemed to have an effect on those in front of him, who played with extra vigour.

Mount had already tested Everton goalkeeper Jordan Pickford, who had a very good game, before he scored.

But he celebrated his sixth goal of the season with genuine relief after struggling to match his early-season form in the past couple of months.

Pickford, who was criticised after conceding against Manchester United last Sunday, made another smart save from Willian, but could do little when Barkley proved a point to the booing Everton fans by slicing his former team open for Pedro to score his first league goal in 13 months.

Aside from Calvert-Lewin’s chance, which came from a mix-up between Marcos Alonso and Kurt Zouma, Chelsea continued to press for a third.

And they wasted little time after the break in extending their lead as Willian scored his seventh of the season with a superb strike and Giroud showed his quality at the point of Chelsea’s attack with his second goal in three league games.

Such was Chelsea’s dominance that they could afford to hand Premier League debuts to teenagers Tino Anjorin and Armando Broja off the bench.

For Lampard and Chelsea, it was one of those games where everything clicked.

The only concern was for Mount, who came off after appearing to suffer the effects of a heavy Everton challenge early in the second half. 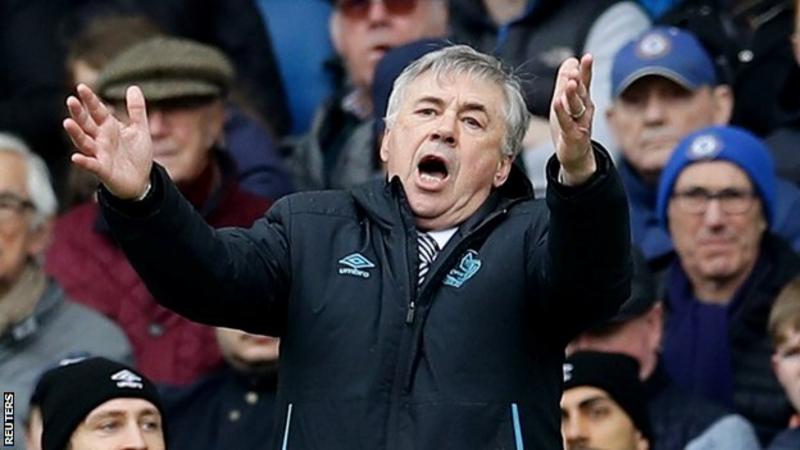 Ancelotti admitted he would be “emotional” on his return to west London after spending two seasons with the club.

Despite being sacked for finishing second in the league following his Double-winning campaign, the Italian said he had an “unbelievable” time at Chelsea, and he could have used the same word on Sunday, but for altogether different reasons.

His appointment has been greeted with enthusiasm and delight by Everton fans, and he was cheered by Chelsea supporters before the game.

But that mood was brought crashing down to earth as the visitors were outclassed. In fact, had it not been for Pickford, the scoreline could have been even worse.

Similar to their draw with Manchester United, Everton started poorly, but at least there was a second-half upturn at Goodison Park. Here there was no improvement after the break.

Having opted to play Bernard on their right side, Ancelotti appeared to undo that decision by changing formation midway through the first half with the Brazilian midfielder being replaced at half-time by Theo Walcott.

That change had little time to have an effect as six minutes after the interval Everton found themselves further behind.

Ancelotti’s side have been unbeaten at home since he took over, but they have now lost three league games on their travels and their midfield looked slow in comparison to Chelsea’s.

Calvert-Lewin was also outmuscled by Zouma at times and, after scoring eight goals in his last 10 league games, he had an off day which summed up Everton’s afternoon.

It leaves the Toffees, who have not earned an away clean sheet since the opening day of the season, struggling to reach their Europa League target with games against rivals Wolves, Tottenham and Sheffield United to come.

It was also the first time they had failed to score in 12 games under Ancelotti, who still has plenty of work to do with this team to turn them into European contenders this season or next.

Mason Holgate (Everton) is shown the yellow card for a bad foul.

Attempt missed. Marcos Alonso (Chelsea) left footed shot from outside the box misses to the right. Assisted by Ross Barkley.

Faustino Anjorin (Chelsea) wins a free kick in the defensive half.

Richarlison (Everton) wins a free kick on the left wing.

Attempt missed. Billy Gilmour (Chelsea) right footed shot from outside the box misses to the left. Assisted by Ross Barkley following a corner.

Attempt saved. César Azpilicueta (Chelsea) right footed shot from outside the box is saved in the bottom left corner. Assisted by Ross Barkley.

Kurt Zouma (Chelsea) is shown the yellow card for a bad foul.

Richarlison (Everton) wins a free kick in the attacking half.

Kepa Arrizabalaga (Chelsea) wins a free kick in the defensive half.

Attempt blocked. Richarlison (Everton) right footed shot from the centre of the box is blocked.

Richarlison (Everton) wins a free kick on the left wing.

Attempt missed. Faustino Anjorin (Chelsea) right footed shot from outside the box misses to the right.

Attempt saved. Ross Barkley (Chelsea) right footed shot from the left side of the box is saved in the bottom left corner. Assisted by Pedro.

Attempt missed. Antonio Rüdiger (Chelsea) header from the centre of the box is close, but misses to the right. Assisted by Willian with a cross following a corner.

Attempt saved. Ross Barkley (Chelsea) right footed shot from outside the box is saved in the centre of the goal.

Pedro (Chelsea) wins a free kick in the attacking half.

Attempt saved. Pedro (Chelsea) right footed shot from the centre of the box is saved in the bottom left corner.