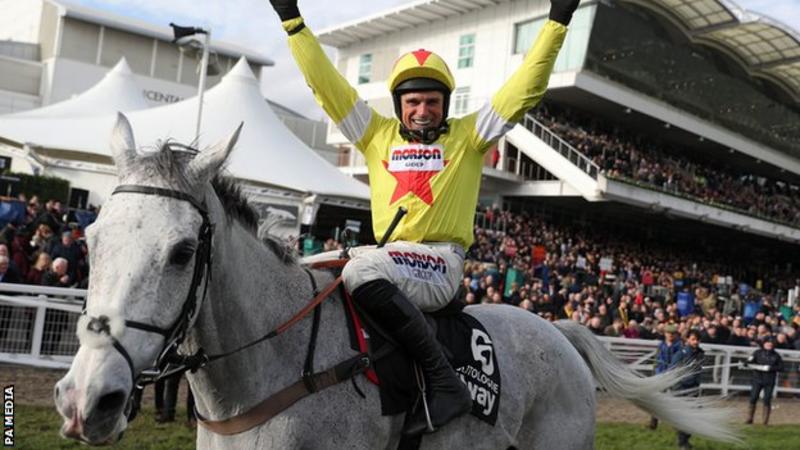 Defi had gone off as the red-hot 2-5 favourite in the absence of Altior and Chacun Pour Soi.

But he was never in it as the 6-1 winner, ridden by Harry Skelton who was having his first ride in the race, jumped superbly and finished strongly.

It is the first winner of the 2020 Festival for trainer Paul Nicholls.

“I had said I wasn’t going to run him to make sure he was fresh.

“The tactics where great, it was awesome. I looked in the paddocks before and I thought Politologue was a standout, and I’m just pleased we stuck to the plan and kept him fresh and fit.”

Some of the sheen had been taken off the race when first hat-trick-chasing Altior was pulled out on Tuesday after being found to be lame and then Chacun Pour Soi was withdrawn on Wednesday morning with an abscess leaving just five runners.

It meant Defi du Seuil was the one to beat but it was Politologue, who had run four times at the Festival without a victory, who was the one to take advantage with stablemate Dynamite Dollars (7-1) second and outsider Bun Doran (33-1) third.

It was a third Champion Chase victory for owner John Hales, who previously enjoyed success with One Man in 1998 and Azertyuiop in 2004.

“That was brilliant. We dictated it from start to finish. Tactically, Harry got it absolutely right,” he said.

“In his previous race we thought they’d gone too slow, so I said ‘make your own pace’.

“If that means going on from the start, run the finish out of them – and that’s what he did. I’m over the moon – my third Queen Mother.”