Experts predict demand for coal will peak in 2026 as the growth in renewable energy continues to outstrip forecasts, with the International Energy Agency predicting a 60 per cent growth in global clean energy generation over the next five years.

The optimistic outlook for clean power in the International Energy Agency’s annual renewables market report poses a fresh test for the Labor Opposition, which is yet to announce its climate policy ahead of the federal election due by May. 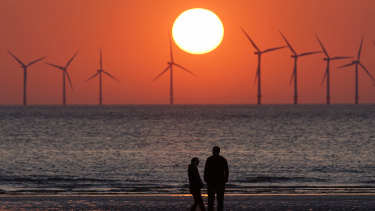 Renewables are set for another five years of record growth, the International Energy Agency says. Credit:Getty

The Coalition government’s recently released climate plan backs gas as a key fuel for coming decades and it remains to be seen how Labor responds when it reveals its policy in coming days, with the federal leadership eager to appease the left and right of the party.

Blue-collar unions want to avoid a looming scare campaign from the Coalition over jobs and economic losses under ambitious emissions reduction targets, following a similar campaign at the 2019 election. This masthead revealed on Wednesday Labor will dump a plan to set vehicle fuel emissions standards following contested claims from the Prime Minister it would raise petrol prices.

On the other side, the environment movement within Labor is looking to gain ground in urban electorates with ambitious climate action, including a campaign on jobs and growth in the green economy.

The IEA said the clean energy expansion is being driven by 130 countries, which together account for 90 per cent of global GDP, and the “ambitious net zero goals” they’ve set, as well as the continuing cost reduction in wind and solar energy generation.

“This year’s record renewable electricity additions of 290 gigawatts are yet another sign that a new global energy economy is emerging,” said IEA executive director Fatih Birol.

The report said renewables are set to account for almost 95 per cent of additional global power capacity in the next five years.

“I see a conflict between short-and-medium term demand for coal, which is still increasing, and the longer-term decline we expect,” Mr Simington said.

“China has said it won’t finance any overseas coal plants, but they’re financing quite a lot in China and coal production and consumption there is on a bit of a tear.”

“Renewables are the cheapest form of bulk electricity in almost every country in the world” except for two major markets – Indonesia and Japan, Mr Bhavnagri said.

“Our expectation has been for peak coal usage in the mid-2020s and that’s sooner than most people have expected, but it could be sooner still.”

The IEA said renewables face a number of challenges such as rising prices for critical minerals required for solar panel and wind turbine manufacture, rising global electricity prices, COVID disruptions to international supply chains and availability of raw materials. However high fossil fuel prices, including the recent price spike in thermal coal, counterbalanced these factors and improved the competitiveness of renewables, the IEA said.

“Clearly, when you take the IEA’s forecast report plus all the pledges at COP26 (the UN’s climate conference) to phase out fossil fuels you have to say the tide has turned,” Ms Hillis said.

“If you’re planning a new energy project and you want to secure a loan for it, it’s getting very difficult for thermal coal. We are seeing companies, including in Australia, that are self-financing their projects and that means they hold all the risk of project development.“