This year has seen two comets making their way through the solar system, only to disintegrate as they approached the Sun. Comet ATLAS and Comet SWAN made headlines this year as astronomers spotted the bright space rocks making their way towards the Sun.

Researchers had been hoping to analyse how the comets acted as they approached the Sun, and were hoping the comets would become visible to the naked eye.

However, Comet NEOWISE is making up for its predecessors, putting on a spectacular viewing which is visible to the naked eye.

The comet passed Mercury’s orbit on July 3, meaning it is close enough to the Sun that our host star is beginning to wreak havoc on the huge, dense ball of ice and rock.

NASA has been getting involved in the hype, releasing close up images of Comet NEOWISE. 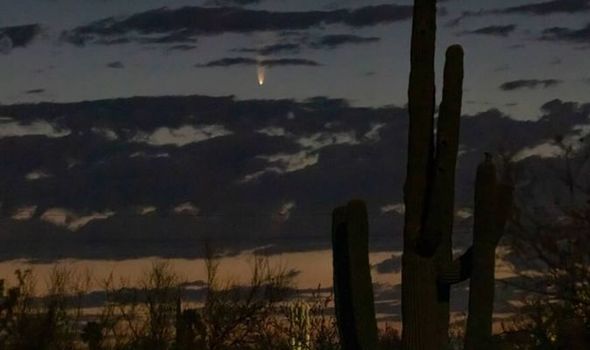 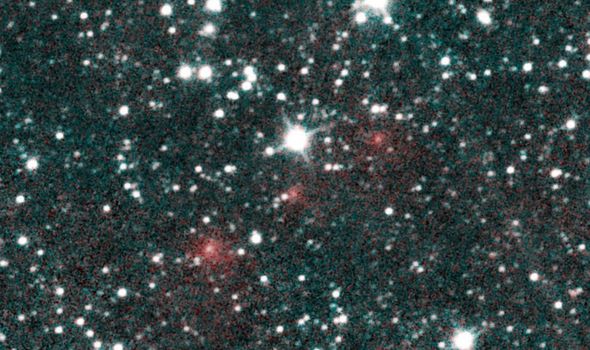 The space agency said: “The comet cruised just inside Mercury’s orbit on July 3. This very close passage by the Sun is cooking the comet’s outermost layers, causing gas and dust to erupt off the icy surface and creating a large tail of debris.

“And yet the comet has managed to survive this intense roasting. People wishing to catch a glimpse of the glowing comet can spot it as it swings through the inner solar system, but its nearness to the Sun creates some observing challenges.

“For the next few days it will be visible about an hour before sunrise, close to the horizon in the northeastern sky in the United States.

“Observers might be able to see the comet’s central core, or nucleus, with the naked eye in dark skies; using binoculars will give viewers a good look at the fuzzy comet and its long, streaky tail. 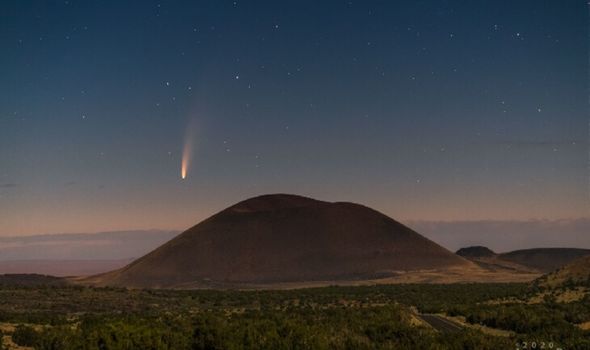 “As it speeds away from the Sun, Comet NEOWISE will begin to make its appearance in the evening sky shortly after sunset on July 11.

Amy Mainzer, NEOWISE principal investigator at the University of Arizona, said: “In its discovery images, Comet NEOWISE appeared as a glowing, fuzzy dot moving across the sky even when it was still pretty far away.

“As soon as we saw how close it would come to the Sun, we had hopes that it would put on a good show.”

Joseph Masiero, NEOWISE deputy principal investigator at NASA’s Jet Propulsion Laboratory in Southern California, added: “From its infrared signature, we can tell that it is about 5 kilometres [3 miles] across, and by combining the infrared data with visible-light images, we can tell that the comet’s nucleus is covered with sooty, dark particles left over from its formation near the birth of our solar system 4.6 billion years ago.”